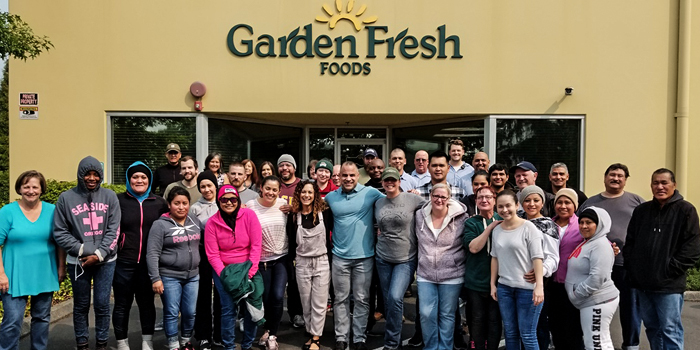 Core values represent a small set of vital, timeless, and fundamental guiding principles for an individual or organization. In the business world, they’ve almost become cliché since the height of their popularity in the mid-1990s, but that does not negate their importance for those disciplined and persistent enough to both define and live by them. On an individual level, they help inform our worldview and serve as a rudder in a sea of ideas and opportunities.

I began defining the core values of Garden Fresh Foods, the company I run with several fantastic managers and my wife, Christina. The process proved challenging and eye-opening with a multitude of cross-over applications to my bodybuilding career.

Two primary obstacles stand in the way of most companies or individuals defining their core values and gaining professional or personal traction.

Defining core values begins with writing what’s of primary importance and then distilling it to a few keywords and phrases. Coincidentally, core values exist in every organization; however, left formally undefined, they may simply mean the company is led by the wrong set of values. It requires discipline to step back and take a 10,000-foot view of an organization, particularly when every day feels like a firefight. Regardless, you must remain disciplined enough to back away from the trees to see the forest.

It’s no different in bodybuilding. Unrelenting discipline trumps undisciplined talent all day long. I took the long view with bodybuilding from the moment I turned pro. Whatever of the length of my bodybuilding career, I wanted to leave the sport with my marriage and health intact. Remaining disciplined to these values resulted in 14 years of competing in over 35 professional competitions, 21 years of marriage, and no health issues to date. It also cost me a winless streak of 12 years after I won the 2004 USA Overall, but winning wasn’t my primary core value.

Once core values are defined, persistence is necessary to ingrain them in the fabric of your business. Posting them on a wall won’t get the job done. You must train everyone in the company up to seven times before they become a way of life, which takes time and persistence. It makes little sense to define core values without the persistence required to effectively share and live them personally and corporately.

The same held true in bodybuilding. I competed in 29 events before my first pro win. Persistence often looks like quiet, yet active, patience in the face of people telling you it won’t ever happen. Sometimes, persistence looks like robust waiting. Winning mattered to me as I’m highly competitive. It just didn’t rank above my marriage and physical health on the list of my priorities.

The flip-side to the obstacles of effective core values are the benefits of those disciplined and persistent enough to define and institute them.

Defining core values in some regards equates to defining the culture of the company. It’s not surprising that an organization lead by a jackass tends to breed a slew of management jackasses. It trickles down and becomes the DNA of the organization. Defining, communicating, and living your core values will create a lasting company culture and attract like-minded individuals.

In similar fashion, I was drawn to companies within the bodybuilding industry based on core values that aligned well with mine. This is why I signed with Weider Publications the weekend I won my pro card, spent eight years with Nutrex Research, and four years with Biotest. Those former companies, particularly during my tenure, are the reason why I currently write for elitefts is because I believe in their core values. Regardless of your profession, collecting a paycheck is nice, but working for a company with shared values is priceless.

In business, core values ought to drive the decision-making process for everything, including hiring and firing. The hard truth is once defined and pushed out, core values quickly reveal those with whom you must part ways. Thankfully, the majority of the time you won’t need to go on a firing spree because those who don’t embrace the values at the core of the company most often quit on their own accord. It doesn’t mean they are bad people; it means they don’t fit into your culture.

The clarity of my values in bodybuilding is why I didn’t work with many “gurus” over the years. Very few of them shared my core values and priority list. I flew solo for 85% of my career until I met John Meadows. Yes, John is a brilliant trainer and coach, but more than anything, we shared similar core values. This made working with him easy because we never clashed over priorities because they were informed by our foundational and shared values.

Below are Garden Fresh Foods’ core values. It’s no coincidence that most of these same values extend into my personal life. If the person at the helm neglects to live by the values he or she claims to espouse, it leaves no room for criticism of others in the organization who are failing to embrace the company’s core values. Leaders must lead by example. Leaders must go first.