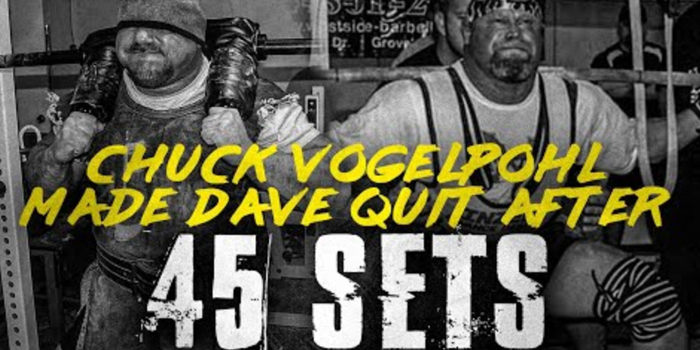 “Can you elaborate on the story about you challenging Chuck (Vogelpohl) and it turning into a 45-set dynamic day?”

According to Dave Tate, Chuck had just gotten out of his neck brace after he’d broken his neck (“Matt Dimel broke it”) and had been squatting for a couple of weeks.

For some reason, Louie Simmons let someone borrow the monolift for a meet that everyone except Dave, Chuck, and Louie were attending. Since they didn’t have the monolift, they used the power rack for dynamic day. The weights were set at 405 for box squats.

“I’m at my peak at this point in time. I mean, I’m probably the strongest at that point in time than I’ve ever been. Conditioning was on point.”

Dave was on Week 1 of a four-week wave and it was easy for him. Chuck, in the meantime, was struggling. After a couple of sets, Dave thought, “I have this motherfucker. If I’ve got any shot at this guy, I might have it.”

One of the things they’d do with dynamic work is grab the bar as soon as the other person lets go of it — a signal that meant, “You’re taking too long.” That would’ve pissed off the person who just finished the lift. Essentially, grabbing the bar was a way to start shit.

So, Dave grabbed the bar from Chuck; since they were lifting in a power rack instead of the monolift, they were in a tighter spot to face off. This really raised the tension.

They’d go back and forth after each set until the other person gave up.

“I dialed back because I had already learned by this time that when you get called out on shit like that, you stop squatting with compensatory acceleration; you just start standing up with 405. So you squat so it doesn’t look like you’re loafing but you’re not putting 800 pounds of effort into it. You’re saving yourself.”

Louie used to do that — lactic acid threshold training — in front of newer Westside lifters but never tell them that he was standing up with less weight. Chuck was the one who explained Louie’s “trick” to Dave. And for some reason, Dave figured he could use that when going back and forth with Chuck and it would work.

Their sets kept going up, and Chuck started to look tired. When the other person’s looking tired, that’s when you might try to up the ante (or the weights) and crush their spirits.

Dave recalls Louie sitting there shaking his head after the first 20 or so sets, probably thinking this was the stupidest thing he’s ever seen, but he didn’t stop them.

Finally, their sets hit 40, and Dave was struggling. Then Chuck nailed the next couple of box squats.

At that point, Dave tapped out. Sure, he could’ve gone through a few more rounds, but the fact of the matter was he wasn’t going to be Chuck.

It goes without saying (though Dave says it) that Chuck Vogelpohl hated to lose more than he liked to win.

Top Workout Fails Of The Week: All Pain, No Gain, All Cringe

Where to Watch UFC 246: McGregor vs Cowboy