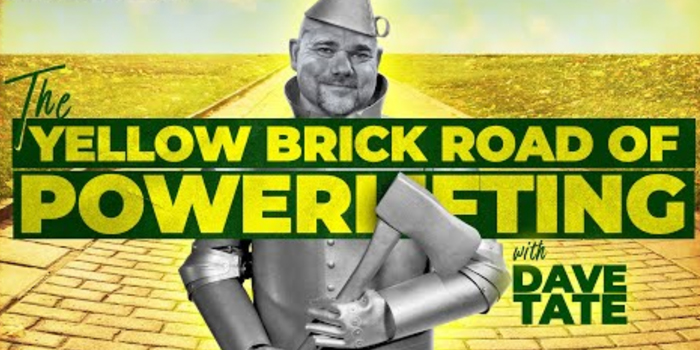 In one way or another, Dave Tate’s been involved in powerlifting since 1982 — so roughly 37 years.

Basically, he’s done everything he can for the sport: training, competing, coaching, judging, hosting meets, programming, gym managing, and of course, starting up elitefts as an educational resource for powerlifters and fitness equipment company for anyone.

The only thing Dave hasn’t done is own a federation.

“I kind of know the sport inside and out. It’s very similar to The Wizard of Oz, right?”

In a way, they’re all looking for the same thing: The Wizard of Oz, who’ll grant them their wishes.

As it turns out, Dorothy and her friends had what they needed the entire time. Dorothy was able to go home thanks to the ruby slippers she was given upon crash-landing in Oz (or maybe you interpret it as her waking up from a dream); the Tinman had a heart; the Lion had courage; and the Scarecrow had a brain.

“They were always in that place. That place is that fucking 8×8 platform that’s got a squat rack, a bench, and a deadlift bar on it, right? That’s the sport of powerlifting. The journey that you take — a lot of people will take different journeys; there’ll be meeting people, there’ll be different needs and wants behind that — lead your to a place that could be greater, but it all ends up to being the same fucking 8×8 platform with a chalk pool, weights, and a bar.”

Just remember: If you’re competing in powerlifting, don’t bother to look behind the curtain. You’ll find a lot of it to be fake and bullshit — so keep your eye on the prize and don’t look behind that curtain.

The Post-Surgical Knee: The Range of Motion Rebuild

Conjugate for Throwers—Putting Your Athletes on the Right…