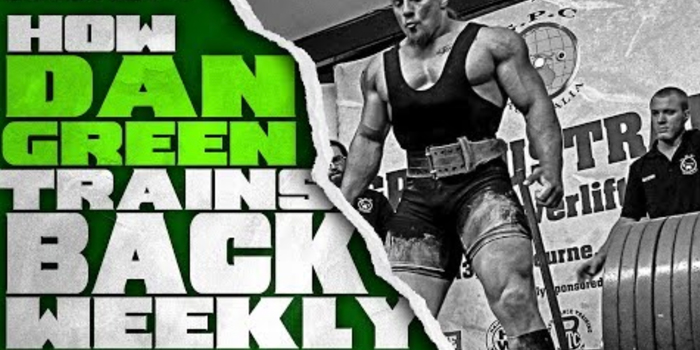 In 2017 and early 2018, Dan Green spent a lot of time training his back with the conventional deadlift, pause-deadlifts, bent-over rows, and deficit pulls and deficit stiff-legged deadlifts.

Training the back is so important that Dan trains it three times a week, and Dave Tate agrees with that:

“I do feel the back is the engine of the powerlifter. You could almost not train anything else but just pound the shit out of your back four times a week and still be strong.”

So, how often do Dan and Andrew Herbert train their backs? What do they do to train?

Andrew finds benefits from barbell good mornings, where the stress is on the low bar position, or with an SS Yoke Bar that puts stress higher and makes the lift harder. His three main basic staples for back training are barbell bent-over rows, dumbbell rows, and pull-ups. He trains upper body twice a week, including the back, with a horizontal and vertical pull.

Dan used to train pulls and pull-ups every workout five to six times a week, but he’s changed his routine. Now, after his squat days (usually on Monday), he’ll do good mornings or stiff-legged deadlifts. Then, on Tuesdays, he’ll come back and do what he calls a “bodybuilding back day” with heavy bent-over rows or heavy T-bar rows. Finally, he deadlifts on Friday.

He’ll vary the weights on each day depending on how he’s feeling, waving between light, medium, and heavy days.

The Rise of Live Stream Conferences

How to Become a Successful Columnist for elitefts

This Bodybuilder Faced Major Backlash for Her Breastfeeding…

How to Write Your Own Program