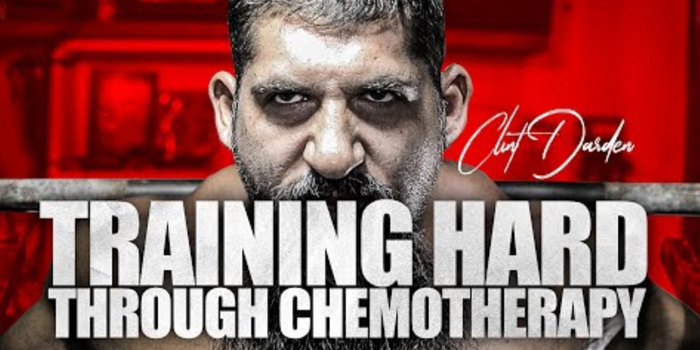 “Was training hard while doing chemo a good idea?”

RELATED: How to Get Through a Near Career-Ending Injury

Three weeks later, he got a nosebleed pulling 380 pounds as a partial deadlift.

“And it was everything I had.”

Despite that, Clint believes training hard while going through chemotherapy was a good idea. There was nothing else he’d rather do and no place he’d rather be.

He tells a story he’s only shared with his close friends — until now.

“I remember eating lunch with my family and going, I couldn’t finish my food. I went out to get into my car and I couldn’t drive to the gym, I was so sick, I was getting carsick driving myself. I had taken my gym bag and put it in the trunk of my car and I came back inside, threw my bag down, and my wife was like, ‘What’s wrong? Why aren’t you going training?’ and I said, ‘I can’t drive. Physically, I can’t get to the gym.’ And she said, ‘Go get your bag. Put it in my car.’ So I got my bag, put it in her car, and she drove me from the house to the gym.

“It’s normally a 15-minute drive, and it took us about a half hour to get there because she had to pull over for me to puke every couple of minutes. We got to the gym. She dropped me off. I went inside the gym, and I don’t know where she went — I’m sure she just parked at the church down the street — but she said, ‘I’ll be back in two hours.’ And I went inside.

“I was doing weightlifting at the time. I put on my Adidas shoes, got on my fancy tight shorts, my knee sleeves, wrist wraps, and I taped my thumb. I’ve got a photo that I took because that’s all I could do. But I sat there for two hours in the gym, and I just looked — and it’s the smells of the gym, the chalk on my hands, the tape on my thumbs, the smell of my neoprene sleeves — I remember looking over there and thinking, ‘You know what? In a few months, when I get healthy, this is what I’m going to do. I’m going to squat, I’m going to snatch, and I’m going to rotate these exercises.’

“And all I did for two hours was sit there. My wife came back two hours later and she sent me a text message, and she said, ‘You know, I’m outside.’ And I said, ‘I can’t change clothes. I’m inside. I’ve got to have your help. I don’t have the energy to change clothes.’ So she came inside got me out of my gym clothes, got me into regular clothes, got me back in the car, and took me home.

“She did that several times, and it got to the point to where she did that so often that she began going to the gym and training with me, just because if she was going to be there anyway, might as well train.

“And I think that brought us a lot closer together, and we trained for a long time with the exact same bar and the exact same weights, and we had a lot of training sessions where she would beat me every single day in the gym on the snatch, clean and jerk, squat, front squat, deadlifts for months and months at a time, she would beat me.

“If I can get to the gym, I will. I’ll do something. I can say that even if I can’t train, I can sit there and make plans. But there are things you can do and sit here in this gym and just look out at the equipment, and you can make plans. It’s stuff you can’t do at home. You can’t just sit at home with a notebook, pen, and paper and come up with plans. Not as good as you can if you’re here at the gym. You can smell it.”

BCAA Plus Glutamine Capsules Review Your clear path to a…

WATCH: 17 Band Exercises Powerlifters Can Do at Home

Three Questions You Should Ask Your Chiropractor