The Post-Surgical Knee: The Range of Motion Rebuild 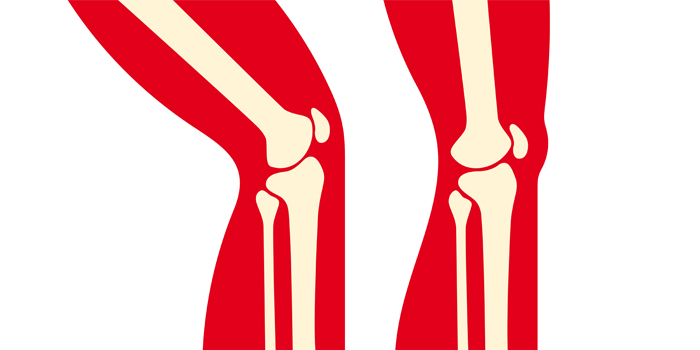 The definition of rehab is “A course of treatment for drug or alcohol dependence, typically at a residential facility.” There is, however, no direct definition of injury rehab, in that the rehabilitation of injuries can often encompass a range of different meanings. Injury rehab is often thought of as the process of healing an injury enough to where a person can live their regular life pain-free. This is, of course, a very important aspect of injury rehab, but it should, for the sake of the patient, go quite a bit further.

Having somebody just recover enough following surgery to where they can live their daily life pain-free should only be the beginning of the rehab process. Following any surgical operation on the knee, the patient’s lack of knee stability will be worsened (1). This lack of knee stability can be a major cause in the recurrence of similar knee injuries, resulting in even more problems for the patient.

A phase following the rehab phase, often coined the “post-rehab” phase, is often overlooked in the overall long-term recovery of the knee. The focus of the forthcoming article will put on the importance of the phase following the rehab phase in terms of the rebuilding of stability, strength, and proprioception. The article will use examples of patellar fracture and ACL tears throughout the duration of the article. The procedure, however, will be similar to the procedures following other acute knee injuries that require surgery, including patellar dislocation, meniscus tears, etc.

The knee is one of the most commonly injured joint in the body among different sports (9). Knee injuries can range from chronic injuries, like bursitis or tendonitis to acute injuries, like anterior cruciate ligament (ACL) tears or patellar fractures. The patellar fracture is generally a contact injury following a blow to the knee, but it can sometimes be non-contact. The non-contact patellar fracture will generally happen during a landing on extended knees. The impact will cause the knee to overextend, often causing a tear to one or more of the ligaments surrounding the knee while also causing a fracture to the patella.

The four types of patellar fracture are:

The ACL connects the femur (thigh bone) to the tibia (shin bone); its two main purposes are to stop the tibia from traveling too far forward in relation to the femur and to resist rotation of the knee. ACL tears generally happen during a non-contact explosive pivot or turn where the knee either rotates too much or the tibia travels too far forward for the ACL to handle (5). The injury will either have a full or partial tear of the ligament.

Patellar fractures and ACL tears often require surgery. It has been estimated that there are up to 200,000 ACL reconstructions annually within the United States alone (10). Surgery will often require a grafting procedure to rebuild the patellar tendon and/or ACL.

The Range of Motion Rebuild

Following surgery, the primary purpose of the initial phases of rehab is to remove swelling, pain, etc. The initial phases’ purposes are to regain range of motion and to regain the person’s gait cycle to where they can walk pain- and compensation-free. These phases are generally supervised by a qualified physiotherapist/doctor, as the regain of knee flexion and an acceptable gait cycle is of utmost importance.

RELATED: Paying the Price of the Platform

This phase is not where the re-training should end, even though that is often the case. Many post-surgical patients reach the stage where they can walk pain-free, bend their knee pain-free, and if they’re lucky, have gotten to the stage where they can perform a bodyweight squat pain-free. This, however, is just the tip of the iceberg in adequately preparing one’s knee for the trials and tribulations of physical exercise again.

The Progression of the Bodyweight Squat

The three movements that will generally be used throughout this phase are respectively as follows:

This is the initial progression in rebuilding the squat. A bench will be set up with a number of plates stacked on top. The person’s pain-free controlled range of motion will dictate how many plates will be stacked up. The person will hold a plate out in front with their arms outstretched to help counterbalance themselves. From here, the person will squat down while keeping absolute control. Control is based on whether they are just touching the box or “plopping” on the box. The goal is always to be able to have enough control to where you can just tip yourself on the box. This progression is overloaded by taking plates away from the box. A person should aim to be able to perform 15 or more repetitions pain-free before the range of motion is increased. 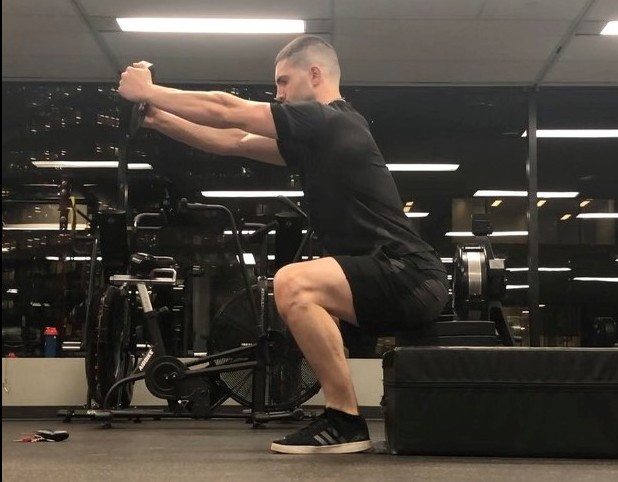 2. The Band Behind Knee Counterbalance Squat

Once the person is able to perform the counterbalance box squat to a ROM that has their thighs at or below parallel to the floor, the box should be removed. The next progression is the band behind knee counterbalance squat, where the person will stand 12 to 18 inches away from a squat rack or bench. From here, there will be a resistance band wrapped around the rack and around each knee. This band will aid in allowing the person to sit back more on their heels without losing their balance backward. It is important to note that during the post-surgical rehab, the age-old myth of “your knees shouldn’t go past your toes” is actually true to an extent. In the beginning phase, the person should reduce the amount of forward knee travel as much as possible, as this is a position that places far less pressure on the patella. The person during this progression should work toward being able to perform three sets of 12 or more reps pain-free with a full range of motion before progressing. 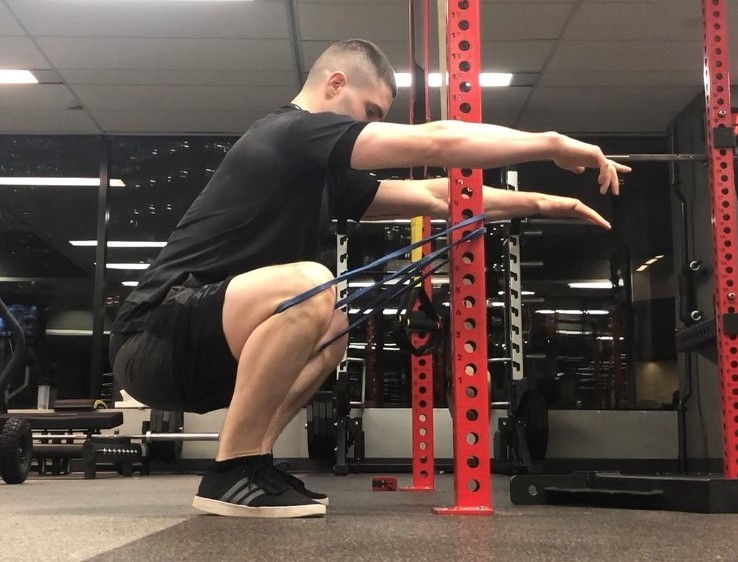 3. The Counter Balance and Bodyweight Squat

The last progression is the regular full ROM bodyweight squat. This, in the beginning, can be done with a counterbalancing aid in front (generally used as a light weight plate). From here, the person will just perform a squat until their thighs are at or below parallel to the ground. Once the client can perform 12 or more full ROM bodyweight squats pain-free, the focus will be placed on single-leg strength and stability, which will be discussed further in Part 2 of The Post-Surgical Knee series. 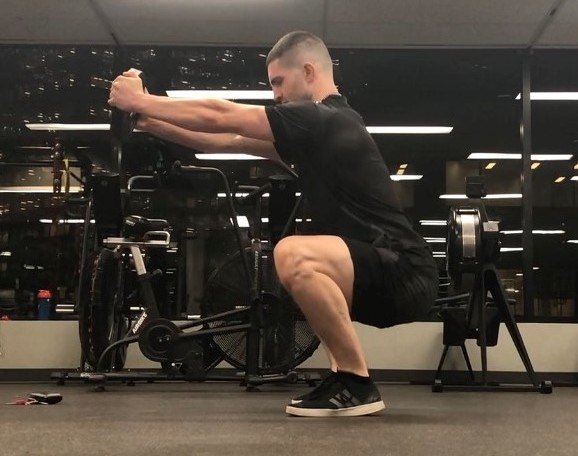 The Hip Hinge and the Re-Building of Posterior Chain Strength

Humans, due to evolutionary purposes (we have a natural extension of our pelvis and knee while our ancestors did not), have quads that are far stronger than that of our hamstrings. This is due to humans having to overcome larger knee flexion torques than hip flexion torques during walking, especially in comparison to our quadrupedal ancestors.

This evolutionary trait has lead to the human being far more susceptible to knee injuries. A lack of hamstring and overall hip extensor strength and coordination has been shown to have a correlation to knee injuries, especially in ACL tears and are more commonly seen in female athletes (3). The hamstring is a knee flexor, which means during sprinting and pivoting, the hamstring is responsible for preventing knee hyperextension. Having a weak posterior chain greatly increases the risk of knee injury due to its increased susceptibility to overextension and or rotation.

The progression of the Romanian Deadlift will begin with a kettlebell, and similarly to the squat, will begin by training it through a reduced range of motion. Reducing the range of motion is, once again, done by stacking up plates and removing them as the range becomes more comfortable, as pictured below. 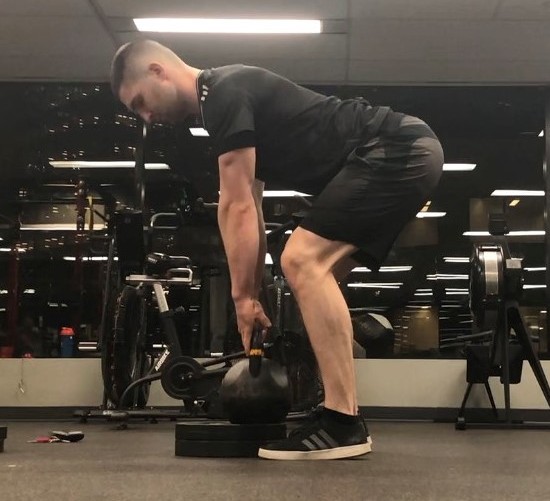 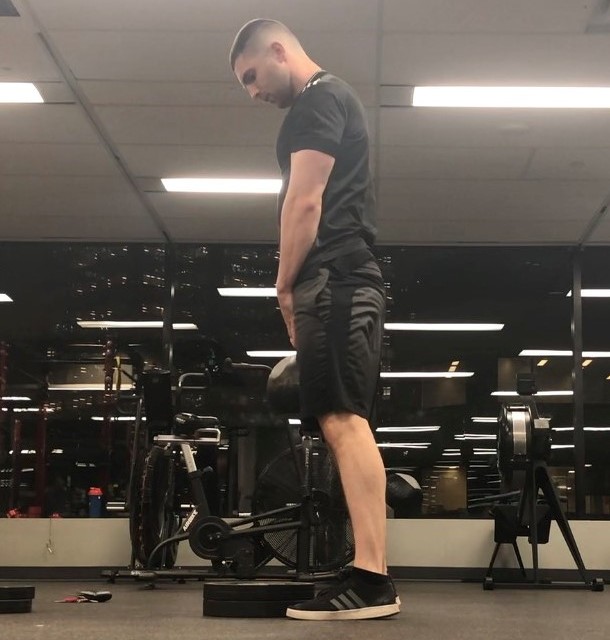 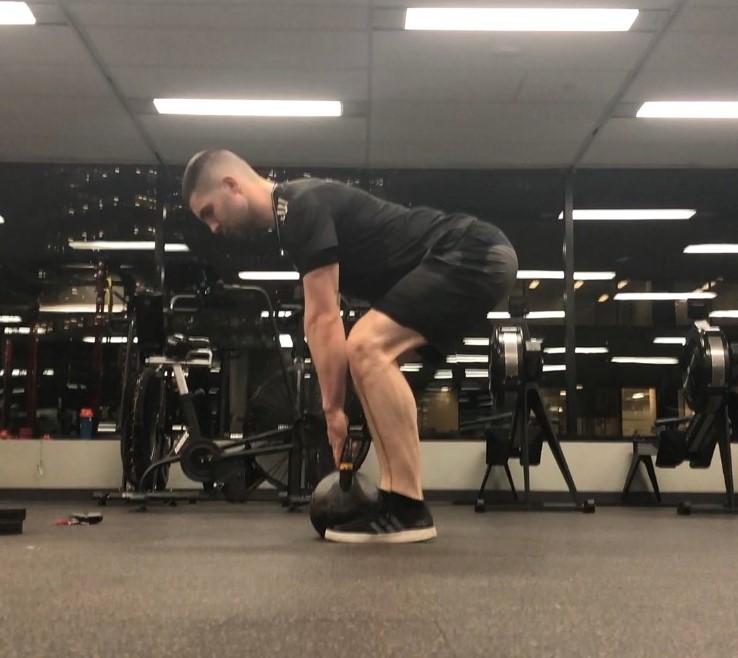 A special mention of the importance of posterior chain strength should be mentioned in regards to the procedure following a graft to rebuild the ACL or patellar tendon. The history of the surgical ACL repair has changed considerably since the procedures began in the early 1900s.

It is now very common that a graft will be taken from the semitendinosus (hamstring) tendon. This has been shown to have a longer yet more reliable recovery than the previously (mostly) used patellar tendon and quadriceps tendon. The primary drawback of using the semitendinosus tendon is that it will reduce the strength of the hamstring and therefore, the knee’s ability to absorb knee flexion torque during running (6). This is ironically one of the main initial reasons for someone’s susceptibility to an ACL tear.

Therefore, the re-strengthening of the hamstrings, the post-semitendinosus graft is of absolute utmost importance. The regaining of knee flexion strength (through hamstring curls, etc.) is generally done in the initial rehab phase and is overseen by a physio, which precedes where this series will come in.

Foam Rolling of the Surrounding Musculature

Throughout the ROM rebuilding phase and the eventual stability and proprioception rebuilding phase, the myofascial release (more correctly termed “self-assisted manual therapy”) of the hamstrings, quads, and adductors is a major part of the healing process.

The hamstring, even though it is weakened post-surgical operation, has also been shown to have flexion contractures, where the hamstring is unable to fully extend, restricting knee extension. The combination of being tight and weak can cause many problems in the future for the patient’s knee. The quadriceps (vastus lateralis and rectus femoris particularly) have also been shown to suffer neurological inhibition due to flexion contractures, inhibiting the quad’s ability to adequately extend the knee. Performing massage therapy in these areas has been shown to aid in the process of reducing these inhibitions alongside a physical therapy program (8).

A focus placed on the self-massage (or if possible, professionally performed massage) of the hamstrings, quads, and adductors (as the gracilis acts as a synergist in knee flexion and aids in knee stability) will aid greatly in the recovery from knee surgery and should be performed almost daily throughout the entire post-rehab phase (and depending on the word of the physiotherapist, the initial rehab phase, too). This will help to increase ROM and allow for far better intermuscular coordination, indirectly contributing to the improvement of knee stability and strength.

The general rehab phase following knee surgery puts a primary focus on the regaining of a pain-free gait cycle and the isolation of knee flexion and knee extension. Not always is it the case, but the supervised rehab phase will often finish before the regaining of ROM in the bodyweight squat and the rebuilding of strength and ROM in the hamstring through hip extension.

The slow rebuild of the bodyweight squat and hip extensor strength using progressions in movement and ROM will benefit the client greatly in terms of exercising pain-free, preventing further recurring knee injuries, and in the prevention of indirect chronic injuries up and down the anatomical chain due to the eventual compensation because of tightness, weakness, imbalance, etc.

The use of myofascial release will also greatly aid in the rehabbing of the ROM and will aid in the eventual rebuilding of stability, balance, and proprioception, which will be discussed further in Part 2 of the Post-Surgical Knee series.

Noel FitzGibbon is a former international underage-level weightlifter who has represented Ireland at the European level and has achieved a World Ranking with the IWF. He has coached in strength and conditioning and weightlifting/powerlifting at a provincial, national and international level. He is currently working as a personal trainer and a strength and conditioning coach out of Calgary, Canada.

A Practical Guide for Implementing Block Periodization for…