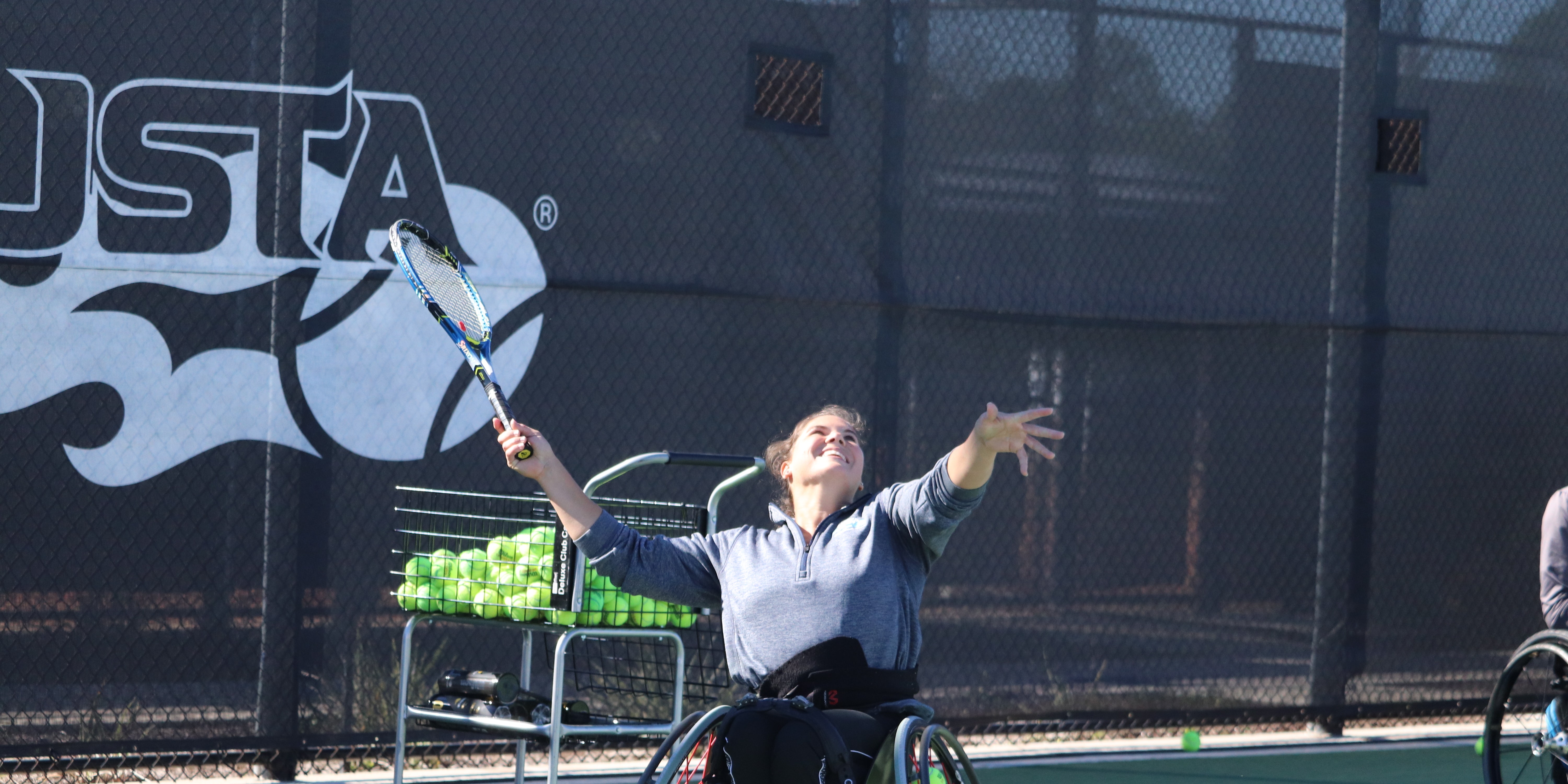 After winning Paralympic Gold at the 2016 Rio Games, Mackenzie Soldan considered the “elite athlete” chapter in her life to be officially closed. The then-24-year-old had finally attained her girlhood dream—winning women’s wheelchair basketball at the highest level in the world—and figured it was time to start building a more long-term professional career.

So Soldan did what many recent college grads do: She relocated to a new city (Dallas) and, with her newly earned master’s degree in marketing, landed a full-time job at an agency in early 2017.

But not long after, she got a call from Jason Harnett, national manager and head coach of Team USA Wheelchair Tennis. A member of the American women’s team couldn’t make it to the World Team Cup in Italy that April, Harnett informed her. Would Soldan be willing to take her spot?

Though Soldan, a standout tennis star in her youth, hadn’t played much competitively in years, she readily agreed. And that singular “yes” sparked a journey that led her to make history last year as the first-ever wheelchair athlete to live and train full-time in Player Development on the United States Tennis Association’s (USTA) National Campus in Orlando, Florida.

Now, with renewed Paralympic dreams, the 26-year-old athlete trains 15 hours a week in Orlando alongside some of the top tennis players in the world, marking an important step in her athletic career and in the sport of wheelchair tennis.

In the lead-up to her next big tournament—the 2019 World Team Cup, which kicks off in May in Israel—we chatted with the two-time Paralympian and her coach to learn more about her unlikely journey to become an elite athlete in two sports, her current training schedule, future goals with tennis, and what her presence at the USTA campus means for other athletes in the U.S.

First, a brief history on the sport of wheelchair tennis

Wheelchair tennis, as a formal sport, was founded in the late 1970s by Brad Parks, a young freestyle skiing prodigy who was paralyzed from the waist down in an on-slope accident, according to the International Tennis Hall of Fame. The sport Parks pioneered made its Paralympic debut in 1988, and 10 years after that, the United States Tennis Federation (UTSA), the country’s official governing body for tennis, absorbed wheelchair tennis. From 2002 to 2007, the four Grand Slam tournaments—the biggest tennis competitions in the world—started including wheelchair competitions. Since then, the sport has continued to grow. In fact, a 2016 article on the Paralympic website describes it as “one of the fastest growing wheelchair sports in the world.”

To play wheelchair tennis, athletes must have a permanent impairment to one or both of their legs. There are two divisions: open and quad. Players in the open division, including Soldan, have full functioning of both arms. Players in the quad division have an impairment in one or both arms. In general, wheelchair tennis players use the same racquets, balls, and court parameters as non-wheelchair players, and the rules are also the same with one exception: Wheelchair athletes are allowed two bounces on their side of the court.

In February, USTA announced that it is awarding $100,000 to 36 wheelchair tennis programs across the country to help the sport continue to expand, and Soldan’s presence in Orlando marks an important step in increasing the sport’s accessibility and visibility.

How Soldan got her start

When Soldan was less than a year old, doctors discovered a tumor growing inside her spinal cord. The surgery to remove it caused her to become paralyzed from the waist down. About six months later, at a post-op check-up, they discovered another spinal cord tumor, almost as big as the original one. Because it had developed so quickly, they assumed it to be cancerous and predicted Soldan had less than a year to live. Her parents prepared for the worst. Yet several months later, the tumor, inexplicably, had stopped growing, and surgery to remove it became a viable option. The operation was a success and to this day, Soldan has never had another growth.

“I consider that definitely a miracle,” Soldan tells SELF. Though she doesn’t remember the experience, it instilled in her a glass-half-full mentality. “I’m just really thankful for life,” she says.

From there, Soldan began playing tennis age a young age—around 5 or 6—simply because her family loved the sport. At the time, she lived in Hemlock, Michigan and in addition to regular court sessions with her parents, Dave and Jannine Soldan, and sister, Kirsten, she started taking tennis lessons at a local tennis center. At age 10, her family moved to Louisville, Kentucky and she continued with the lessons on about a weekly basis, occasionally entering tournaments. Around age 12, she competed in her first-ever wheelchair tournament and was quickly hooked.

“I think because I’m so competitive, it was just kind of a natural thing for me to keep going with it,” says Soldan. “Before that I wasn’t really exposed to that, I was just around other kids my age that were not in wheelchairs playing tennis.” At age 15, she made the Junior USA Team in wheelchair tennis and started traveling all around the world—from Sweden to South Korea to Turkey—for World Team Cup competitions.

But, interestingly, it’s basketball that Soldan actually describes as her “first passion.” At age 7, Soldan started playing wheelchair basketball, and after graduating high school, Soldan enrolled at the University of Alabama on a wheelchair basketball scholarship. Throughout this period, Soldan practiced tennis here and there, entering the occasional tournament, but basketball was her main priority.

Then, in 2011, Soldan turned back to tennis for a brief, though incredibly impressive stint when she attended the Parapan American Games in Mexico as a last-minute alternate. She ended up winning gold in both the singles and doubles competitions, which automatically qualified her to play on the USA’s wheelchair tennis team at the 2012 Paralympic Games in London. After the London Paralympics, Soldan turned her focus back to basketball, and those efforts led her to make the women’s national wheelchair basketball team in 2013, which she continued playing on through the 2016 Paralympic Games.

That unexpected 2017 World Team Cup experience in Italy, where Soldan and her teammates won bronze, “really lit the fire again for me to…jump back into tennis and find a way that I could make it happen,” she says. So with Harnett’s encouragement, she quit her job in Dallas, moved to Orlando, and in April 2018, became the first-ever wheelchair player to train full-time at the USTA National Campus.

“I just wanted to see if I put everything into it, how good could I get?” says Soldan of why she ultimately said yes to the Orlando offer.

Soldan says wheelchair tennis has noticeably changed in the past 10 years as players have developed stronger, more powerful racquet skills. That’s why she’s working on developing a more “aggressive game style.” Right now, she trains about three hours a day, five days a week alongside other USTA athletes. Those three-hour sessions include about two hours on the court practicing various skills and drills, plus one hour at the gym doing a specialized strength and conditioning workout that isolates many of the smaller upper-body muscles used in tennis. Then, because some of Soldan’s competitors in the open division have full trunk strength, and she doesn’t due to the nature of her spinal cord injury, she focuses on strengthening her pushing skills.

In comparing Soldan to other athletes, Harnett calls out her natural aptitude for tracking a ball and her overall coordination, which is “just a notch above a lot of athletes,” he tells SELF. On top of that, she has strong chair mobility skills, thanks to her years playing the fact-paced team sport of basketball. In fact, he believes Soldan’s background in basketball allowed her to return to competitive tennis so quickly, despite taking years off from the sport. Then, there’s her exceptional vision on the court, says Harnett, which allows her to anticipate plays and proactively move accordingly, rather than just react.

Lastly, “her work ethic is second to none,” he says. “I don’t think we have any athletes that will outwork her. When she comes to work, she is pretty much all business.”

In thinking about her short-term goals, Soldan hopes to qualify for the 2020 Paralympics in Tokyo. Longer term, she can see herself giving back to wheelchair sports—whether that be wheelchair tennis, basketball, or wheelchair sports in general—in some capacity, perhaps by using her marketing degree. She’s already getting a taste of what it’s like to pay it forward through weekly coaching sessions with athletes attending junior camps and wheelchair clinics at the Orlando campus, an experience she’s really enjoyed for the perspective shift.

“When you’re an athlete, you really focus on yourself,” says Soldan. “As I got older, I realized, you know, it’s not always going to be about me.”

“We owe her big because she’s really propelled our program forward,” says Harnett.

Soldan describes practicing occasionally with the non-wheelchair USTA payers: “We’ve gotten them to try sitting in a wheelchair a couple of times, playing tennis, and they were pretty bad,” she laughs. “It was a fun experience and that’s really big for us to be able to show […] some of the future big stars of U.S. tennis that wheelchair tennis is legit.”