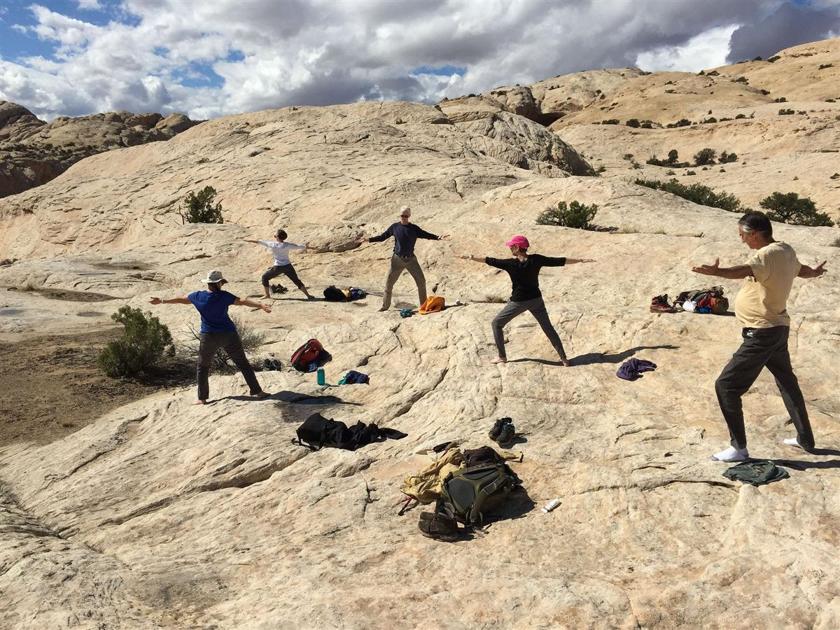 Most travelers incorporate special interests into their trips. Some even make it the focus of the vacation. Golfers check off prestigious courses. New York City visitors come for the Broadway shows. For history buffs, Civil War battlegrounds attract a large following. I have an older friend who will go out of the way to see bridges he’s interested in. And one of my regular traveling buddies always insists on massages regardless of the country, which experiences deserves its own column.

I’m a yoga aficionado and seek out notices on coffee shop bulletin boards for local yoga workouts. In Cancun for a family destination wedding, I joined early risers at a beach kiosk to greet the sun with yoga morning salutations. The leader was an energetic young man who added jumps from floor to standing for many of the positions, a choice I soon avoided. But I enjoyed seeing the upside-down beach and ocean from a downward dog position after being sure no other participant was behind me.

I’ve shown off my warrior stance in a yurt in New Mexico, the large common space on an Emirates Airbus A380 to Dubai, and the Siddhayatan Retreat in Windom. But my favorite yoga experience was “Yoga in the Wild” offered by “In the Wild” tours near Arches and Capitol Reef Nationals Parks in Utah. It included much than yoga.

The tour popped up in my search for interesting outings in northern Utah. Photos of a side plank (with one arm supporting the body and the other arm in the air) at the edge of a cliff with a beautiful view was enticing to me but not my height averse husband. After a phone conference with the owners, we were assured the yoga locations could be adjusted according to the participants’ “comfort level.”

At mid-morning on a cloudy October day, we met Christopher and Melissa Hagedon, a perfectly suited adventure tour couple. Christopher knows his geology and Melissa her botany. We were in the San Rafael Swell that is managed by the Bureau of Land Management and was designated a federal wilderness in March 2019. Registered guides are required to seek spaces where it is unlikely to encounter another tour. This was especially appealing after the crowds at Arches and Canyonland National Parks.

Before we could throw out our yoga mats, Christopher and Melissa had something to show us. We hiked the rocky hill in front of us, without benefit of a trail — over large boulders, down sandy embankments, quickly moving through a marsh area that had a quicksand suction in the middle. The week before a Boy Scout on the tour got stuck in the sand, requiring the use of a rope to pull him out. All I could think of was the old Tarzan movies when a character slowly disappeared as the quicksand sucked him downward to the horror of the TV viewers, including me.

Our destinations were two caves, a large and a small one, with wide open-air openings. Native Americans had long discovered both. Their 700- to 4,000-year-old pictographs of elongated stick figures and animal outlines adorned both caves. One cave had an ocular opening, meaning a round break through the stone to the sky. It felt like an eye into the universe above. Christopher assured us we were one of very few hikers to ever see these paintings as they are not on a map and access to the land is limited. He discovered the caves without help and had never seen other hikers in the area. I understood why native Americans spent time in the caves — isolated, safe, comfortable, nearby water source. We had lunch with their spirits.

Coming out on an outcropping of rock, Melissa announced it was time for yoga. Despite the hard and uneven surface, the view across Robbers Roost, a hideout destination for criminals on horseback, was wide and deep. In the distance, the snow-covered Henry Mountains held their own secrets. Above, clouds moved with the wind as cliff swallows rode the currents.

The workout was not intense. Melissa may have worried about our stamina and balance, especially on the rocks. But it was enough that the time spent at the end in the dead man’s pose was deeply relaxing. My mind tried to return to all that I needed to do back in Paris, but a bird sound or breeze brought me back to the present moment. Yoga was made for those moments.

Mary Walker Clark is a retired attorney turned travel writer. Her stories may be found at her blog, Mary Clark, Traveler and her podcasts at KETR, 88.9. She lives in Paris and may be contacted at [email protected].

9 Smart Tips for Taking a Mental Health Day That Actually…

What is Trauma Sensitive Yoga? Here’s what taking a…