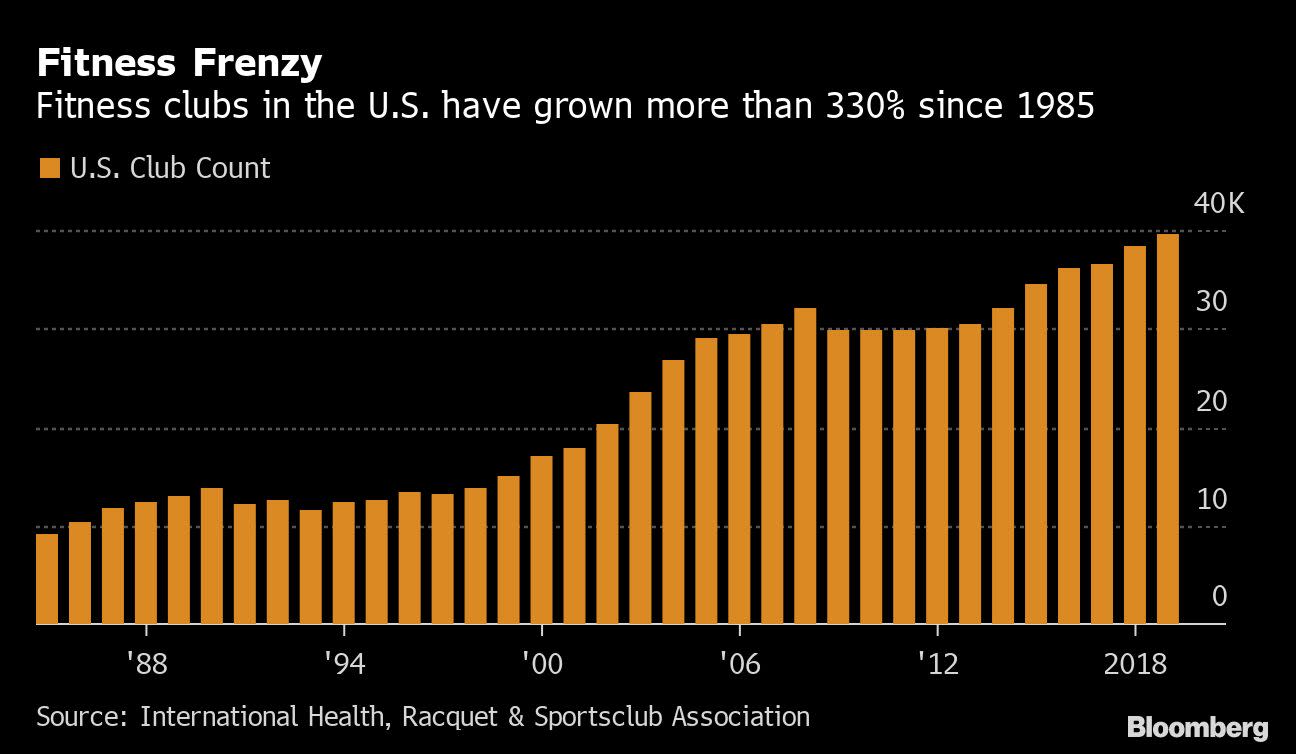 (Bloomberg) — It’s midday, mid-January at a New York Sports Club in Manhattan. Weights are clanking. Classic rock is pumping. Sweat is sprouting. A steady stream of customers files in and out.

Despite the buzz of the busiest time of year, debt problems are bedeviling the fitness business, especially middle-market gym chains such as parent company Town Sports International Holdings Inc. and its peer, 24 Hour Fitness Worldwide Inc.

Gyms have benefited from economic expansion. More Americans than ever have memberships. But popularity aside, middle-tier operators “don’t have the same price advantage of a low-cost gym or the competitive advantage of a boutique fitness option,” said Emile Courtney of S&P Global Ratings.

They’re up against luxury operators like Equinox Holdings Inc., with its eucalyptus-scented towels and debt that trades at 100 cents on the dollar. By contrast, Town Sports and 24 Hour struggle with customer turnover and their loans are sold at discounts of more than 20%.

“Personalization and tribalism are fueling the boutique demand, especially among millennials,” said Meredith Poppler of the trade group International Health, Racquet & Sportsclub Association. “Most people want to be with ‘their people,’ the people like them who have the same passions. Boutiques deliver on that.”

Town Sports, with 600,000 members, has a $194 million loan due in November. Before its proposal earlier this month to buy Flywheel Sports Inc., an indoor cycling club with 300,000 members, Town Sports hadn’t outlined a plan to repay it, according to Margaret Taylor of Moody’s Investors Service.

But the company can delay the loan’s maturity four years if it completes the acquisition. Kennedy Lewis Investment Management, the current Flywheel owner, would also bring $50 million to the transaction.

The plan, however, is conditioned on the support of existing debt holders. Without their consent, the deal could fall apart and the company would be left with the loan’s November maturity.

Ideally, adding Flywheel would give Town Sports the chance to boost revenue by selling members more expensive packages, according to S&P. Even so, the debt taken on to buy Flywheel would probably mean more financial strain on Town Sports, S&P said.

The Town Sports loan coming due this year is trading at about 76.5 cents on the dollar, according to data compiled by Bloomberg. Shares of the company, which hit $14.75 in July 2018, now go for less than $3.

The Flywheel acquisition is also an effort to sweeten Town Sports’s appeal to boutique customers like 29-year-old Alexandra Antonacci-Bolanos. The medical-device executive from West Islip, New York, said she doesn’t mind paying more for fitness because it lifts her spirits. On top of $70 a month for a gym membership, she said she spends about $36 a class for SoulCycle — a company under the same corporate umbrella as Equinox — which is often described as a cardio dance party.

Closely held 24 Hour Fitness, with more than 440 clubs, carries too much debt for what it earns, according to Taylor of Moody’s. The company reported a slide in earnings last year partly due to the rocky debut of an automated system for checking in and signing up customers. Its membership declined to 3.4 million at the end of the third quarter from 3.5 million in the previous quarter, according to Moody’s. Its average monthly attrition rate rose to 4.1% compared with 3.9% in the third quarter of last year.

Cancellations are killers for gyms. It costs twice as much to recruit a new member as it does to retain an existing one. Roughly 28 of 100 U.S. gym members are expected to bail this year, according to the trade group.

24 Hour Fitness’s more than $800 million term loan is trading at around 78 cents on the dollar, according to Bloomberg pricing data.

“We see a tremendous opportunity in the mid-tier that hasn’t yet been realized,” Tony Ueber, 24 Hour Fitness’s chief executive officer, said in a statement to Bloomberg. “As a result, we are in the process of transforming our business model and making the necessary investments to firmly establish a leadership position in the industry.”

Meanwhile, shares of Planet Fitness Inc., with its $10 monthly fees and promise of “judgment-free zones,” have gained about 36% in the past year.

Though S&P said last week it downgraded Equinox to B-, non-investment-grade territory, because its increased expenses make the company more vulnerable to an economic downturn or “an inadvertent operating misstep,” the credit-rating company also lauded Equinox’s “strong brand awareness among consumers” and customer loyalty that set it apart from competitors.

Closely held Equinox said it planned to open 10 new clubs this year. It declined to comment on its financial position.

Jonathan Germer, a 29-year-old teacher from Sayville, New York, said he’s involved in different approaches to fitness, including Crossfit Inc. He said he likes the sense of community of Peloton Interactive Inc., even though he shares no physical space with others.

Germer said he spent just under $2,000 for a Peloton stationary bike and pays $40 a month for a digital membership that allows him to join streaming classes at home.

To contact the reporter on this story: Katherine Doherty in New York at [email protected]

To contact the editors responsible for this story: Rick Green at [email protected], Bob Ivry

bloomberg.com” data-reactid=”77″>For more articles like this, please visit us at bloomberg.com

Law enforcement fitness standards in the spotlight as…

How a Visit to a Childhood Home Spurred a Meditation on…

How to Get Rid of Gas Pain

Doctor-led United Medical Fitness gym seeks to carve its own…