The Real-Life Diet of NASCAR’s Chase Elliott, Who Loses 10 Pounds at Every Race 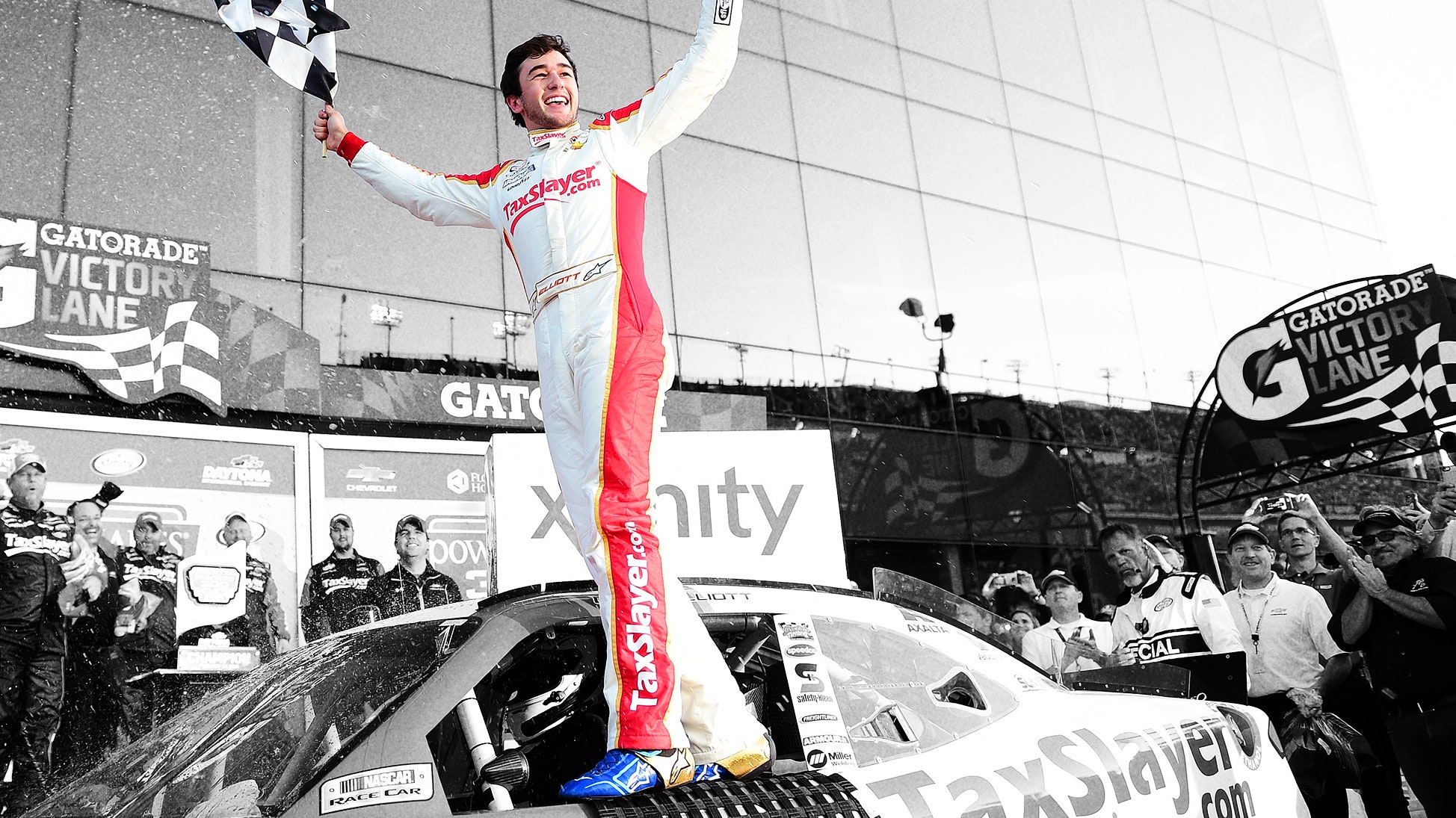 No, drivers do not just “sit there.” Here’s how one of the sport’s most successful athletes stays in peak racing form.

Chase Elliott doesn’t turn 23 until November, but after ten years as pro—when your dad is NASCAR legend Bill Elliott, it’s hard not to start early—the man has learned a ton about staying in the best shape he can. And racing does require being in shape—temperatures inside the car can reach 140°F, and driving for hundreds of laps at hundreds of miles per hour has a way of turning neck and shoulder into shredded beef. (It is not uncommon for him to lose 10 pounds during a single race.) We caught up with him after a recent practice run to learn more about the tricks he uses to stay hydrated; what to eat on the morning of a race; and the perils of allowing yourself to eat one more chip.

GQ: How do you prepare before a race?
Chase Elliott: The biggest key for me is hydration. If you fall behind and the race begins, it’s too late. But it also depends on what kind of race you’re coming off of. If you’re coming off a really hot race, you want to spend your week trying to catch up before the next one. You need at least three or four days after a hot one. If I get dehydrated, it’s my calves that cramp up first.

What kind of shape do racing athletes have to be in?
It’s not about benching or squatting the most, so if you lift, it’s about endurance—a low-weight, high-rep regimen. You work your upper body pretty hard during a race, especially from your shoulders to your neck. I never really know how to describe it, but there are certain muscles that we use that you just don’t use if you’re doing anything else. When I was younger and just starting to race, I had never worked these groups of muscles before. If you take a few weeks off and then run a race, you’ll be sore.

How do the demands of racing affect your diet?
I’m not going to act like I’m some health freak and do everything perfectly, because I certainly don’t. I try to do the easy things, like avoiding soft drinks—I drink a lot of water instead. Another one for me is not eating a lot of bread. If you have a sandwich, it’s just like, “Why?” It doesn’t really do you any good, especially late at night. I’m pretty big into salads, too.

I certainly love going and eating bad every now and again, just like everyone else, because you have to live a little. You just try and balance it out.

Tell me about eating bad.
I’m a sucker for Mexican food. With the entrées, you can actually eat pretty well if you get fajitas and skip the quesadillas and the tortillas. But the chips and dips are what get me. I always tell myself, “This is the last chip.” It never is.

You’re a pilot and fly yourself to and from most of your races. Are there any similarities up there to what you do on the track?
To me, the decision-making process is similar. A lot of times, whether you’re flying or driving, if you don’t make a decision and stick with it, you’re second-guessing yourself, which can really get you in trouble. There’s no one in the car with me when I’m racing, so ultimately, I have to weigh the pros and cons and then make the final decision about what I’m going to do. Things are a little more aggressive on the track than in the air, though.

Are you loading up on race day or keeping things light?
Typically, I eat a grapefruit and a banana in the morning. Before the race, I’m pretty strict on a grilled-chicken-type lunch with rice and corn. I don’t like to eat a ton because I don’t want to feel full going into a race.

I’m ready to eat once we get done, though. Right afterwards, I go back to leftovers. Typically, I have a wrap made that basically has everything I ate from lunch. I’ll just have it again but double down on the chicken and rice.

Brian Vickers on Keeping Your Cool at 190 MPH

How do you stay hydrated during a race?
I have a product I use from Shaklee—it’s a hydration mix, and I have a little box that sits under my seat. On a hot day, I run out of that fast. I’ll have bottles of water given to me on pit stops, and I’ll try to mix the hydration powder with the regular water. That water is typically colder than what’s been sitting under my seat, so it’s nice to have some variety.

Another thing that I’ve started doing is taking salt tablets and salt pills throughout the race. I typically take one or two before the race, and then as we go, if I feel like I’m sweating a lot, I’ll take one or two more to keep from cramping up.

Do you stretch?
I’ve done a poor job at that over the years. I’ve always been kind of stiff, but after ten years of racing professionally, it’s gotten a lot worse. In this sport—sitting in the cars and doing the motions we do—we get really tense, and my mobility has suffered because of that. It’s a weird dynamic, to have your muscles cramping and your heart racing while your body isn’t moving. I’m not sure your body is supposed to work like that.

This interview has been edited and condensed.

Gwyneth Paltrow Shared What She Eats in a Typical Day—And…