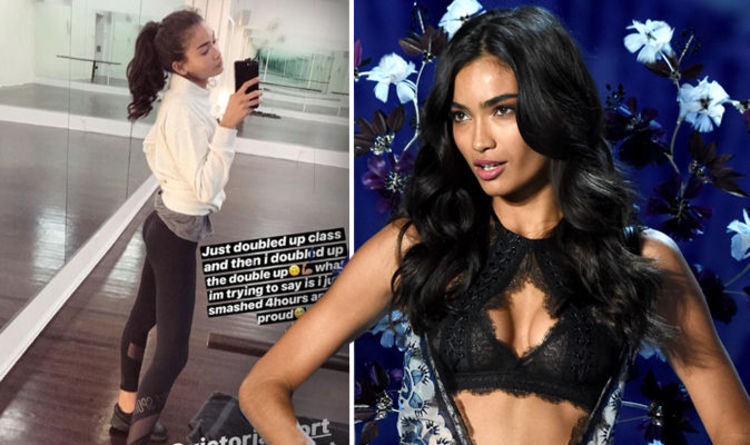 Victoria’s Secret Fashion Show is the most-watched fashion show in the world.

The show sees the world’s most beautiful models take to the runway to show off the lingerie giant’s wares.

Ahead of the show next month, the models have no doubt been hitting the gym hard and watching what they eat.

But one model has taken it to the extreme, shocking fans with her gruelling four-hour workouts.

In an effort to look her best for the upcoming show, Victoria’s Secret model Kelly Gale, 23, has been raising eyebrows with her regime.

The model posted her workout to Instagram this week, gaining lots of attention from users.

Kelly posted a mirror selfie to her 819,000 followers, showing her slender frame following a workout.

She captioned the image: “Just doubled up class and then I doubled up the double up. What I’m trying to say is I just smashed four hours and I’m proud.”

The model has been walking in the Victoria’s Secret Fashion Show since she was 18, five years ago.

Last year she revealed her intense training regime for the 2017 Fashion Show, held in Shanghai.

Talking to Vogue magazine, the 23-year-old revealed: “On each day leading up to the [Victoria’s Secret] show, I did about four to five hours of walking.

“I also do one to two hours of intense workout sessions, 90-minute massages and sometimes 45-minute infrared sauna sessions.”

She has previously discussed how she walks 30km a day and does boxing, skipping, running, resistance training and pilates.

Speaking to The Project, Robyn said: “I’m sick of seeing Victoria’s Secret have the same body type every year, we need diversity.”

She has been vocal in her commending of the lingerie brand, revealing to The Daily Telegraph this month: “I’ve felt like s**t every year looking at that show. I shouldn’t have to feel that way.

“Where’s the inclusivity? Where’s the diversity? The perfection is ­intense. I want actual cellulite on a catwalk, I want girls to be relatable.”

Aside from gruelling workouts, the Victoria’s Secret Angels have other methods to get in top shape before the show.

The beautiful model’s diet plan has now been revealed, with the foods the models eat all listed.

Will US Cardinals Go Vegan for Lent? – PETA

UK Employers Now Have a Guide to Help Them Not Discriminate…