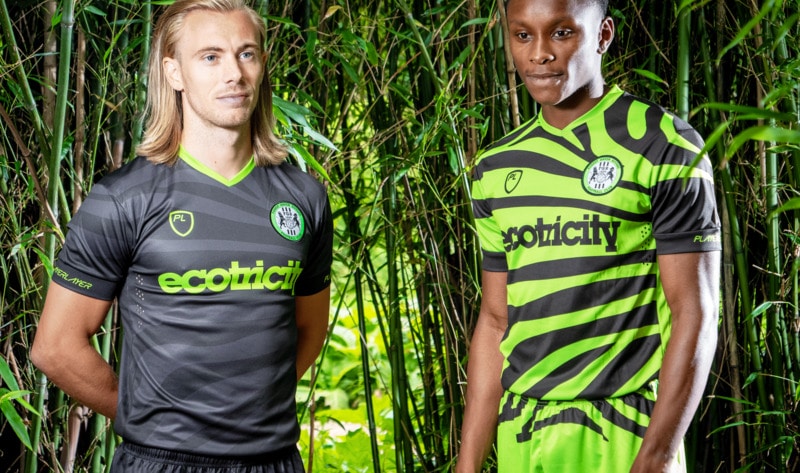 For the next two seasons, United Kingdom’s vegan soccer club Forest Green Rovers will wear new vegan uniforms made by sports clothing brand PlayLayer from 50-percent bamboo—highly reducing the amount of plastic typically used in uniforms. The design of the new uniforms was inspired by the camouflage pattern of the zebra and features a logo from its charity partner, ocean conservation organization Sea Shepherd, on the back of the jersey, and the logo of its milk partner, vegan brand Oatly, on the back of the shorts. “We’ve taken inspiration from nature with our new kit—from the zebra stripes to the sustainable materials. I was pretty shocked when I found out that modern sportswear is actually made from plastic, that feels wrong to me, not just from the sustainability point of view, but for performance, too,” Forest Green Rovers Chairman Dale Vince said. “Together with PlayerLayer, we’re making strides towards a new approach for football kit—this year’s 50 percent bamboo is a stake in the ground (no pun intended), we plan to move beyond that. The aim is 100-percent sustainable high-performance material.” Vince—who is also the CEO of vegan electricity company Ecotricity—purchased the club in 2011 and began renovations to create the most sustainable team and stadium in the world by installing an entirely organic field, 180 rooftop solar panels that provide 10 percent of the stadium’s electricity, and a robotic lawn mower that services the field in an energy-efficient manner. In 2015, the club removed all animal products to become the world’s first vegan stadium and serves vegan food such as Quorn meat alternatives, pizzas, and burgers. In 2017, the carbon-neutral club, was awarded league status which is reflected on its new uniforms as one filled in star of three grey stars—which symbolize the remaining steps needed for Forest Green Rovers to reach the UK Championship division, the highest in English soccer. The team will launch a third uniform next month in tribute to Sea Shepard and as part of a fundraising initiative for the vegan organization. “We are privileged to work with such a forward-thinking, creative, and rebellious football club,” PlayerLayer Founder Roderick Bradley said. “We are developing some completely natural fabrics which will change the sports clothing industry forever.”