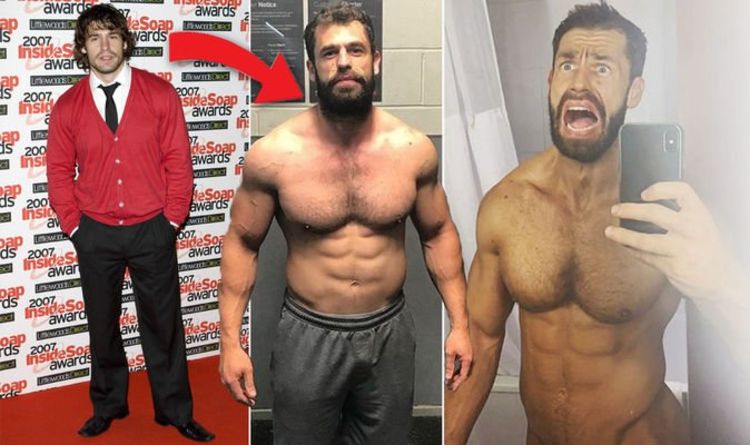 Kelvin Fletcher, 35, has swapped the rolling hills of Emmerdale for the shiny dancefloor of Strictly Come Dancing, and the actor is hotly tipped to win the dance competition this year. Many who compete on the show find they lose weight thanks to the intense daily dance practice – but Kelvin was no stranger to exercise before he joined Strictly, and is in great shape. As well as posting details of his workout to Instagram, he also stripped down for ITV show The Full Monty back in 2018. On his social media accounts, the former Emmerdale star has uploaded videos of himself completing intense workouts.

Under one recent workout photo, one fan commented: “If you’ve got it flaunt it, and you definitely have it.”

“What a lovely body!” another praised.

In a string of videos, Kelvin gave a description of workouts he was doing at different sessions with his personal trainer.

In another post, Kelvin filmed himself doing another routine and let fans know what he was doing.

He wrote: “Session two workout is more strength-focused and mainly composed of compound lifts in contrast to my hypotrophy days.

“I’m working at around 75 to 85 per cent on these days and although I have no specific rep number I have to hit on paper, I do have a specific rep target I’m aiming for on the first set of each exercise.

Kelvin is not the only Strictly Come Dancing contestant to overhaul their fitness in recent years.

Catherine Tyldesley lost a whopping five stone – how did she do it?

The actress has revealed her entire meal plan previously.

She told the Sun: “I think it’s about creating a lifestyle.

“If you want to sustain a healthy weight and feel good about yourself then you need to fuel your body with the right food.”

Adele’s Trainer Revealed The Diet Behind Her Weight…

Why ‘Buddha Bowl’ Is A One Bowl Of Wonderful Health!

Foods for vaginal health: How can diet help? – Medical…