In the weeks following President Donald Trump’s announcement that drug companies were about to make ‘massive’ cuts to the costs of their drugs, many medications actually got more expensive, a new Associated Press report shows.

Rising drug prices are costing millions of Americans their health and even their lives.

President Trump campaigned on promises to check the practices of pharmaceutical companies he claimed were ‘getting away with murder.’

In May, he announced that the drug companies were about to slash prices on medications in the coming weeks. At first, nothing changed, but some of the biggest drugmakers soon promised that they would in fact lower prices, and soon.

Nevertheless, the AP found that the prices of more than 4,000 name brand drugs went up in June and July, while there were only 46 cost-reductions in the same period. 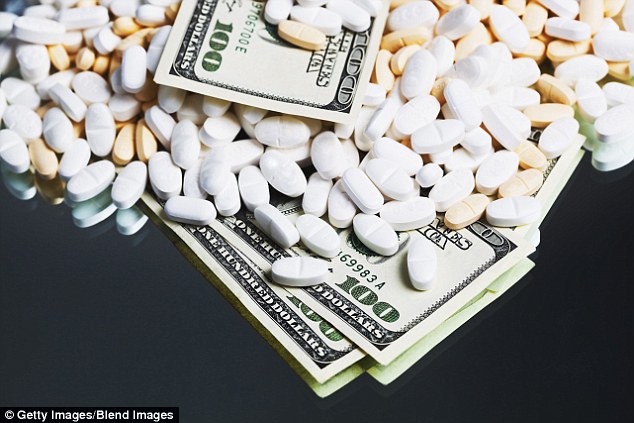 Despite Trump’s declaration that drug companies were about to lower their prohibitive prices in May, most medications actually got more expensive in the following months, a report found 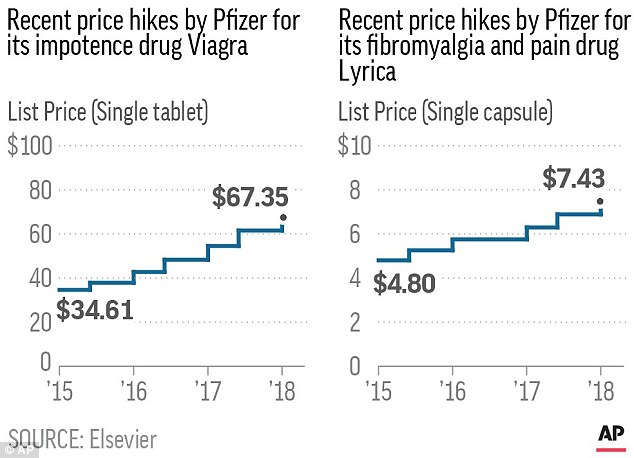 Despite Trump’s declaration that drug companies were about to lower their prohibitive prices in May, most medications, including the popular Pfizer pills Viagra and Lyrica (pictured) actually got more expensive in the following months, a new AP report found

Drug prices in the US are an anomaly.

Depending on the drug, an American may pay anywhere from two to six times more for their prescription than they would if they lived in any other developed country in the world.

As compared to the UK, for example, the top 20 blockbuster medications are three times more expensive in the US on average, a Reuters investigation found.

President Trump all but declared Big Pharma his sworn enemy during the 2016 election season and promised to see that the then $333 billion industry was reined in for the benefit of ailing Americans.

Yet in the summer of 2017, one in four Americans still reported that they were paying more out of pocket than they had been in 2016, according to a Consumer Reports survey.

And one in seven simply didn’t fill their prescriptions because they couldn’t afford to.

So when Trump announced his ‘sweeping’ plan to lower drug prices in May 2018, it was beyond welcome news to Americans.

The President’s plan was to increase competition and cut out the ‘middle men’ (he added: ‘whoever they were’). As he spoke, stock prices for major pharmacies and health insurance companies, like CVS and UnitedHealthcare plunged.

But the price that Americans pay for their medications has not followed suit.

In the two months after Trump’s announcement, there were more than 16 price hikes for every decrease, the AP found. Over the first seven months of the year, there were 96 price increases for every cut.

Health and Human Services Secretary (HHS) Alex Azar, the administration’s point person for efforts to lower drug prices, conceded in a recent AP interview that it will be a while before drug prices fall.

He noted the complexity of the medicine market and its incentives for drug makers to boost prices so they and middlemen make bigger profits.

‘I am not counting on the altruism of pharma companies lowering their prices,’ said Azar, who was a senior executive in Eli Lilly’s US business for a decade when it dramatically raised prices for its insulin products.

The AP analyzed 26,176 US list price changes for brand-name prescription drugs from January 1 through July 31 in the years 2015 through 2018, using data supplied by health information analytics firm Elsevier.

The AP focused its analysis on the first seven months of each year because of the seasonality of price changes and to make meaningful year-to-year comparisons.

The data included more than 97 percent of price changes during those periods and, for many drugs, several dosages and drugs forms, such as pills, liquids and injectable drugs. (In the three percent of cases not analyzed, the AP couldn’t determine how the new price compared with the previous one or whether it was for a product new on the market.)

There were fewer price increases this year from January through July than in comparable prior-year periods, but companies still hiked prices far more often than they cut them. This year through the end of July, there were 4,412 brand-name drug price increases and 46 price cuts, a ratio of 96-to-1. 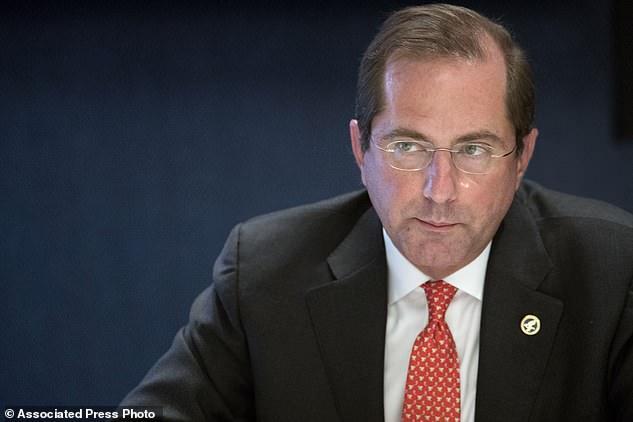 Health & Human Services Secretary Alex Azar conceded in a recent AP interview (pictured) that it will be a while before drug prices fall. (AP Photo/Mary Altaffer)

In June and July, right after Trump’s price cut prediction, there were 395 price increases and 24 decreases. The two dozen cuts were up from the 15 decreases in those same two months last year, but increases still outpaced decreases by a ratio of 16.5-to-1.

The median price increase, meaning half were higher and half lower, was 5.2 percent in June and July of 2018, down from eight percent in that period in 2017.

The median price cut this June and July was 11 percent, much smaller than in comparable periods in prior years.

The AP also asked 24 large drug companies this summer if they planned to cut drug prices. None said they did, though some didn’t answer.

‘We have a broken pricing system,’ he said.

In the US, drug pricing is far from transparent. Manufacturers typically set high list prices but then negotiate rebates and discounts with middlemen, such as prescription benefit managers, to get preferential insurance coverage for their products.

Many consumers never see the list price, though rising drug prices generally put pressure on insurers to raise rates. Patients with high-deductible or no insurance often get stuck being charged the full list price.

‘It’s everyone saying, “This has got to stop,”’ Morgan said.

Those include hikes for EpiPen emergency allergy shots and the actions of disgraced former pharma executive Martin Shkreli, who hiked the price of an old infection treatment from $13.50 to $750 per pill overnight.

‘The rate of increases has slowed down, but prices haven’t decreased,’ said Stephen Schondelmeyer, a University of Minnesota professor of pharmaceutical economics who runs its research program on drug prices and public policy.

He noted such temporary pricing restraint occurs periodically, around elections and other times when the issue is hot, but then companies go back to raising drug prices.

Pfizer, the biggest US drugmaker, angered Trump by raising prices on July 1 for 40 medicines and vaccines, totaling more than 100 products, with some increases hitting 9 percent. Pfizer had already hiked list prices in January for all but two of those medicines, most by 9 percent to 9.5 percent, according to Elsevier’s data.

‘Pfizer & others should be ashamed that they have raised drug prices for no reason. … We will respond!’ Trump tweeted . After a call with Trump, Pfizer executives reversed those price hikes until January at the latest.

Seven other major drugmakers, perhaps hoping to avoid their own Twitter spanking by Trump, have since said they wouldn’t increase prices for the rest of the year. All of them had already taken price hikes on many of their products in January.

Meanwhile, 77 percent of Americans consider US prescription drug costs ‘unreasonable’ and fewer than a quarter approve of how Trump is addressing the problem, according to a mid-August national poll of 1,002 adults from West Health Institute, a nonpartisan healthcare research group.

Experts don’t expect drugmakers to slash prices soon, if ever.

Trump’s ‘blueprint’ for reducing drug prices, released on May 10, has no provisions for reducing prices of the costliest new brand-name drugs, which won’t face competition for years, Bach said.

Dr Stephen Schondelmeyer, a professor of pharmaceutical economics at the University of Minnesota predicts drugmakers ‘will wait to see if this blueprint is going to do anything.’ If it doesn’t bring substantive policy changes, they won’t alter their pricing strategy, he said.