An outbreak of flea-borne typhus has hit downtown LA, the county department of public health has confirmed.

At least a dozen cases of the disease, which spreads from fleas to humans, have appeared in a residential neighbourhood of the California city, according to health officials.

All of the sufferers live or work in the area, with some being homeless, they added.

Flea-borne typhus occurs when faeces from an infected insect come into contact with a person’s cut or gets rubbed into their eyes.

These fleas often live on feral cats and rats who are attracted to areas with trash on the streets.

Most sufferers endure headache, fever and rash, however, in severe cases, typhus can lead to life-threatening hepatitis and internal bleeding. 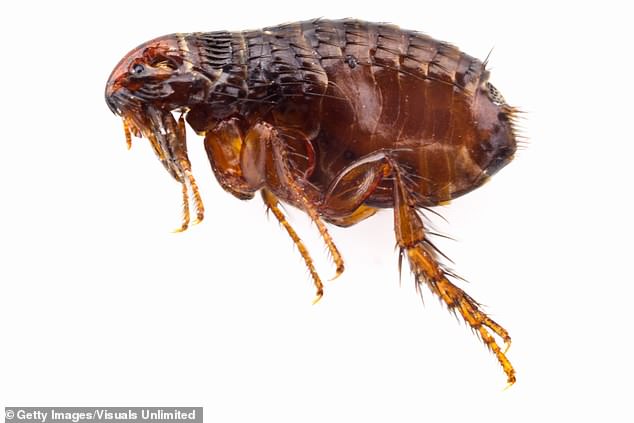 WHAT IS FLEA-BORNE TYPHUS?

In severe cases, patients can require hospitalisation due to hepatitis or internal bleeding.

It is caused by the bacteria Rickettsia typhi and possibly Rickettsia felis, which are carried by fleas.

The fleas live on animals, particularly feral and stray cats, rats and opossums, but do not make their host animals unwell.

Flea-borne typhus is endemic in parts of LA and Orange County.

The disease also often occurs in Texas and Hawaii.

Around 200 cases occur every year throughout the US, particularly in coastal regions.

Bacteria spread when faeces from an infected flea contaminate a person’s cut or graze while the flea is sucking their blood.

If the person scratches the flea-bite area, the bacteria from the faeces can enter their bloodstream.

Bacteria can also be rubbed into a person’s eyes, or, in rare cases, inhaled.

Flea-borne typhus can be treated via antibiotics, with most people recovering within a few days.

Between two and four percent of people who do not receive treatment die worldwide.

Flea-borne typhus can be prevented by avoiding contact with fleas via:

‘Although typhus normally occurs throughout LA County, we are observing several cases in the downtown Los Angeles area,’ the city’s county health officer Muntu Davis said in a statement.

‘We encourage pet owners to practice safe flea control and encourage all cities in the county to ensure maintenance of their trash clean-up and rodent control activities.’

Due to the infection taking up to two weeks to cause symptoms, the exact number of sufferers is unclear.

Officials are investigating where exactly the cases occurred.

Typhus usually affects around 200 people across the US every year, according to the California Department of Public Health (CDPH).

Health officials were alerted to the outbreak when a cluster of nine cases occurred in downtown LA between July and August.

The infection is endemic in parts of LA and Orange County, Southern California.

Fleas carrying the infection can live on cats, rats or opossums, however, the animals themselves do not suffer symptoms.

Typhus often spreads in areas where there is an accumulation of trash that attracts wild animals.

The infection cannot be transmitted from person-to-person and is treatable with antibiotics. There is no vaccine in the US.

Up to four percent of people worldwide who are untreated die, the CDPH claims.

This comes after Texas experienced a flea-borne typhus outbreak around this time last year.

More than 400 cases occurred from the start of 2017 to the end of November – the highest number for 16 years.

Coronavirus: Britons on Diamond Princess cruise ship to be…

Coronavirus vaccine could be available ‘within…

Texas scientists say their discovery could lead to a…

Banning tanning beds ‘could prevent up to 10MILLION…