The globally recognised treatment of cooling the brain after a head injury does not help or reduce the risk of permanent damage, a study has found.

Hypothermia treatment has been used for decades around the world to treat those who have injured their head in the belief it slashes inflammation.

But scientists now warn the treatment not only takes up valuable time but may also increase a patient’s risk of bleeding and infection. 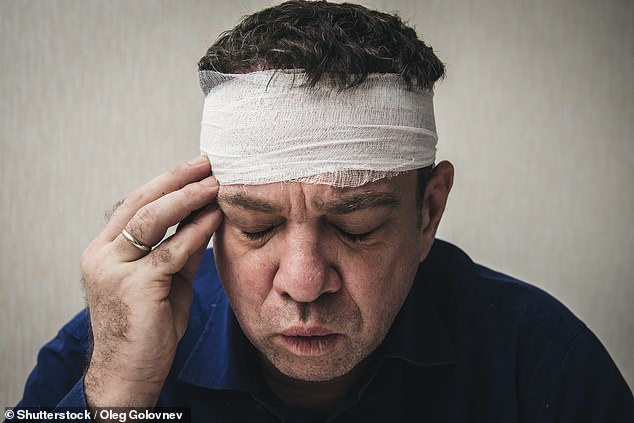 Cooling the brain after a head injury does not help, research suggests (stock)

‘From now on, patients should not have to endure the risks of hypothermia because we now know there are no benefits,’ co-lead author Professor Jamie Cooper, from Monash University, said.

The Australian researchers analysed 511 people from six countries who suffered a traumatic brain injury (TBI) between 2010 and 2017.

Some of the participants received cooling therapy as soon as possible after their injury.

This usually involved them being injected with ice-cold saline in the ambulance on the way to hospital.

They then had their body temperatures further reduced via cold body wraps in A&E for between three and five days.

The remaining participants did not undergo any cooling treatment.

WHAT IS HYPOTHERMIA TREATMENT?

Hypothermia treatment is widely used across the US and Europe among patients who have suffered a severe brain injury.

This may be done via a special cap or cooling helmet.

Patients may also be wrapped in a cooling sheet or laid on a mattress filled with cold air or liquid.

In theory, this reduces inflammation and slows the rate at which brain cells die.

Hypothermia also reduces the amount of oxygen the brain needs.

But studies have produced mixed results on whether the treatment actually reduces a patient’s risk of death or disability.

Cooling treatment may even increase the risk of pneumonia and bleeding, as well as lowering a patient’s heart rate and blood pressure to dangerous levels.

The researchers, who were also led by Alistair Nichol, based hypothermia therapy’s benefits on whether it allowed the patient to live independently after their injury.

Results showed 49 per cent of the participants managed to live alone and care for themselves after their TBI regardless of whether they had cooling treatment or not.

‘This study is the final word on whether hypothermia as a treatment for TBI works,’ Professor Cooper added.

It was published in the Journal of the American Medical Association and presented at the Congress of European Society of Intensive Care Medicine in Paris.

Up to 60 million people around the world will suffer a TBI this year alone. And more than half of the world’s population will endure at least one TBI at some point in their lives.

This study contradicts previous research that suggested heart attack victims may be more likely to survive if they undergo brain cooling.

This involves bringing down a patient’s brain temperature from 37°C to between 32°C and 34°C via a special cap.

An air or fluid filled mattress or blanket could also be used. In theory, this slows the rate at which brain cells die once they are starved of oxygen.

How to live longer: Three cooking oils proven to increase…

Heather Planner died after being given other patient’s…

Coronavirus in the U.S.: 5 Things to Do If You’re Worried

Coronavirus: How a ‘drive-through’ testing…