Unable to ever stop at one drink? Well, now science may finally have the answer – and your parents could be to blame.

Researchers claim binge drinking could be triggered by a genetic fault that means some people need more alcohol to enjoy themselves.

But now the exact pathway alcohol uses to cause the reaction has been uncovered by researchers at the University of Illinois at Chicago. 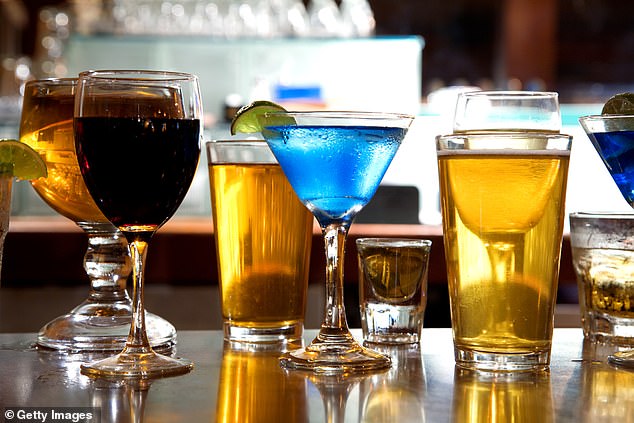 However, some people naturally have less of the KCNK13 channel – meaning they need to drink ‘much more’ to get the same pleasure.

Professor Mark Brodie, author of the research, told MailOnline this would lead to an ‘increased predisposition to binge drink’.

The study, published in the journal Neuropharmacology, used mice in a range of experiments to test their hypothesis.

In one experiment, the scientists genetically reduced the KCNK13 channel in their VTAs by about 15 per cent compared with normal mice.

The KCNK13-deprived mice drank 20–30 per cent more alcohol than their normal counterparts.

Professor Brodie said: ‘We believe mice with less KCNK13 in the VTA drank more alcohol in order to achieve the same reward from alcohol as normal mice.’

He said this was ‘presumably because alcohol was triggering the release of less dopamine in their brains’.

However, Professor Brodie admitted they ‘don’t know’ how much more alcohol a person with reduced KCNK13 expression may drink.

Another test observed the neuronal response to alcohol in the VTA region for mice with less KCNK13 compared to normal mice.

Neurons of the genetically modified mice were 50 per cent less responsive to alcohol than those from the normal mice.

Professor Brodie said the research offers hope of an ‘extremely exciting’ target for drugs that could help alcoholics.

‘Theoretically, there may be several ways to target this protein pharmacologically to treat alcohol use disorders’, he said.

‘A drug that prevented alcohol from binding to this ion channel may be useful in blocking some of the rewarding properties of alcohol.’

Targeting this channel would only dampen the effects of alcohol and not the brain’s response to pleasure in general.

In the US, an estimated 88,000 people die from alcohol-related causes annually, according to figures.

Researchers are unsure how many people may have a reduced KCNK13 channel. They plan to conduct further trials to investigate.

DO YOU DRINK TOO MUCH ALCOHOL? THE 10 QUESTIONS THAT REVEAL YOUR RISK

One screening tool used widely by medical professionals is the AUDIT (Alcohol Use Disorders Identification Tests). Developed in collaboration with the World Health Organisation, the 10-question test is considered to be the gold standard in helping to determine if someone has alcohol abuse problems.

The test has been reproduced here with permission from the WHO.

To complete it, answer each question and note down the corresponding score.

0-7: You are within the sensible drinking range and have a low risk of alcohol-related problems.

Over 8: Indicate harmful or hazardous drinking.

8-15: Medium level of risk. Drinking at your current level puts you at risk of developing problems with your health and life in general, such as work and relationships. Consider cutting down (see below for tips).

16-19: Higher risk of complications from alcohol. Cutting back on your own may be difficult at this level, as you may be dependent, so you may need professional help from your GP and/or a counsellor.

20 and over: Possible dependence. Your drinking is already causing you problems, and you could very well be dependent. You should definitely consider stopping gradually or at least reduce your drinking. You should seek professional help to ascertain the level of your dependence and the safest way to withdraw from alcohol.

Severe dependence may need medically assisted withdrawal, or detox, in a hospital or a specialist clinic. This is due to the likelihood of severe alcohol withdrawal symptoms in the first 48 hours needing specialist treatment.