A new weapon has been discovered in the fight against Parkinson’s disease after scientists worked out a way to get rid of toxic clumps of protein in the brain.

The clumps, called Lewy bodies, build up to damage nerve cells and cause cell death, triggering the crippling disease.

The body can’t get rid of the Lewy bodies naturally because they aren’t properly flagged up for destruction, and medics don’t know how to stop them forming.

But researchers have now found the molecule which stops them being condemned and, by blocking it, they can make sure they are removed and don’t build up again. 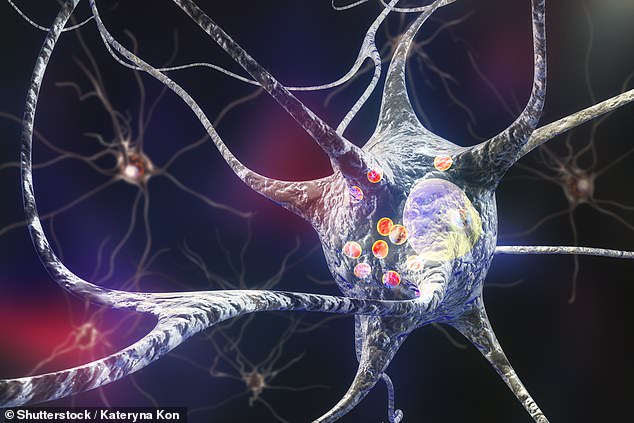 Scientists say blocking a protein which prevents the brain’s natural waste disposal system could get rid of Lewy bodies which build up inside nerve cells (illustrated by the red circles in the image) and damage them, causing symptoms of Parkinson’s disease

Scientists at Georgetown University Medical Center in Washington DC say the molecule, called USP13, has never been linked to Parkinson’s disease before.

Dr Liu added the molecule ‘may be a therapeutic target in Parkinson’s disease and other similar forms of neurodegeneration.’

Lewy bodies are also linked to a type of dementia and a condition called multiple system atrophy, which causes muscle control problems all over the body

Parkinson’s disease is a slowly-progressing condition which damages the brain over time and causes people to shake uncontrollably and lose the ability to move.

WHAT IS PARKINSON’S DISEASE?

It develops gradually, sometimes starting with a barely noticeable tremor in just one hand.

But while a tremor may be the most well-known sign of the condition, it also commonly causes stiffness or slowing of movement.

Between seven and 10 million people globally have the disease.

Of those, the majority of cases have no known cause although scientists suspect a mix of genetic, epigenetic and environmental factors.

Parkinson’s disease cannot be cured, but medications can help control symptoms, often dramatically. In some later cases, surgery may be advised.

Around one in 500 people are thought to be affected by the incurable disease – an estimated 127,00 people in the UK have it.

The Georgetown scientists’ research could provide a ray of hope for these people if the proteins causing nerve damage can be stopped.

Although it is unlikely damage could be undone, blocking the build-up of Lewy bodies could stop the condition progressing further.

Dr Liu and colleagues made the discovery when they compared the brains of dead people with Parkinson’s disease to those without it.

Levels of the USP13 protein were much higher in patients with illness, who also had the build-up of Lewy bodies which had caused their nerve damage.

When the protein was blocked in the brains of mice, Lewy bodies were cleared and did not build up again, cell death was prevented, and their mobility was better.

The process essentially works because the body has a system in unwanted proteins in the brain have to be marked for destruction before they are gotten rid of like putting your bin out.

But if the proteins aren’t flagged up – like bins that aren’t put out – they stay in the brain and build up to make toxic clumps. USP13 causes this to happen.

So by getting rid of USP13, the brain can rid itself of the damaging proteins and avoid crippling nerve damage.

Dr Liu said her research suggests ‘other neurodegeneration disorders that feature protein clumps, such as Alzheimer’s disease, may have a similar pathology.’

The research was published in the journal Human Molecular Genetics.

High blood pressure: The 16p fruit shown to lower your…