Smokers who regularly spend time with vapers are 20 per cent more likely to try and quit, new research suggests.

Scientists at University College London claim that being around e-cigarette users encourages smokers to try the gadgets themselves.

The researchers say the findings should ease concerns about vaping, which has been linked to heart and lung damage.

Roughly a quarter of smokers (25.8 per cent) who participated in the study said they regularly spent time with vapers. 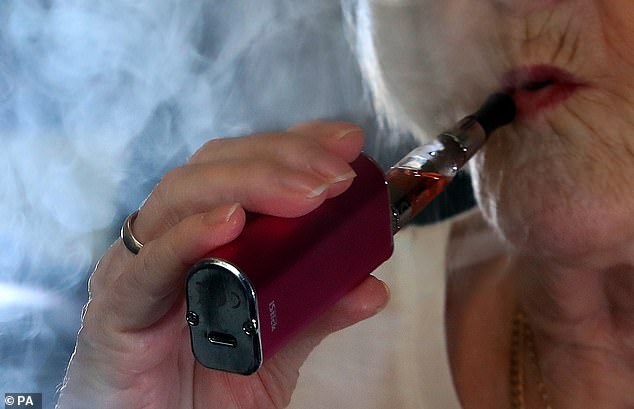 Of these, around a third (32.3 per cent) had made an attempt to quit smoking in the previous year.

By comparison, around a quarter (26.8 per cent) of smokers who did not regularly spend time with vapers attempted to quit in the previous year.

Dr Sarah Jackson, the study’s lead author, said: ‘It is becoming increasingly more commonplace for smokers to come into contact with vapers.

‘Some concerns have been raised that this could re-normalise smoking in England and undermine smokers’ motivation to quit.

‘Our results found no evidence that spending time with vapers discourages smokers from quitting.’

She added the findings ‘should help to alleviate concerns about the wider public health impact of e-cigarettes’. 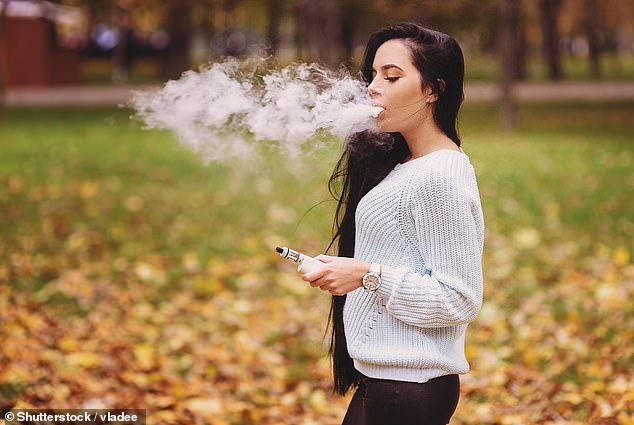 HOW MANY VAPERS ARE THERE IN BRITAIN?

Action on Smoking and Health found there are now four times more e-cigarette users than there was six years ago.

The charity said at the time smokers were ‘finally getting the message’ that switching to vaping can improve health.

Vaping – the term for using e-cigs – is less harmful than conventional smoking, known to directly cause cancer and heart disease.

But the gadgets have been subject to huge controversy recently, due to worrying links between heart and lung damage and vaping.

The study, funded by Cancer Research UK, was published in the BMC Medicine academic journal this morning.

It used data provided by nearly 13,000 participants in the Smoking Toolkit Study, a research project about smoking habits in England.

E-cigarettes are around 95 per cent less harmful than smoking tobacco, according to Public Health England.

Dr Jackson added: ‘A key factor driving these differences may be that smokers who are regularly exposed to e-cigarette use by others are more likely to use e-cigarettes themselves.

‘When smokers’ own use of e-cigarettes was taken into account, exposure to other people using e-cigarettes appeared to have little impact on how motivated smokers were to stop, and whether they made a recent quit attempt.’

She added: ‘So it’s encouraging to see that mixing with people who vape is actually motivating smokers to quit.

‘As the number of people who use e-cigarettes to quit smoking rises, we hope that smokers who come into contact with them are spurred on to give up tobacco for good.’

Public Health England estimates only one in ten people will still be smokers in five years and the nation could become smoke-free by 2030.

Smoking rates in the US have also plummeted, with the number of smokers decreasing by 30 per cent over the past decade, according to CDC data.

What is an e-cigarette and how is it different to smoking tobacco?

An electronic cigarette (e-cigarette) is a device that allows users to inhale nicotine by heating a vapour from a solution that contain nicotine, propylene and flavourings.

But while they have been branded as carrying a lower risk than cigarettes, an increasing swell of studies is showing health dangers.

E-cigarettes do not produce tar or carbon monoxide, but the vapor does contain some harmful chemicals.

Nicotine is the highly addictive chemical which makes it difficult for smokers to quit.

Very similar to normal e-cigarettes but with sleeker design and a higher concentration of nicotine.

Thanks to its ‘nicotine salts’, manufacturers claim one pod delivers the amount of nicotine as a pack of cigarettes.

It is composed of an e-cigarette (battery and temperature control), and a pod of e-liquid which is inserted at the end.

It is known as a ‘heat not burn’ smokeless device, heating tobacco but not burning it (at 350C compared to 600C as normal cigarettes do).

The company claims this method lowers users’ exposure to carcinogen from burning tobacco.