The parents of a pair of formerly conjoined twins – once attached at the skull – say one has been making strides while the other struggles.

Jadon and Anais McDonald, three, were separated two years ago at The Children’s Hospital at Montefiore Medical Center in New York City in a 27-hour surgery.

Recovery has been easier for Jadon, who is learning to read, talks and moves around with a walker, while Anais is confined to a wheelchair and has undergone a multitude of health problems including eczema and seizures.

But parents Christian and Nicole told CNN that they made the right decision to separate the twins, whom would have otherwise certainly died if left attached.

SCROLL DOWN FOR VIDEO 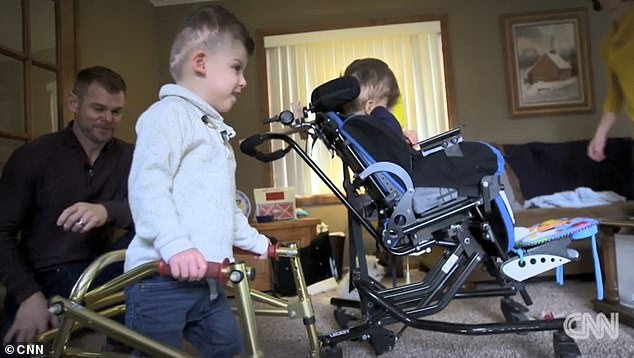 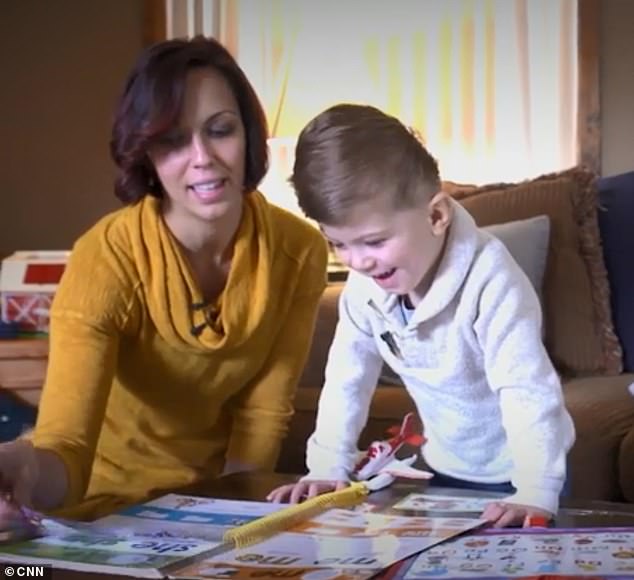 Jadon (with mom Nicole) is learning to read, talks and moves around with a walker 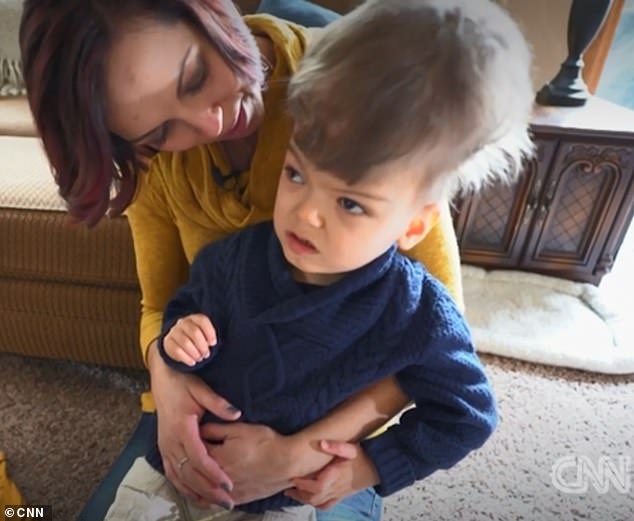 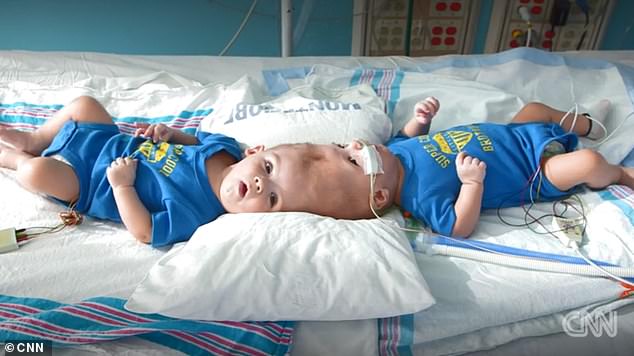 The twins were born in September 2015 near Chicago, Illinois, and were known as craniopagus twins, meaning they were joined at the skull

Conjoined twins occur in approximately one in 200,000 live births, according to the University of Maryland Medical Center.

Around 70 percent of conjoined twins are female and the majority are stillborn.

Twins joined at the skull – known as craniopagus – are the least common type and account for just two percent of all cases.

Around 40 percent of craniopagus twins are stillborn and, of those that survive, approximately one-third die within 24 hours of being born.

Past studies have shown that if the twins are still alive, they face an 80 percent risk of dying by age two if they are not separated.

Nicole and Christian, who also have a five-year-old son named Aza, were faced with an impossible choice: separate the boys and face a lifetime of risks or refuse the surgery and likely watch them die.

Christian told CNN that he and his wife made the right decision.

‘We were going to give them their best shot, and we feel like we did that. We feel like our faith and our belief definitely carried us through.’

The boys were born via Cesarean section in September 2015 near Chicago, Illinois. 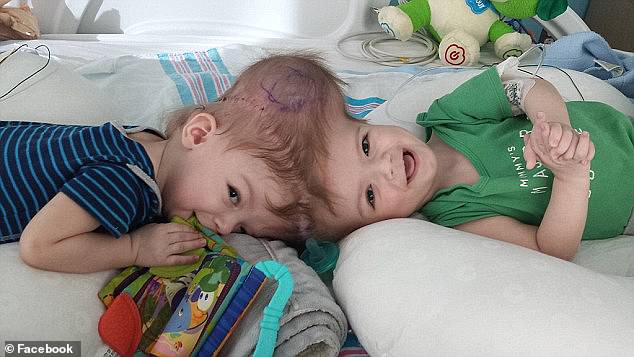 Just five months later, they traveled to Montefiore Hospital in New York to have one of the world’s most esteemed surgeons perform the incredibly rare operation to separate them. Pictured: Anais, left, and Jadon 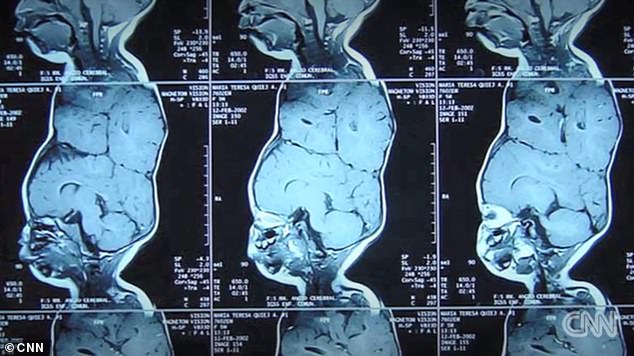 After the twins arrived at the hospital in February, the four-stage separation procedure was planned, in-part, by using 3-D printing technology to map the boys’ anatomy 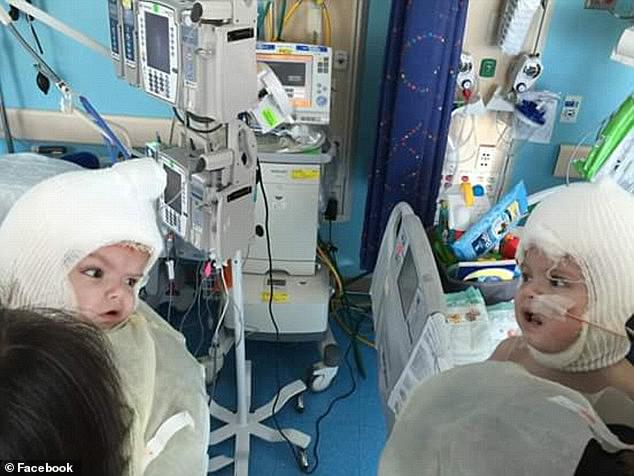 They were joined at the crown and shared a five-to-seven centimeter section of brain tissue.

Just five months later, the McDonalds traveled to Montefiore Hospital in the Bronx, New York, to have one of the world’s most esteemed surgeons perform the incredibly rare operation to separate their heads.

After the twins arrived at the hospital in February, the four-stage separation procedure was planned, in-part, by using 3-D printing technology to map the boys’ anatomy.

The 40-person surgical team was led in part by Dr James Goodrich, who specializes in separating craniopagus twins.

Two months later, in December, Jadon and Anais were transferred to Blythedale Children’s Hospital in Westchester Country to begin rehabilitation.

In September, the family – missing their Midwestern roots – moved to Knox, Indiana.

The boys have had quite different experiences post-surgery.

Jadon has learned to speak and even walks, albeit with the help of a walker. 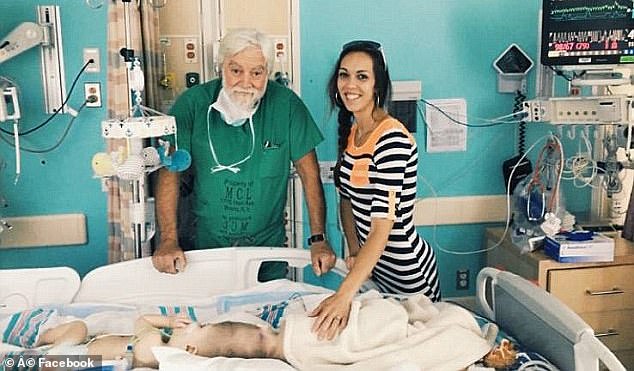 The 40-person surgical team was led in part by Dr James Goodrich (left, with Nicole and the twins), who specializes in separating craniopagus twins 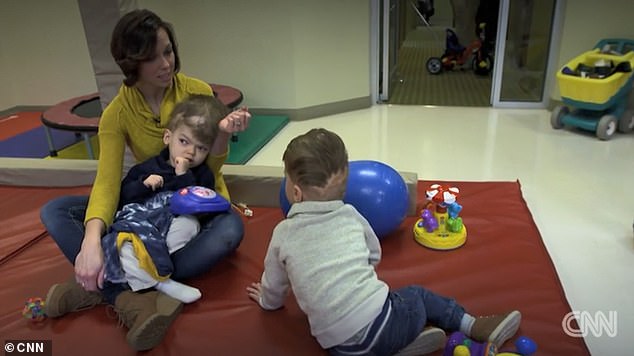 Even though Anais has struggled with several health problems, including eczema and seizures, his parents say he is the most medically sound he has ever been. Pictured: Anais, left with Nicole, and Jado, right

Anais, however, cannot walk and gets around in a specially designed wheelchair and has trouble speaking.

Additionally, Anais suffered from up to 15 seizures a day that would turn him blue.

‘I thought I was losing him forever, and I was devastated,’ Nicole said.

‘What was hard was to see that he was on the same path as Jadon, and then something happened – lots of things happened – to pull him out of that race for a minute.’

However, Nicole said Anais is currently the most medically stable he has ever been.

Once hooked up to a ventilator, he recently had his tonsils removed which allowed him to breathe on his own.

He also can now lift his own head and has begun picking up objects and playing with toys.

Nicole and Christian told CNN that the experience has made them closer than ever before.

‘I think we’re getting stronger and better every day. I mean I guess they say you know, sometimes difficult circumstances,’ Christian said.

‘You go through the fire, you come out stronger on the other side and I think that’s definitely true for us. It’s definitely made us better as a couple.’