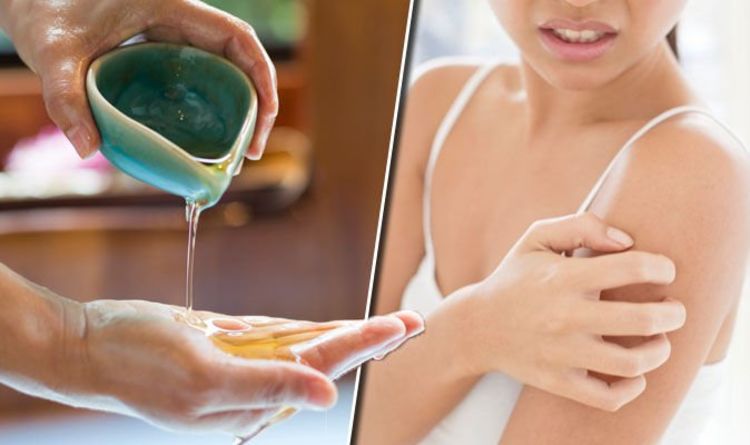 Eczema is a long-term condition that causes the skin to become itchy, red, dry and cracked, according to the NHS. It most often appears in children before their first birthday, but could also develop in later life. Eczema symptoms vary between small patches of dry skin, and large areas of red and inflammation skin all over the body. You could relieve signs of the condition by using coconut oil, it’s been claimed.

Coconut oil could be used as a moisturiser to help eczema patients reduce their symptoms, according to the National Eczema Association.

It contains lauric acid – a type of fatty acid – that works as an antimicrobial and anti-inflammatory, it said.

The oil also boosts hydration of the skin, as well as reducing eczema’s itchiness, and the chances of infection.

“Eczema is a chronic, or lifelong, health condition connected to your immune system and its inflammatory response,” said the National Eczema Association.

“Lauric acid is used to develop monolaurin, which is an antimicrobial agent that can fight bacteria, fungi, yeast, viruses and other pathogens.

“In other words, when you hear people talk about coconut oil having antimicrobial and anti-inflammatory properties beneficial to eczema, they are correct.

“Coconut oil has the natural ability to penetrate the skin quickly and efficiently, which can boost hydration, improve skin elasticity, fight itch and reduce the chances of infection.”

If you’re struggling to find any coconut oil on the high-street, you could also relieve eczema symptoms by using jojoba oil, added nutritionist Yuri Elkaim.

Jojoba oil is a liquid wax that has a similar structure to sebum – the skin’s natural moisturiser.

Try cleaning and dry your hands, before gently massaging the oil onto the affected areas, he said.

There’s currently no cure for eczema, but treatments aim to reduce symptoms.

Some emollients and creams could be used to treat dry skin. Alternatively, a doctor may prescribe a topical corticosteroid cream to reduce swelling.

It’s crucial that patients avoid scratching, as it could damage the skin and make symptoms worse.

Speak to a pharmacist if you’re worried about the signs of eczema, or for advice on the best over-the-counter treatments.

Running Stories: How running helped me fight anxiety and…