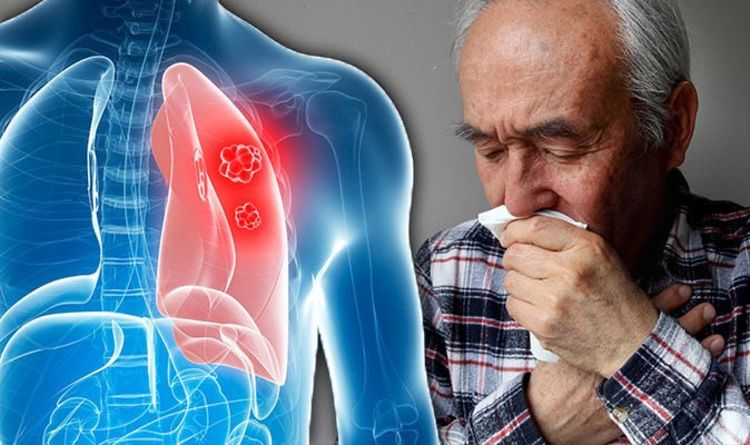 Lung cancer is one of the most common types of cancer to be diagnosed in the UK, according to the NHS. It’s also one of the most serious, as there are usually no symptoms in its early stages. That means it’s usually only diagnosed after the cancer has spread through the lungs or into other parts of the body. But, you could reveal your risk of lung cancer symptoms by checking the colour of your sputum, it’s been revealed.

Coughing up rust-coloured sputum – a mix of saliva and mucus – could be a warning sign of lung cancer.

You could also be at risk of the condition if you cough up blood, or red-tinged sputum.

If you notice any abnormal changes to the colour of your spit, you should speak to a doctor.

“Most lung cancers do not cause any symptoms until they have spread, but some people with early lung cancer do have symptoms,” said the American Cancer Society.

“If you go to your doctor when you first notice symptoms, your cancer might be diagnosed at an earlier stage, when treatment is more likely to be effective.

“The most common symptoms of lung cancer [include] a cough that does not go away or gets worse, and coughing up blood or rust-coloured sputum [spit or phlegm].

“Most of these symptoms are more likely to be caused by something other than lung cancer.

“Still, if you have any of these problems, it’s important to see your doctor right away so the cause can be found and treated, if needed.”

If the cancer has spread to other parts of the body, you could have a yellowing of the skin, bone pain, or find lumps near the surface of the body.

While it’s unlikely the symptoms are caused by lung cancer, it’s still worth getting them checked by a doctor.

Around 45,000 people are diagnosed with lung cancer in the UK every year.

The outlook for lung cancer isn’t as good as other types of cancer, as the symptoms are usually only spotted in its later stages.

About one in three patients live for at least a year after their diagnosis, while one in 20 live for another 10 years.

But you could lower your risk of lung cancer by giving up smoking, if you’re a smoker, and by eating a healthy, balanced diet.

Regular exercise is also crucial to preventing lung cancer. All adults should do at least 150 minutes of moderate-intensity activity every week.