Measles strikes another 60 Americans in a week as outbreak surges to 764 cases, CDC reveals

Another 60 cases of measles were confirmed in the US in the last week alone, the Centers for Disease Control and Prevention revealed Monday.

Now, a total of 764 people in 23 states have been sickened by the highly contagious virus.

The current outbreak has now shattered the previous record – 667 cases in 2014 – since the disease was declared ‘eradicated’ in the US in 2000.

Measles has reappeared, particularly in close-knit and religious communities, and its rise trails growing anti-vaccination sentiments among Americans.

Last week, the Washington outbreak of the disease was declared over, but this week Pennsylvania was added to the list of states with outbreaks with five cases. 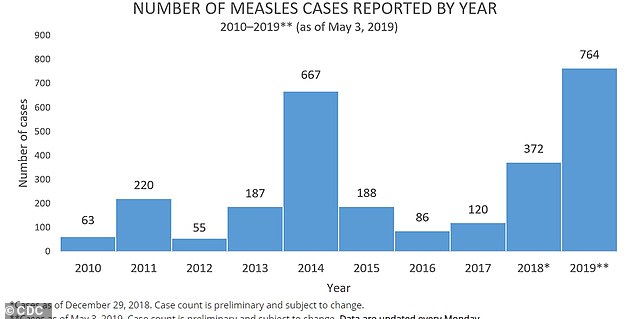 Measles has struck 764 people across the US in yet another surge driven by the disease’s spread in New York, accounting for 50 out of the 60 new cases this week

Once more, the vast majority of the new cases are in New York.

The state contributed 50 out of this week’s 60 new cases.

In New York, measles has spread like wildfire in Orthodox Jewish communities where some believe that a vaccine constitutes a foreign body, which the Torah forbids Jews from allowing to enter their own bodies.

‘Outbreaks in New York City and state are the largest …the longer they continue, the greater the chance measles will once again get a foothold in the United States,’ said Dr Nancy Messonier.

And infectious disease experts expect the numbers of cases will just continue to grow.

‘One of the problems is that because these outbreaks are so large, they take forever,’ says Dr Frank Esper, an infectious disease specialist at the Cleveland Clinic.

‘Think of it like wildfires in California: when it’s a lot of smaller ones, it’s quickly controlled, but, like a fire, measles is extremely infectious and when it gets huge it can take a while [to get under control].’

In an effort to stem the spread of measles, New York City Mayor Bill DeBlasio declared a state of emergency requiring everyone of all ages in the zip codes hit by the measles outbreaks there.

The mayor’s declaration was met with a lawsuit filed by Orthodox parents, which he defeated last week.

Most measles outbreaks began with international travelers, but all of those visitors to the US were old enough to have been vaccinated.

These travelers have primarily come from Israel, Ukraine and the Philippines.

One such traveler also spread the virus to Detroit, Michigan.

CDC officials also underscored the role of misinformation in the current outbreaks.

Social media and on-the-ground community agents have been disseminating misconceptions among many communities about the safety and efficacy of the MMR vaccine.

Vulnerable, religious and insular communities are particularly ‘targeted’ by disinformation campaigns, said Dr Messonier, though officials said they could not determine why these groups are ‘targets.’ 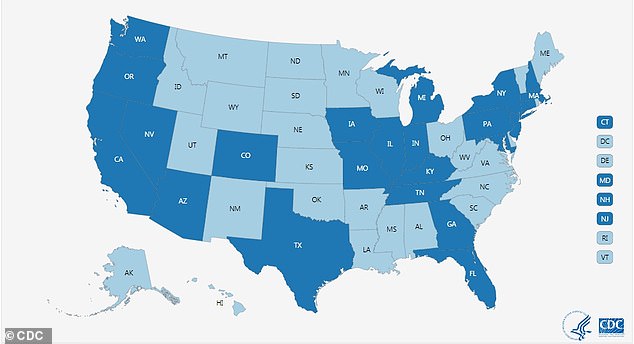 Measles outbreaks have been reported in 23 states, with the highest proportion occurring in New York. The Washington outbreak was declared over last week, but a new one was announced in Pennsylvania on Monday

The Washington state outbreak has now been declared over, after sickening 72 people there in total.

Dr Messonier confirmed that not all of the 704 people who have been diagnosed with measles are unvaccinated.

She explained that in places where there are ‘extreme disease pressures, we know that there can be vaccine failures.’

Anyone who received both doses of the MMR vaccine after 1967 should be protected against measles.

Those who were born before 1957 are believed to been exposed to the disease already.

Health officials say that so far they haven’t seen signs that immunity is waning, but urge everyone to speak to their health care providers and check their shot records.

Anyone over 30 may not still have the antibodies they need to fight the infection circulating.

The year is only a third over, and already there have been more measles cases in 2019 than the US has seen in 25 years, though weekly diagnoses slowed this week

However, Dr Esper notes that tests of the MMR vaccine found that it is effective against the strain currently sweeping the US.

Last week, President Trump joined the chorus, urging parents to vaccinate their children in a shift from his tweets from several years ago warning over links between the MMR vaccine and autism.

When asked if he thought President Trump should publicly decry his previous tweets and sentiments, Secretary of Health and Human Services, Alex Azar defended Trump.

‘Some years ago, there was a debate about that issue,’ Azar said.

‘We can definitely reassure every parent there is no link between vaccines and autism,’ he said, adding that the president’s statement last week marked a ‘strong’ stance on vaccination and the measles outbreaks.

‘The president has been very clear that people should get their shots…and make sure they are up-to-date,’ said Azar.

Dr Esper says that changing tunes as President Trump has done is ‘actually exactly what we’d like to see.

‘Someone that was against the vaccine in 2014 now says go get your vaccine and that is what we’d like to see.’

Although one state outbreak has been declared over, health officials said they do expect more cases to be reported in the days to come.

‘I would guess that we’re still going to see more cases, but the rate at which it goes up will depend on how well-contained the current outbreaks are,’ says Dr Esper.

Do detergents cause childhood asthma? Cases of the disease…

Coronavirus: A Cameroon student on how he recovered

‘I lost my left ear to my tanning addiction’

Man who needs lung transplant travels globe rather than…