Woman, 26, says her brain tumor symptoms were dismissed for 4 months

A woman claims her brain tumor diagnosis was delayed because her doctor was certain her colds, headaches, and loss of appetite were symptoms of pregnancy.

To her distress, her symptoms were routinely batted off, and her doctors told her she was rude for not looking them in the eye – before her diagnosis, a benign tumor, treated with surgery, was confirmed.

It’s a complicated issue: brain tumor symptoms can be vague and masquerade as other conditions, and, if in doubt, doctors start by ruling out the easiest-to-test conditions first – including stress and pregnancy, which are far more common than brain tumors.

But Carrera says the ordeal left her feeling judged and dismissed and prolonged her agony – even though her doctor did apologize for dismissing her. 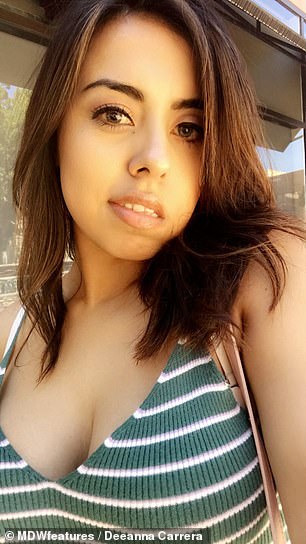 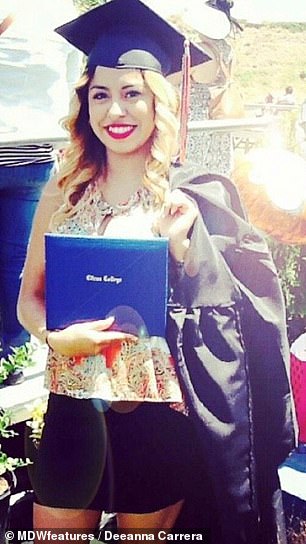 Deeanna Carrera, 26, of Pomona, California pictured (left) after surgery to remove her benign brain tumor, and (right) before her symptoms set in 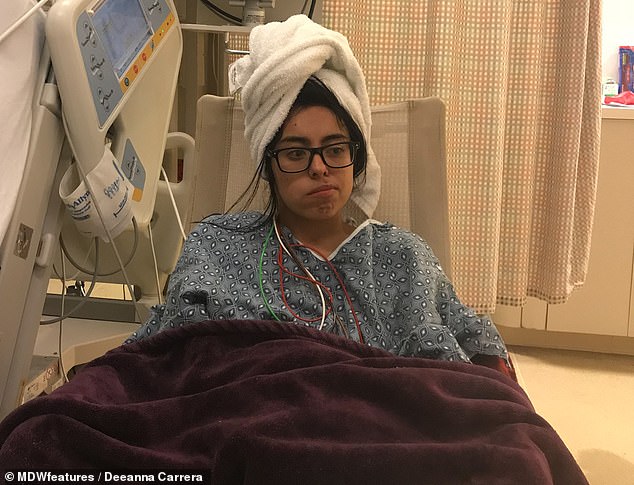 Deeanna was left with facial paralysis after her brain surgery

‘I was confused,’ Carrera said.

‘I kept telling myself that I was okay, but as they continued to get worse, I started to notice that there was something seriously wrong with me, but no one believed me.

‘I felt like I was alone and people made me feel like it was all in my mind when I knew it wasn’t.’

Carrera, a physical therapist, first went to the hospital with ringing ears and relentless sneezing in October 2017.

Her doctor said she had a cold, and to rest up. Carrera dismissed her eye-twitching, which came on days later, and the headaches and weight loss that followed.

But in January 2018, she was pushed to her limit by a four-day excruciating headache, a 30-pound weight loss in just a few weeks, and confusion that left her scrambling her words.

Then came the sleepless nights, kept awake by her headaches, and she finally went back to the doctor.

A flu test came up negative, but doctors said she seemed to be under the weather, and possibly in the early stages. They gave her anti-nausea medication.

Light started to burn her eyes, she couldn’t see, and Deeanna was experiencing dizzy spells, falls and was struggling to walk and her nausea got worse.

Back in the hospital, doctors finally entertained the idea it might not be flu: they told her she might be pregnant. 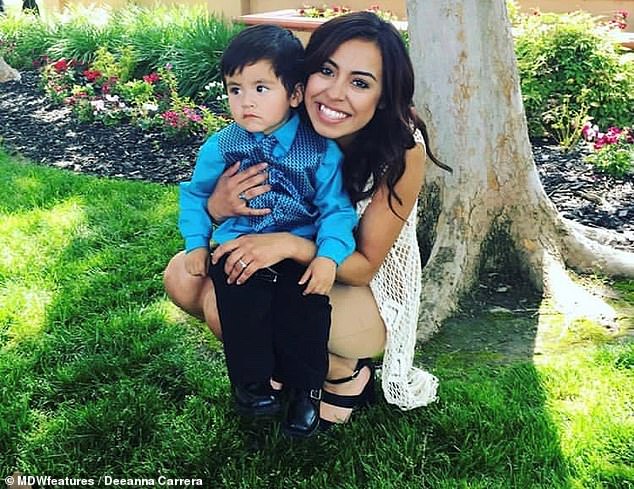 Deeanna, pictured before her brain tumor with her nephew, said she started experiencing splitting headaches and ear-ringing, but doctors said she had the flu 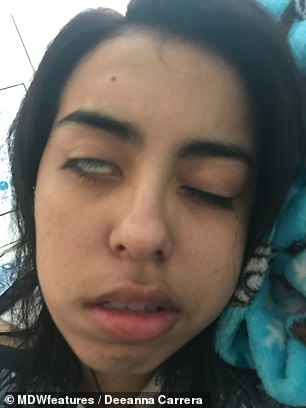 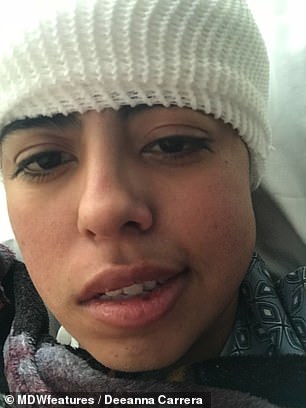 In despair, Carrera went to the hospital for a final time on February 5, 2018 where she was told she wasn’t coping well with stress. To prove that there wasn’t anything wrong with her, doctors sent her for a CT scan – and it showed she had a brain tumor

‘I was mad and irritated because I knew I wasn’t pregnant,’ Carrera said.

She went for a test and an ultrasound scan which showed she wasn’t.

Once more, Carrera says, doctors said she must have the flu. By this point, she claims, she could barely move for the pain, and her mom, Andrea, was caring for her.

‘I was angry and thought I was going crazy because they kept telling me that I was fine,’ Carrera said.

‘I was mostly scared because I didn’t know what to do and my pain was getting worse.

‘I knew that there was something wrong with me but I did not give up.’

In despair, Carrera went to the hospital for a final time on February 5, 2018 where she was told she wasn’t coping well with stress.

To prove that there wasn’t anything wrong with her, doctors sent her for a CT scan – and it showed she had a brain tumor.

Within moments, she was rushed to an alternative hospital where she was treated for a noncancerous acoustic neuroma tumor that was growing on the nerve used for hearing and balance. 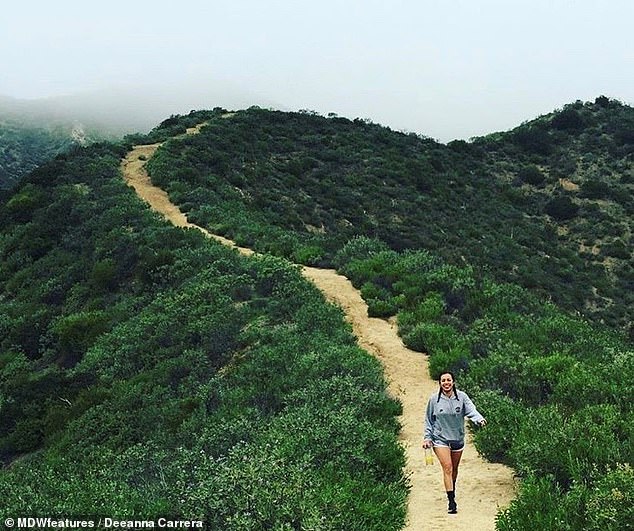 Carrera had her tumor removed on February 12, 2018 and was hospitalized for a month. Here, she is pictured before her brain tumor

WHAT IS AN ACOUSTIC NEUROMA?

An acoustic neuroma, or vestibular schwannoma, is a benign (non-cancerous) tumor in the brain.

It grows on the vestibulocochlear nerve, which helps control hearing and balance.

This nerve runs alongside the facial nerve, which carries information from the brain to the face muscles.

Acoustic neuromas tend to grow slowly and don’t spread to other parts of the brain.

WHO IS AT RISK?

There is only one known risk factor – having a parent who carries the rare genetic disorder neurofibromatosis type 2.

However, that only accounts for 5 percent of cases.

For the rest, it’s something of a lottery

The symptoms of an acoustic neuroma tend to develop gradually and can vary in severity. This can make the condition difficult to diagnose.

A small acoustic neuroma can lead to problems with hearing loss or tinnitus.

A large acoustic neuroma can cause a number of symptoms, including headaches and blurred vision, numbness and a problem with co-ordination on one side of the body.

Occasionally, large neuromas can also result in muscle weakness on one side of the face.

In rare cases, it may also cause changes to the voice or difficulty swallowing (dysphagia).

‘The doctor who saw me said that I was rude and had bad manners because I could not look at him or talk to him directly,’ Carrera said.

‘A few moments later, the doctor came back and apologized to me and I was rushed to a different hospital where they handled my brain tumor.

‘After they transferred me to another hospital that was going to be able to perform brain surgery on me, they explained to me that all the symptoms I had were all symptoms of the tumor I had. I felt relieved that I was not going crazy.’

Carrera had her tumor removed on February 12, 2018 and was hospitalized for a month and was left with facial paralysis on the right side of her face which she has had surgery for.

Following surgery to remove her brain tumor, Carrera had to learn how to speak, eat, swallow, walk and talk again.

After waking up from her surgery, the right side of her face was paralyzed and she had to go through electrotherapy to stimulate her facial nerve muscles, surgery to have an eye weight fitted to help her close her eye, a nasal transplant to help open her nostril so she could breathe again and nerve grafting to help her move her lips.

‘I was scared and confused. Why did this happen to me and why didn’t anyone catch my tumor earlier? I was angry at the world,’ Carrera said.

‘It was irritating not being able to do anything and when I did my speech therapy and facial therapy I would always cry and wasn’t able to sleep because I could not move my face.’

Deeanna’s family have been by her side throughout her journey and have supported her through being stared at in public due to her facial paralysis, she wants to encourage others not to take their lives for granted.

‘The way people stare at me and make me feel like something is wrong with me has been the worst thing about my journey. I wasn’t able to go out in public because people would stare or go out to eat because food would fall out my mouth,’ she said.

‘My family has been by my side throughout the whole thing. My mom mostly was there for me through everything and my mood changes.

‘I don’t have to be monitored, but I go to the doctors weekly or monthly depending on my pain. I am better now than before, but I’m a work in progress. I am working full time now so I can tolerate being out and about much better.

‘Don’t take your life for granted because anything can happen to anyone at any moment. Live life and never let anyone make you feel horrible for doing what is best for yourself or what makes you happy.