Police are the number six cause of death for young American men, study finds

Police use of brutal force is now considered a top 10 of death for young American men – and you’re at 2.5-times greater risk of being killed by a cop if you are a black man, a new study reveals.

The names of men like Eric Garner, Trayvon Martin and Michael Brown have made headlines and became core to the Black Lives Matter movement in the US.

But they’re only three out of thousands who have died in encounters with police in the US in recent years.

Previous official statistics have placed police brutality below the top 10 causes of death for young US men, due largely to the way these deaths are coded by coroner’s offices.

In fact, police have been responsible for so many fatalities in recent years that encounters with cops are now the sixth leading cause of death – just behind cancer – for young American men, according to a new Rutgers University study.

‘It’s important to emphasize that police violence is a threat to public health and police are responsible for…producing a lot of years of life lost.’ 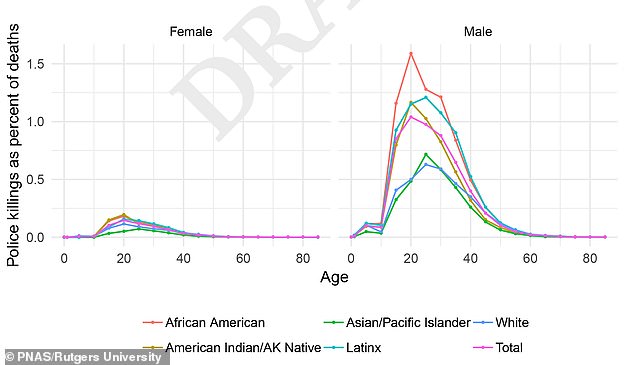 Some 1,100 American men and women are killed in encounters with police each year, accounting for 1.5% of deaths among black men between 25 and 29 (red, right), a graph shows 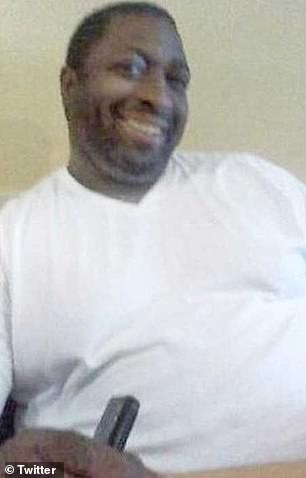 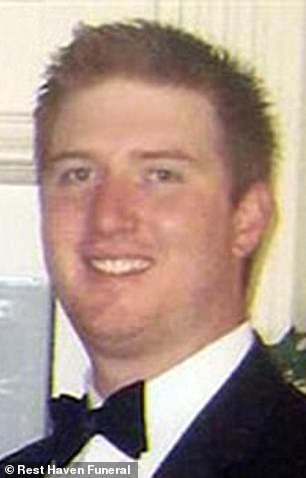 Eric Garner (right) was killed by New York Police Officer Daniel Pantaleo in 2014 when Pantaleo placed in in a forbidden chokehold. Last week, a police judge recommended Pantaleo be fired. Tony Timpa (left) was killed by police after calling 911 in the midst of a schizophrenic episode in August 2016

Just last week, court recordings detailed how yet another young American – Tony Timpa, 32 – was killed by police after the unarmed man called 911 during a schizophrenic episode.

Each year in the US, an average of about 1,100 people men and women are killed in encounters with the police, estimate the Rutgers researchers.

Nonetheless, people of color are at far greater risk of dying at the hands of law enforcement than are white men or women.

For black men, the risk is two-and-a-half times greater, meaning the odds they will be killed by police are one in 1,000.

Native American men are also at a high risk when they encounter police. They are 1.5 times more likely to be killed under these circumstances

Latino men face a 1.4 times greater risk of a fatal cop encounter than their white counterparts do.

On the whole, police officers are a lesser danger to women, who are 20 times less likely to be killed in encounters with law enforcement than men are.

But black, Latina and Native American women are between 1.2 and 1.5 times more likely than white women to be killed by police officers.

And police violence has only increased in recent years, surging by about 50 percent since 2008. 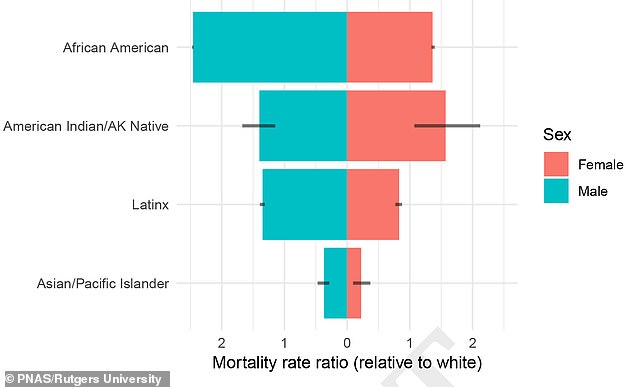 Yet National Vital Statistics reports have undercut the number of deaths caused by cops by about 50 percent, due to cracks in the system of cause of death coding used in coroners offices.

Instead, the Rutgers team used media reports – which have been shown to catch nearly all of the deaths captured in Vital Statistics data, as well as about 50 percent that the official numbers do not capture – to make their fatality estimates.

Dr Edwards hopes that the glaring revelation that police officers are the sixth leading cause of death (just behind cancer) of young adult men will encourage Americans to look at police violence as a public health issue.

‘When someone is killed by police, it doesn’t just affect them,’ Dr Edwards explained in an interview with DailyMail.com.

‘It affects their family, their community, their friends – those spill-over consequences can have really negative effects.’ 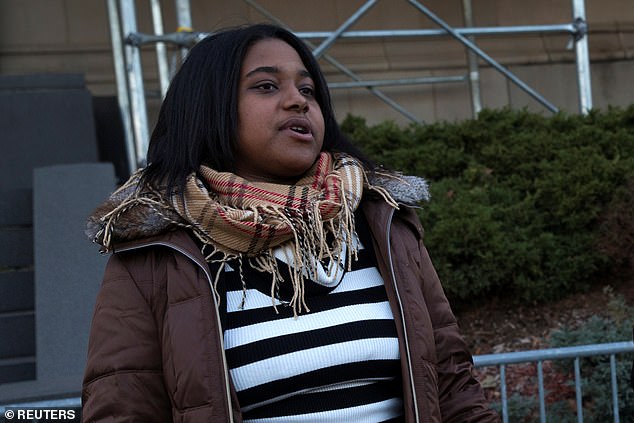 In 2017, Erica Garner (pictured) died of an asthma attack that triggered a heart attack, three years after her father was killed by cops

And those consequences weigh more heavily on communities of color.

‘When an unarmed black man is killed by police, black people in that area have an increase in depression,’ said Dr Edwards, citing previous research.

‘When the victim is white, there’s no change.’

There are also more illnesses in heavily-policed and often black and Latinx communities.

His last words, ‘I can’t breathe,’ became a rallying cry for activists calling for an end to police violence against black people in the US.

For three years, his daughter, Erica, helped to lead the effort, but in 2017 she suffered a catastrophic asthma attack, which triggered a heart attack and ultimated killed her.

She was just 27, and had lived under immense stress after her father’s death. 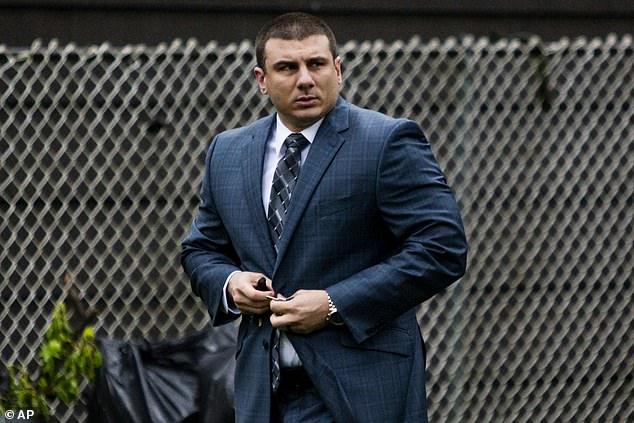 Five years after Daniel Pantaleo (pictured) killed Eric Garner, an NYPD judge said last week that he should be fired

‘How long it took for that to happen is consistent with the idea that, if we treat [police violence] as harmful to our communities, the community can have a stronger role in deciding how those paid employees behave,’ said Dr Edwards.

He says that looking at police violence as a public health concern may help us shift that perspective toward the needs of the community, and away from situations that unnecessarily pit police officers against the communities they’re supposed to serve.

‘Police themselves will tell you they are not equipped to respond to many of the situations’ – like mental health crises – ‘that they’re sent out to – but they are trained in fatal violence.

‘There are many communities in which interactions with governments [and their enforcers] are always hostile, and a public health approach can help us think about ways we can do it differently.’