US regulators have told four companies to remove 44 of their flavored e-liquid and hookah tobacco products that do not have the required approval for sale in the US.

The move comes against the backdrop of the US Food and Drug Administration’s efforts to curb the usage of the addictive substances among young adults.

The FDA said the products had been introduced into the market after the effective date of a rule that extended FDA’s authority to all tobacco products, thereby making them adulterated or misbranded. 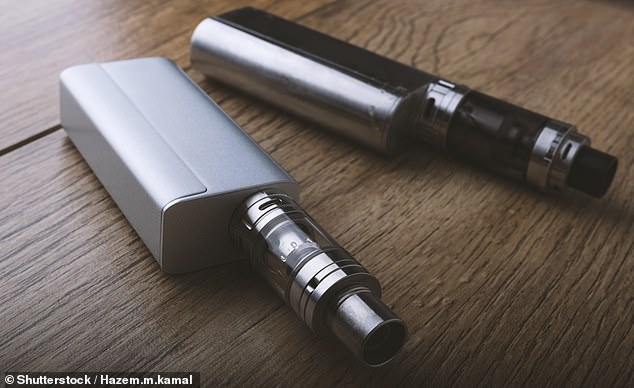 E-cigarettes are generally thought to be safer than traditional cigarettes, but the long-term health effects of the nicotine devices remain largely unknown

E-cigarettes have existed in a regulatory gray area for years and a US federal judge in July ordered the FDA to implement a 10-month deadline for submitting a formal application by e-cigarette makers to keep their products on the market.

E-cigarettes are generally thought to be safer than traditional cigarettes, but the long-term health effects of the nicotine devices remain largely unknown.

The health agency previously asked nearly 90 makers of Electronic Nicotine Delivery System products for information, including evidence that the product is legally marketed and a number of companies have removed their products from the market.

‘Today’s actions make clear that we will continue to keep a close watch on whether companies are breaking the law and will take swift steps when violations are found. Our work in this area has already resulted in a number of companies removing products from the market,’ said Acting FDA Commissioner Ned Sharpless, MD.

‘The marketing of illegal tobacco products is particularly concerning given the epidemic of youth vaping that we’re facing, which we know has resulted in part from irresponsible practices of manufacturers, importers and retailers who have targeted kids in their marketing of these products.

‘We are committed to tackling the troubling trend of youth e-cigarette use by continuing to use all available regulatory tools to ensure these products aren’t being marketed to, sold to, or used by kids.

‘It is critical that we remain vigilant in our efforts to stem the increase in use and nicotine addiction in children driven by e-cigarettes, which threatens to erase the years of progress we’ve made combatting tobacco use among kids.’

Another 90 evacuees released from quarantine in Texas where…