Measles vaccine: Dr Chris warns of deadly complications if you DON’T get the jab 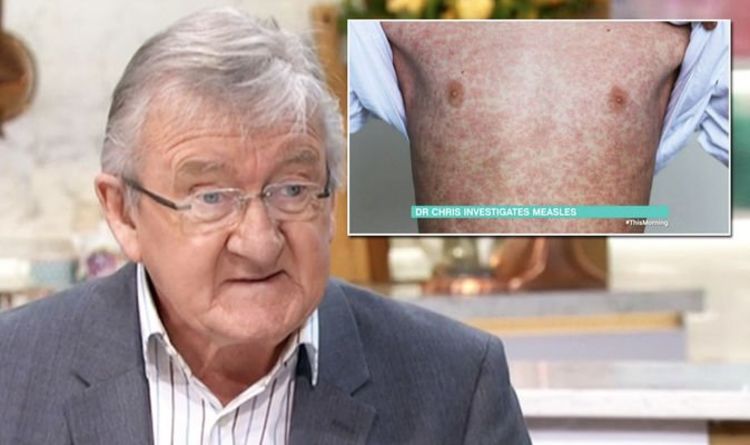 Measles is on the rise in the UK according to figures, meaning Britain has lost its ‘measles-free’ status. The World Health Organization previously confirmed the UK eliminated measles in 2016. The rise in measles cases is believed to be caused by people opting against the measles vaccine. In 1998, Dr Andrew Wakefield published a research paper claiming to link the measles vaccine to autism.

While the paper was retracted after the link was found to be false, anti-vaxxers still cite the paper.

Prime Minister Boris Johnson has now ordered urgent action to boost the number of children and young people receiving vaccinations, and TV doctor Dr Chris Steele took to ITV’s This Morning to urge people to get the vaccine and to warn of the complications that can occur.

The initial symptoms of measles are a cold-like symptoms, watery, swollen and red eyes, and small greyish-white spots in the mouth.

But around two to four days after the initial symptoms, a rash can develop.

The rash looks like reddy brown spots, said Dr Chris, and these spread into patches.

Dr Chris added: “All you have to do is look at the child’s face. It’s called ‘miserable measles’.”

What’s most worrying, says Dr Chris, is the serious complications associated with measles.

Dr Chris said: “There can be serious complications and you must never forget this.”

Measles can cause a range of complications – fits or convulsions are a common complication, but in some cases, it can develop into meningitis or encephalitis (infection of the brain).

For people who have found the flu vaccine didn’t prevent them getting flu, and doubt the effectiveness of the measles vaccine, Dr Chris offered his expert advice.

He said: “Flu is caused by many different types of viruses and the vaccine only protects against two or three.

“[The measles vaccine] is specifically against measles, there’s evidence it does not cause autism and doesn’t overload the immune system.”

Dr Chris’ final message was: “Get injected, not infected.”

Measles can be avoided with the measles, mumps and rubella (MMR) vaccine.

The vaccine is given as part of the routine NHS childhood vaccination programme – One dose is usually given to a child when they’re 12 to 13 months old. A second dose is given at 3 years and 4 months.

The NHS states: “Contact your GP if you’re uncertain about whether your child’s vaccinations are up-to-date.

“You or your child can be vaccinated at any point if you haven’t been fully vaccinated before.”