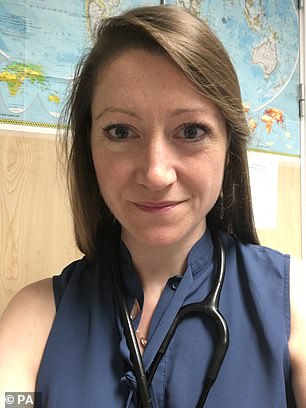 A British doctor who has helped fight Ebola in the Democratic Republic of Congo says an experimental vaccine ‘has changed the path of the outbreak’.

Dr Catherine Houlihan, from Aberdeen, returned home to the UK from the African nation in June after spending a month at the heart of the epidemic.

The 39-year-old said the jab has helped stop the situation spiralling out of control, amid fears it could spread to neighbouring countries.

Official figures show 2,070 people have died from Ebola in the DRC’s current outbreak, which is the second worst ever recorded in history.

Dr Houlihan is a lecturer in infectious diseases and virology at both the London School of Hygiene and Tropical Medicine and University College London.

She said: ‘I think that the vaccine has changed the path of this outbreak. We could have already had a death toll similar to West Africa had we not had it.’

At least 11,000 people died in the worst ever outbreak of the killer virus between 2013-16, which decimated Sierra Leone, Guinea and Liberia.

Dr Houlihan said the data shows that the experimental vaccine, developed by pharmaceutical firm Merck, is around 97 per cent effective.

‘Health care workers are one of the highest-risk groups for catching Ebola and this extra protection enables them to carry out their roles far more effectively,’ she said.

The vaccine, called V920, was developed with support from the UK Government’s Department for International Development (DFID).

More than 200,000 people have now been given the vaccine, proven to be around 97 per cent effective at preventing the lethal virus. 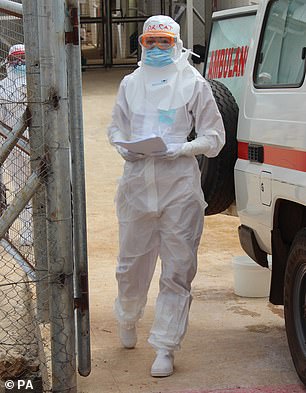 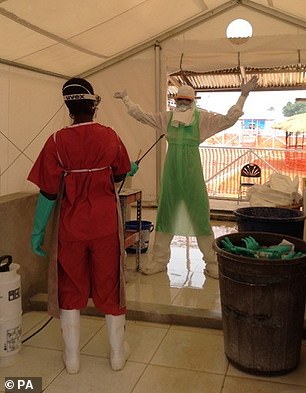 The 39-year-old said the jab has helped stop the situation spiralling out of control, amid fears it could spread to neighbouring countries.

Dr Houlihan was situated in Goma and Butembo in the war-torn North Kivu province, where more than 120 militia groups operate.

She said five per cent of all cases in the DRC are health care workers, most of whom work in smaller health facilities and not Ebola treatment centres.

She praised the bravery of local staff who have dealt with the outbreak from when it began last August and continue to work despite the dangers.

Efforts to contain the virus have been hampered by violent attacks on health workers and treatment centres.

Two Ebola health workers were killed last month in North Kivu and the World Health Organisation reported 42 attacks on treatment centres between January and May.

Dr Houlihan said: ‘The security situation in DR Congo is the biggest difference between this outbreak and the West Africa one. 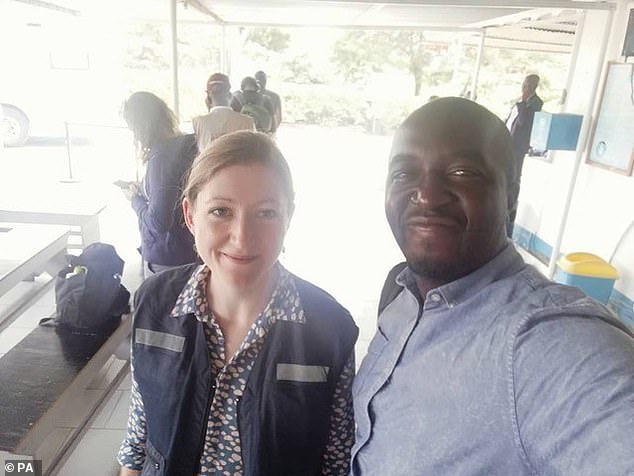 Dr Houlihan was situated in Goma and Butembo in the war-torn North Kivu province, where more than 120 militia groups operate 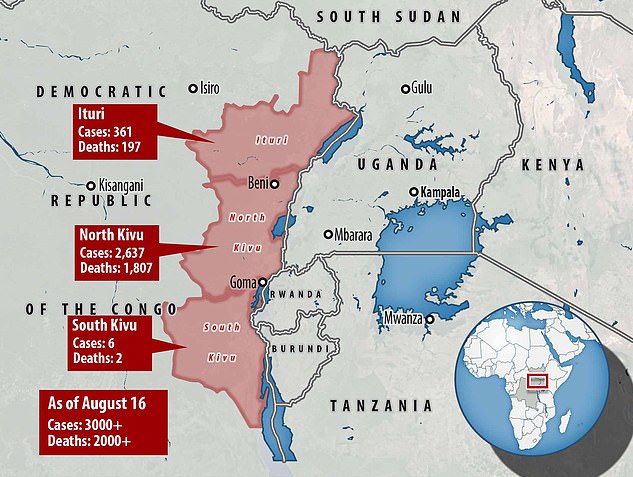 The Ebola death toll in the Democratic Republic of Congo tops 2,000 a year after the outbreak was declared, government data shows

A TIMELINE OF THE CONGO’S EBOLA OUTBREAK

Aug. 1: The outbreak is declared in northeastern Congo’s North Kivu province, a turbulent region where dozens of rebel groups are active.

Aug. 8: The first of scores of thousands of vaccinations begin with an experimental but effective vaccine.

Sept. 5: Congo says the outbreak spreads to Butembo, a city of more than 1 million people.

Oct. 2: Red Cross workers are attacked by community members in an early sign of resistance to Ebola response efforts in a region where the virus had never been recorded before.

Oct. 17: After an emergency expert meeting, the World Health Organization says it is “deeply concerned” but the outbreak is not a global emergency.

Nov. 29: WHO says this is now the second largest Ebola outbreak in history with 426 cases.

Dec. 26: Congo bars people in key Ebola-affected areas from voting in the presidential election, sparking anger and feeding rumors that the outbreak is a political ploy.

Feb. 24: Assailants attack an Ebola treatment center in Katwa, killing one caretaker and leading aid group Doctors Without Borders within days to suspend operations there and in Butembo.

April 12: After a second emergency meeting, WHO says the outbreak is not yet a global emergency.

April 19: Attackers storm a hospital in Butembo and kill a WHO epidemiologist.

May 3: Congo’s health ministry says more than 1,000 people have died in the outbreak.

June 14: After a third emergency meeting, WHO says the outbreak is not yet a global emergency.

July 14: Congo’s health ministry confirms the first Ebola case in Goma, a city of more than 2 million people on the Rwandan border.

July 17: After a fourth expert meeting, WHO declares an international emergency. More than 1,600 people have died since the outbreak began.

July 30: Congo officials say a second Ebola case is confirmed in Goma, with no link seen to the earlier case.

Aug. 1: Congo officials say the victim’s wife and 1-year-old daughter test positive for Ebola, the first transmission of the virus in Goma.

Aug. 1: Rwanda closes its border with the Congo close to the city of Goma, but later reopens it the same day and a health minister denies it was ever shut.

Aug. 7: Three Congolese medics are detained over the murder of a World Health Organization (WHO) doctor, Richard Valery Mouzoko Kiboung, who was shot dead on April 19 in an attack on a hospital in the eastern city of Butembo.

Aug. 13: Ebola can no longer be called an incurable disease, say scientists, after successful drug trials in the DRC.

Aug. 16: The province of South Kivu announces its first confirmed cases, two people, one of which was a fatality.

‘Certainly, doing visits to small health centres outside of Goma wasn’t a comfortable journey, knowing that you might meet armed militia and that health workers have been targets.

‘We drove past people carrying a gun and it was sometimes a struggle to tell whether they were the army or Mai Mai militias if they were wearing camouflage gear.’

Dr Houlihan, who spent some time in Sierra Leone during the West Africa outbreak, added: ‘It was more anxiety provoking than my previous experiences.’

International Development Secretary Alok Sharma said: ‘Ebola has already taken far too many lives in the Democratic Republic of Congo.

‘Shockingly, it has wiped out entire families and, a year after this outbreak started, it is showing no sign of slowing down.

‘The UK has led the way in tackling this killer disease and we can be proud of our support to create a life-saving Ebola vaccine which has inoculated 180,000 people so far.

‘Diseases like Ebola have no respect for borders. This could be spread beyond DRC. It is essential the rest of the international community steps up to help.’

Calling on the international community to chip in and help, he added: ‘If we don’t act now, many thousands more lives could be lost.’

WHAT IS EBOLA AND HOW DEADLY IS IT?

Ebola, a haemorrhagic fever, killed at least 11,000 across the world after it decimated West Africa and spread rapidly over the space of two years.

That epidemic was officially declared over back in January 2016, when Liberia was announced to be Ebola-free by the WHO.

The country, rocked by back-to-back civil wars that ended in 2003, was hit the hardest by the fever, with 40 per cent of the deaths having occurred there.

Sierra Leone reported the highest number of Ebola cases, with nearly of all those infected having been residents of the nation.

WHERE DID IT BEGIN?

An analysis, published in the New England Journal of Medicine, found the outbreak began in Guinea – which neighbours Liberia and Sierra Leone.

A team of international researchers were able to trace the epidemic back to a two-year-old boy in Meliandou – about 400 miles (650km) from the capital, Conakry.

Emile Ouamouno, known more commonly as Patient Zero, may have contracted the deadly virus by playing with bats in a hollow tree, a study suggested.

HOW MANY PEOPLE WERE STRUCK DOWN?

Figures show nearly 29,000 people were infected from Ebola – meaning the virus killed around 40 per cent of those it struck.

Cases and deaths were also reported in Nigeria, Mali and the US – but on a much smaller scale, with 15 fatalities between the three nations.

Health officials in Guinea reported a mysterious bug in the south-eastern regions of the country before the WHO confirmed it was Ebola.

Ebola was first identified by scientists in 1976, but the most recent outbreak dwarfed all other ones recorded in history, figures show.

HOW DID HUMANS CONTRACT THE VIRUS?

Scientists believe Ebola is most often passed to humans by fruit bats, but antelope, porcupines, gorillas and chimpanzees could also be to blame.

It can be transmitted between humans through blood, secretions and other bodily fluids of people – and surfaces – that have been infected.

IS THERE A TREATMENT?

The WHO warns that there is ‘no proven treatment’ for Ebola – but dozens of drugs and jabs are being tested in case of a similarly devastating outbreak.

Hope exists though, after an experimental vaccine, called rVSV-ZEBOV, protected nearly 6,000 people. The results were published in The Lancet journal.