How to get rid of visceral fat: Best cooking oil to reduce the dangerous belly fat 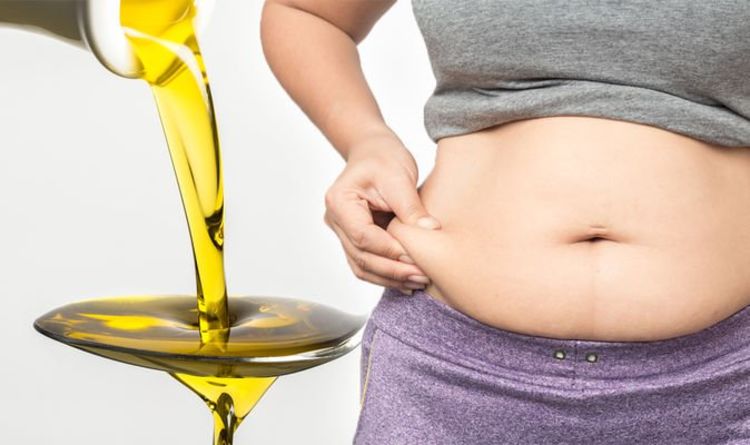 Visceral fat is a harmful type of body fat because it’s stored in the abdominal cavity next to many vital organs, including the liver, stomach and intestines. Having too much visceral fat has been linked to an increased risk of cardiovascular disease, so it’s important to do what you can to reduce it. A diet high in saturated fat can lead to visceral fat build-up, so experts recommend making some diet changes. Cutting down on saturated fat is key, and when it comes to what oil to cook with, studies have suggested using coconut oil.

Studies have shown coconut oil may boost metabolism and decrease the amount of fat you store in response to high calorie intake.

Controlled studies have also suggested it may lead to abdominal fat loss.

At the end of the study they lose an average of 1.1 inches from their waists without intentionally changing their diets or exercise routines.

These medium chain fatty acids are metabolised differently than the longer chain fats, as they’re sent straight to the liver from the digestive tract where they’re either used for energy right away or turned into ketone bodies.

And it’s these medium chain fatty acids in coconut oil which have been shown to reduce appetite, making people eat less without trying.

When it comes to the best diet to follow to get rid of visceral fat, experts recommend a low-carb diet.

Many studies have shown low-carb diets are more effective at reducing visceral fat than low-fat diets.

An eight-week study including 69 overweight men and women found participants who followed a low-carb diet lost 10 per cent more visceral fat and 4.4 per cent more total fat than those on a low-fat diet.

The keto diet, also referred to as the ketogenic diet, is a popular low-carb diet which drastically reduces carb intake and replaces it with fat.

This puts the body in a natural metabolic state called ketosis.

A study involving 28 overweight and obese adults found those who followed a ketogenic diet lost more fat, especially visceral fat, than those following a low-fat diet.

The participants did this while eating roughly 300 more calories per day.

Eating fatty fish every week has also been found to help get rid of visceral fat.