Consumers are being tricked into thinking snacks billed as having ‘no added sugar’ are healthier than they are, experts have warned.

Health experts say the term is a ‘con’ and natural sugars, such as fructose, are just as bad for the body in high doses, raising the risk of obesity, as well as type 2 diabetes and heart disease.

MailOnline analysed how much sugar was really in popular energy bars, fruit crisps and protein snacks sold on supermarket shelves.

Despite marketing themselves as having ‘no added sugar’, nine of the most popular products were found to contain high amounts of it.

Nakd’s Lemon Drizzle bar, which is made from the fruit, served up more than four teaspoons (17g) of the sweet stuff in one tiny 35g bar.

Analysis showed it was made up of 51 per cent of sugar. The NHS says any product with more than 22.5 per cent of total sugars per 100g is too much.

Experts say it’s better to get natural sugars from wholefoods such as fruit, rather than products with other additives.

The NHS does not say people should cut back on natural sugars, but it warns that all sugar is bad in high doses. 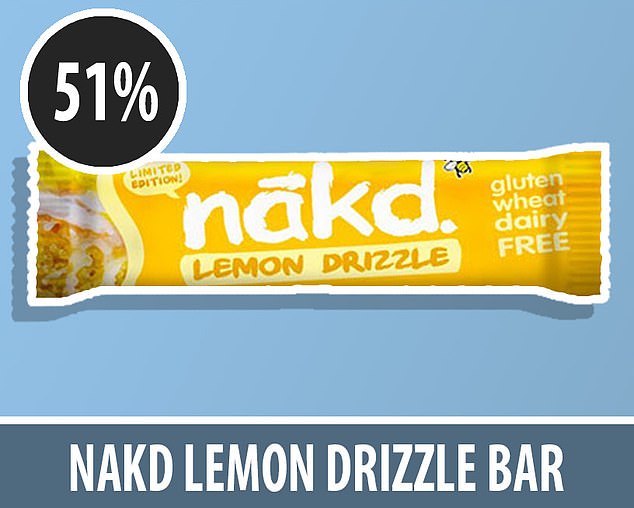 Nakd’s Lemon Drizzle bar, which brags about having ‘no added sugar’, was made up of 51 per cent of sugar. It served up four teaspoons (17g) of the sweet stuff in one tiny 35g bar 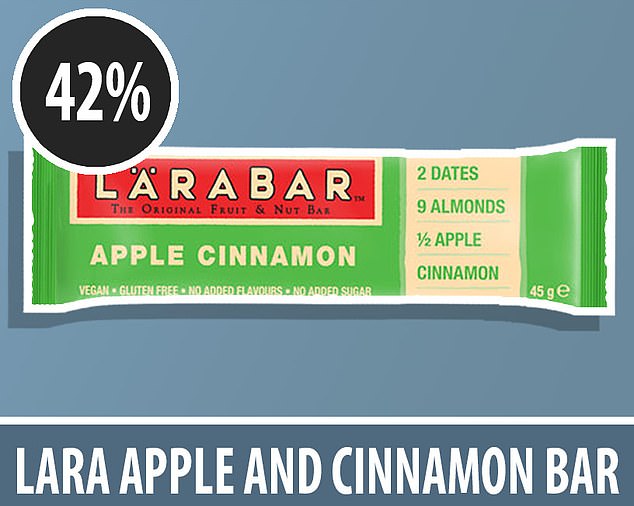 An Apple and Cinnamon Lara Bar, which made the same boast on its packaging, was crammed with 19g of sugar. That means sugar made up almost half of all its ingredients 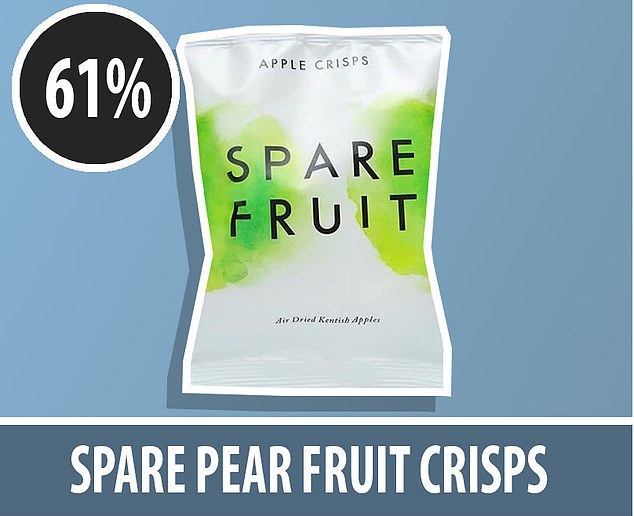 Spare Pear Fruit Crisps, also billed as having ‘no added sugar’, was made up of 61 per cent of the sweet stuff and served 11g of it in each packet

On its website, the health service says people should ‘be aware that natural sugars are included along with free sugars in the ‘total sugars’ figure that you’ll see on food labels.’

Dr Aseem Malhotra, a consultant cardiologist and co-founder of Action On Sugar, said: ‘Natural sugars is a marketing ploy.

‘The maximum daily intake should be no more than six teaspoons of sugar a day – regardless of whether they are natural or free sugars.

‘They both have the same effect on increasing heart disease risk if consumed in high concentration.’

All sugar is made up of glucose or fructose molecules and act on the body in the same way.

Some sugars, for example dates or coconut sugar, contain small amounts of nutrients such as calcium, iron or fibre.

But sugar is not considered a useful source of these. To get them in any significant quantity, you would have to consume an unhealthy amount.

An Apple and Cinnamon Lara Bar, which was advertised as having ‘no added sugar’, was crammed with 19g of it.

That means sugar made up almost half (42 per cent) of all its ingredients.

The term ‘no added sugar’ doesn’t actually reveal anything about how much of the white stuff is in something – as it may still contain a huge amount from fruit.

The claim is that these ‘health’ snacks are better for us because they are made up of ‘natural sugars’ as opposed to free sugars.

MailOnline also found that Spare Pear Fruit Crisps – an air-dried fruit snack – were 61 per cent sugar and contained almost three teaspoons (11g) of it in each packet. 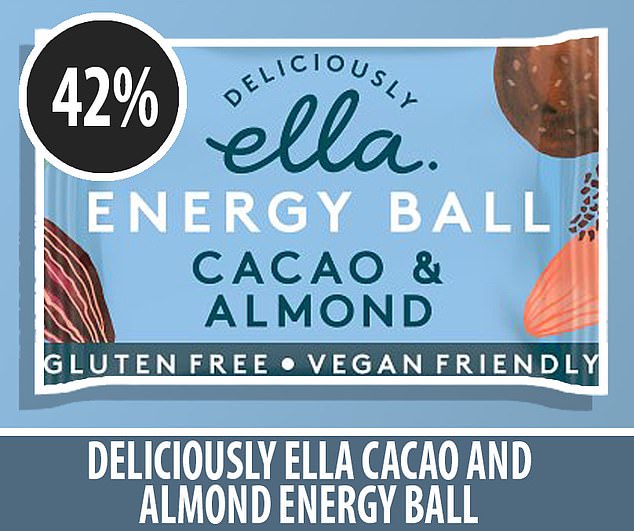 A Deliciously Ella Cacao and Almond Energy Ball is made up of 42 per cent of sugar, which works out at 16.7g, or more than four teaspoons 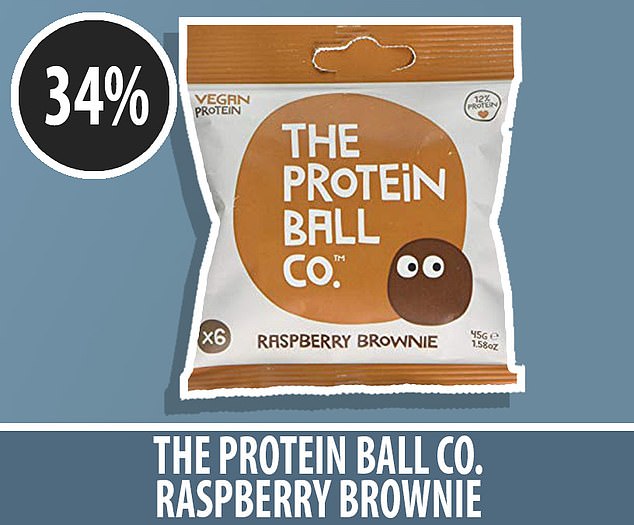 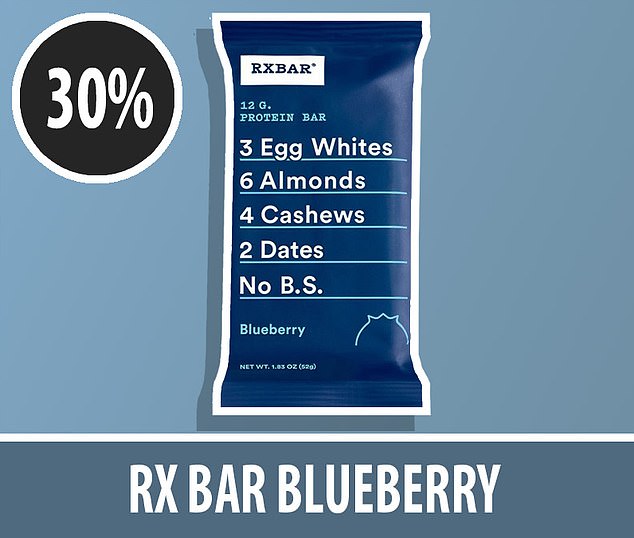 And a Wild Trail Carrot Cake Fruit Bar was more than two-thirds sugar (37 per cent).

This website also found The Protein Ball Company’s Raspberry Brownie was loaded with 15g, nearly four teaspoons, of sugar in one pack of six balls.

An RX Blueberry Protein Bar – popular on Amazon – was crammed with 15g of sugar which made up 30 per cent of its ingredients.

Dr Abbi Lulsegged, a consultant physician who specialises in diabetes, said: ‘Out of all the major food groups, sugars get absorbed quicker into the blood stream than protein and fats.

‘This rapid arrival of sugar into the blood stream can potentially cause too much insulin, the hormone that reduces blood sugars and prevents diabetes, to be released.

‘This can cause a precipitous drop in blood sugar levels – a condition called reactive hypoglycaemia.

HOW MUCH SUGAR IS TOO MUCH?

The amount of sugar a person should eat in a day depends on how old they are.

Children aged four to six years old should be limited to a maximum of 19g per day.

Seven to 10-year-olds should have no more than 24g, and children aged 11 and over should have 30g or less.

Meanwhile the NHS recommends adults have no more than 30g of free sugars a day.

Popular snacks contain a surprising amount of sugar and even a single can of Coca Cola (35g of sugar) or one Mars bar (33g) contains more than the maximum amount of sugar a child should have over a whole day.

A bowl of Frosties contains 24g of sugar, meaning a 10-year-old who has Frosties for breakfast has probably reached their limit for the day before they even leave the house.

Children who eat too much sugar risk damaging their teeth, putting on fat and becoming overweight, and getting type 2 diabetes which increases the risk of heart disease and cancer.

‘The symptoms are transient but for some can be debilitating and for others, they might not perceive a major issue because they have something to snack on regularly to assuage the symptoms.’

A Which? investigation last month found sugar was also being increasingly hidden behind innocuous-sounding aliases, making it harder to spot and avoid.

Other forms of sugar were listed as hydrolysed starch, dextrose – a sugar produced from corn – and levulos, essentially another name for fructose.

These are often found in foods that may be perceived as healthier options, such as protein balls or energy bars.

Some of these sugars may slightly differ in their nutrient make-up, colour or taste.

But it doesn’t matter if the label says nectar or syrup, refined or unrefined, brown or white – they all pose the same risks to the body if consumed in high doses.

Tam Fry, chair of the National Obesity Forum said: ‘The way in which the food industry is allowed to mislead its customers is almost indictable.

‘Three years ago Theresa May promised in her “world-leading” childhood obesity plan that package labelling would be cleaned up when we left the EU so, theoretically, someone in Whitehall should have been tasked to prepare for the event.

‘It’s a good guess however that no-one was, so “no added sugar” labels could have a field day for the foreseeable future.

‘It’s a disgrace that government will continue to allow sugar content to be masked in this way.’

Robin Williams, founder of Wild Trail, said: ‘Wild Trail’s brand and marketing campaigns are aimed towards people who enjoy exercising in the outdoors and need a convenient but healthy energy boost on-the-go.

‘Our products are snack bars designed around five simple ingredients with no added sugars or additives.

‘The sugars in our bars are naturally occurring, which along with wholegrain oats and peanuts that are naturally high in fibre and low in saturated fat provide an ideal balance.

‘The natural sugars in the fruit provide energy where needed whilst the natural high fibre ingredients such as peanuts and oats are digested at a slow pace, providing slow release energy that at the same time can help to reduce hunger.’

‘On average a fresh Pear has around 17g of sugar in it, our bags (one to two pears on average) typically have much less (11 to 13g).

‘The ratio of sugar is higher than fresh Pears as fresh fruit is often 80 per cent water, which we remove in the air-drying process.

‘So while focusing on the sugar may not make it seem the healthiest snack, they are high in fibre (one of your five a day) and we certainly don’t add any sugar.

‘We also pride ourselves on being a naturally sweet/100 per cent fruit alternative to cakes, sweet or biscuits.

‘We also offset the sugar content by air-drying and not frying in oil (and certainly not palm oil like other fruit crisps) and of course do our bit to help tackle and raise awareness of food waste.’

An RXBAR spokesperson said: ‘We’re aware dates contain naturally-occurring sugar, and they’re a core ingredient in RXBARs for a reason.

‘They contain fiber, vitamins and minerals – not comparable to four teaspoons of added sugar.

‘The bottom line is RXBAR doesn’t add processed or manufactured sugars to our products, and our customers appreciate real food ingredients.’