Women who receive just one dose of the HPV vaccine may be as protected against the virus as those who receive the recommended two to three doses, a new study suggests.

Researchers found that certain HPV infections were ‘significantly less prevalent’ among those who received one, two or three doses of the vaccine compared to no doses.

What’s more, fewer women who were incoluated with one dose were later infected compared to women who had two doses.

The team, from the University of Texas Health School of Public Health, says the findings could encourage more women to receive the jab and, in turn, help drive down rates of cancers that the virus is linked to. 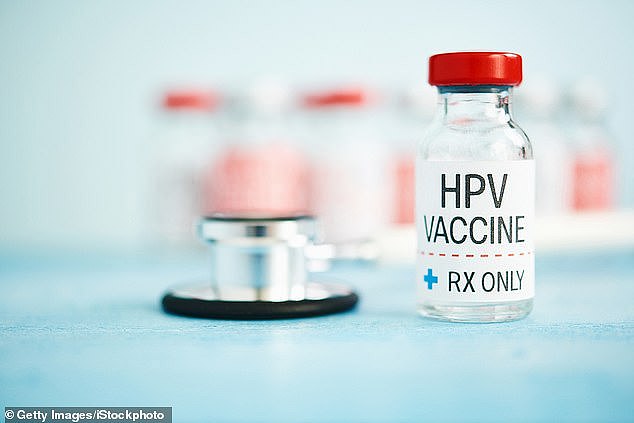 HPV, short for Human papillomavirus, is the most common sexually transmitted infection in the US, affecting around 79 million people.

It has been linked to numerous cancers – including prostate, throat, head and neck, rectum and cervical cancer.

Since the HPV vaccine was introduced in 2006, at least 79 countries and territories have implemented a publicly funded national HPV vaccination program.

In the US, the vaccine is offered in two or three doses over the course of six months to girls who are between ages 11 and 12, with a catch-up series recommended no later than age 26.

The Centers for Disease Control and Prevention (CDC) says 34,800 people are diagnosed with cancer linked to HPV every year.

For the study, published in JAMA Network Open, the team looked at data from the CDC’s National Health and Nutritional Examination Survey.

HPV types 6 and 11 are low-risk types of HPV, while types 16 and 18 are responsible for about 70 percent of cervical cancers worldwide.

Meanwhile, about 100 had been vaccinated with one dose, 125 had received two doses, and nearly 400 had gotten three.

Four of the one dose women, seven of the two dose women and 14 of the three dose women were diagnosed with the same HPV infections types.

This means that about the same rate of women who received one dose and three doses were infected.

But the rate of infected women who got two doses of the vaccine was nearly double compared to the one dose women.

Only half of all Americans people are vaccinated against HPV, but researchers believe the findings will help drive up immunization rates.

‘If one dose is proven effective in trials, the regimen will be simplified. This will help improve the coverage rate among adolescents…and possibly will also increase the momentum of uptake in the newly approved age group.’