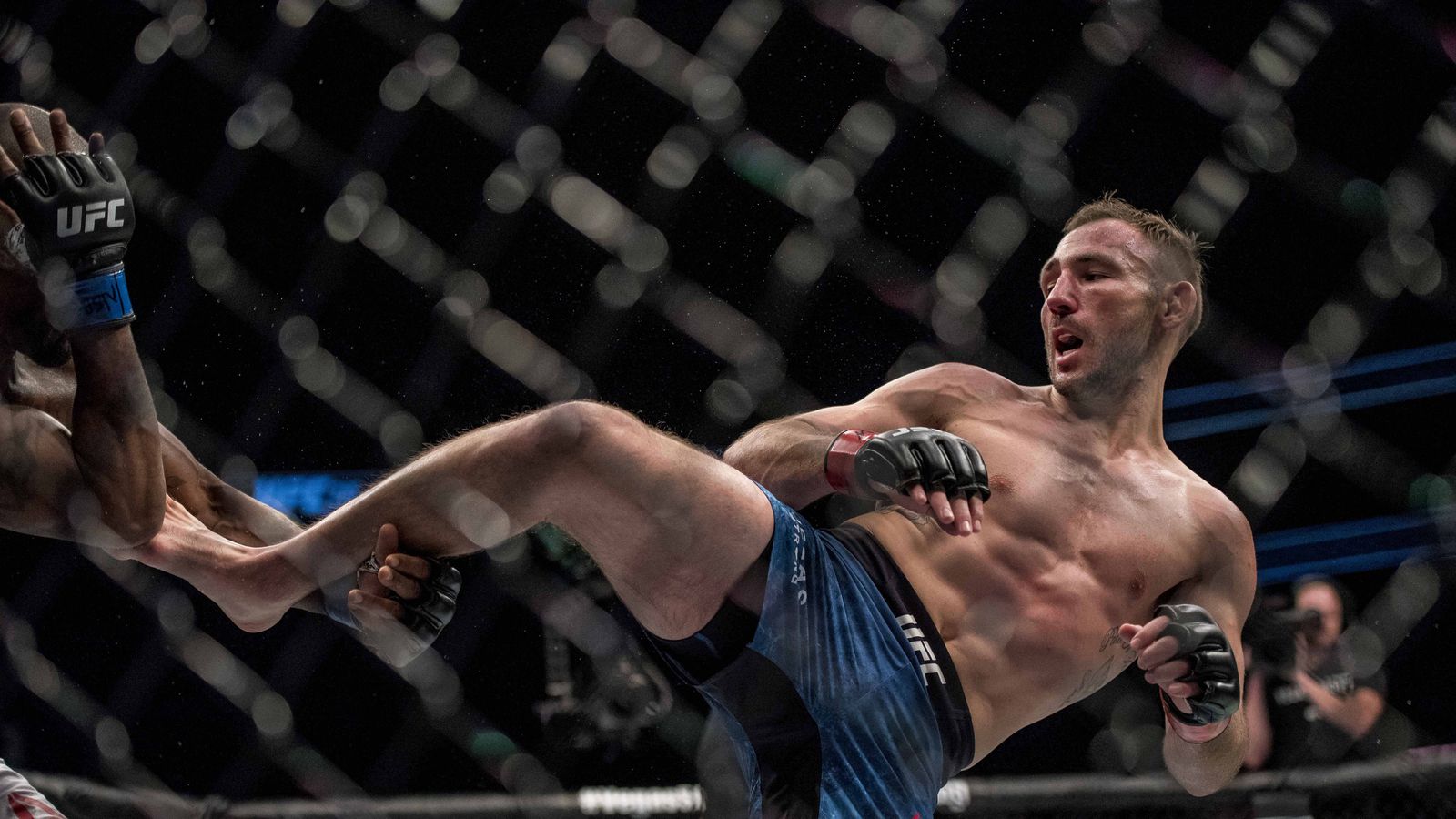 Ultimate Fighting Championship (UFC) has had to scramble a bit, resulting in an unexpected pay-per-view (PPV) main event for UFC 230: The Heavyweight title fight between division champion, Daniel Cormier, taking on hard-hitting challenger, Derrick Lewis, the latter of whom fought just one month ago. Madison Square Garden in New York, N.Y., this Saturday (Nov. 4, 2018) will also host a top-notch Middleweight clash between Chris Weidman and “Jacare” Souza, as well as another that puts submission specialist David Branch against knockout artist Jared Cannonier.

Matt Frevola (6-1) made the most of his headlining spot on the Contender Series by submitting Luke Flores to secure a contract. His customary brawling ways didn’t serve him well in his debut, however, as Polo Reyes demolished him with punches in just 60 seconds.

“The Steamrolla” went undefeated (8-0) as an amateur before making his professional mixed martial arts (MMA) debut in 2014.

The terrific Octagon debut of Lando Vannata (9-3-1) against Tony Ferguson and subsequent wheel kick knockout of John Makdessi have not given way to the expected success. “Groovy” is just 0-2-1 in his last three Octagon appearances, most recently losing a one-sided decision to Drakkar Klose in July.

He owns four wins apiece by knockout and submission.

It’s become clear that Vannata isn’t what we though he was, but he’s almost certainly a level or two above Frevola. The latter is a bog-standard brawler with solid wrestling to back it up, which is an archetype Vannata really ought to be able to deal with. As long as he doesn’t horribly mismanage his cardio, Vannata should be able to style on Frevola all night.

It’s hard to have faith in Vannata at this point, but Frevola is a far cry from the likes of David Teymur and Bobby Green. Head movement, strong kicks and good takedown defense carry “Groovy” back into the win column.

Shane Burgos (10-1) announced his arrival in UFC’s Featherweight division with entertaining victories over Tiago “Trator,” Charles Rosa and Godofredo “Pepey.” He would fall to Calvin Kattar his next time out, but secured “Fight of the Night” for their back-and-forth battle.

His eight stoppage wins are split evenly between knockouts and submissions.

Kurt Holobaugh (17-5) battered Matt Bessette on the inaugural “Contender Series” episode, only for the fight to be overturned when it was revealed that he used an IV to rehydrate. Despite this, he made his Octagon a year later with a “Fight of the Night”-winning brawl against Raoni Barcelos, who put away Holobaugh with uppercuts in the third round.

Though their heights are identical, he will give up two inches of reach to “Hurricane” Shane.

Holobaugh showed in his last fight that his pressure-heavy style struggles against strong counter-punchers willing to stand their ground, so in response, UFC booked him against another strong counter-puncher willing to stand his ground. Burgos has virtually all the tools needed to recreate Barcelos’ effort aside from strong offensive wrestling, and what he lacks in slick head movement he makes up for with concussive power.

The “X-Factor” here is whether Burgos, whose hands-low slugging demands extreme confidence, has mentally recovered from the Kattar knockout. He’s young enough to bounce back strong, though, so I say we get about a round and a half of “Fight of the Night” action before Burgos catches him with something gnarly.

Wrestling, aggression and sheer grit carried Brian Kelleher (19-9) past Damian Stasiak and Renan Barao on his way to contendership. Those weren’t enough against John Lineker, who out-brawled Kelleher before knocking him stiff with a left hook.

“Boom” has five wins by guillotine, including one over fellow undercard fighter Julio Arce.

Montel Jackson (6-1) — whose “Contender Series” victory was marred by a series of fouls — got the UFC call anyway when Benito Lopez pulled out of a fight with Ricky Simon. Though he put forth a strong effort, he couldn’t overcome his foe on short notice and suffered his first career loss by decision.

He steps in for “Contender Series” product Domingo Pilarte on less than one month’s notice.

Jackson is still somewhat green and came up short against Simon, but even on short notice, this is a much more winnable fight for him. He’s four inches taller than Kelleher and will have nearly a foot of reach on him; however, Kelleher gets inside through sheer tenacity, which just isn’t going to work against someone this rangy and hits this hard.

Kelleher’s only real chances of victory lie in Jackson gassing late or going for a takedown and leaving his neck out. Neither seems likely. Jackson plugs him with power shots at range to take a clear decision victory.

Poland’s Adam Wieczorek (10-1), who has not tasted defeat since a loss to Marcin Tybura in his second professional fight, enters the cage undefeated (2-0) in his Octagon career so far. His last victory was one for the history books, as he hit the UFC Heavyweight division’s first omoplata against the heavily favored Arjan Singh Bhullar in Glendale.

He replaces the injured Ruslan Magomedov, who ran into visa issues, on less than two weeks’ notice.

Marcos Rogerio de Lima (15-5) opened his UFC career with two knockouts in a combined 2:19, but has alternated losses and victories since. “Pezao” was last seen tapping to an Ovince Saint Preux von Flue choke after missing weight for the second consecutive time, after which he ran afoul of United States Anti-Doping Agency (USADA).

The Brazilian has stopped 12 opponents with punches, 10 of them in the first round.

de Lima is an inordinately frustrating fighter to follow. He has truly ridiculous punching power, but his ground game has failed to improve by even the slightest amount since his Octagon debut. “Pezao’s” takedown defense is atrocious and his defensive grappling is downright appalling; indeed, if the fight hits the mat under any circumstances, “Siwy” will tap him in a hurry.

Considering that the Pole will be one of the larger men de Lima has faced, getting the fight there may not be too difficult. The Brazilian isn’t a true heavyweight; he’s a light heavyweight with no discipline. Though the potential for another stunning knockout is there, Wieczorek survives a rough start to ultimately drag his foe to the mat and lock up a submission shortly thereafter.

Four more UFC 230 “Prelims” undercard bouts to preview and predict on FOX Sports 1, including a rematch from The Ultimate Fighter (TUF) and the latest from all-action Jason Knight. Same time tomorrow as always, Maniacs!

Remember that MMAmania.com will deliver LIVE round-by-round, blow-by-blow coverage of the entire UFC 230 fight card, starting with the Fight Pass “Prelims” matches online, which are scheduled to begin at 6:15 p.m. ET, then the remaining undercard balance on FOX Sports 1 at 8 p.m. ET, before the PPV main card start time at 10 p.m. ET.