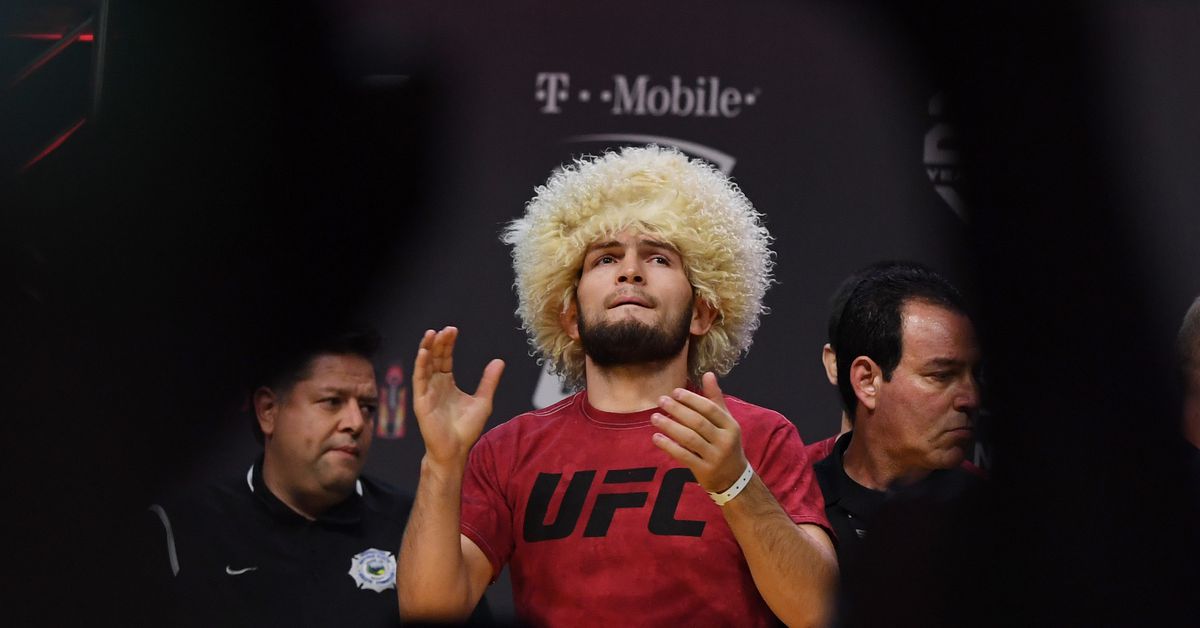 Khabib’s dad has still got it. Despite Nurmagomedov being possibly the most overwhelming and effective wrestler in the Octagon today, his father, who is also his coach, can still not only hold his own but even push his son around when they tie up.

Abdulmap Nurmagomedov is 56 years old. He has coached Khabib since Khabib was old enough to walk. One of the most distinctive things about the Dagestani lightweight champion is his relationship with his father. The elder Nurmagomedov is a lifelong wrestler and combat sambo practitioner. He is presumably responsible for that early footage of Khabib wrestling bears, and for his success in the Octagon, where Khabib is still undefeated.

It is also clear that the student has not yet become the master.

Conor McGregor enjoys passing his legacy to his son

Mike Perry is the only UFC fighter I know who will post this much sparring footage of himself.

It took me a couple times to see what this guy tapped to, because of how awkward this submission is. That’s another reason to always wear a cup.

We all remember that Valentina Shevchenko video people thought was sped up, right? I have the same questions about this one. It’s still cool choreography, though.

I don’t know what the rubber guard name for this choke is, and apparently neither did Barnes.

Israel Adesanya, the Stylebender, invokes the God of Iron, and I gotta admit I’m loving the aesthetic of his visit to his native Nigeria.

You keep expecting him to do a technique that could actually do damage and it never happens.

Look at the length on this caption from Conor McGregor’s old movement coach.

Shoulder Touch Game with ‘dog on a leash’ variant. One person is stationary and one mobile – in this case Odelia is ‘on the leash’ and can’t move in space while I can move freely in and out but mostly in front of her. You need to touch each other deltoids without getting yours touched. This little game will teach you a lot about how an athlete, fighter, mover organizes his/her body, mobilizes through footwork and combines dynamic posturing, rhythmical sensation and relaxation/contraction in accurate dosages and timings along various kinetic chains. You can benefit from both rolls and use it for testing and diagnosing but also developing and tying together various movement aspects. I’ve had the chance to play such games with many elite level sports people, ball players, fighters and martial artists. It’s very revealing…. In very short while you realize who is working with cooperative scenarios (many ‘impressive’ martial artists who specialize on demos) where one is used to demonstrating speed and power in optimized settings and who is working in chaos and is hence adaptable, rhythmical and efficient organizer of body in space and time. At other times even elite fighters can have issues with such work because of certain habits of relying too much on auxiliary systems not present in this game – like blocking with the hands incoming shots or simply being tough and taking two on the chin to get one back instead of managing distance well. First rule of defense: ‘don’t be there’! Needless to say it’s not going to make you a fighter if you get better at this game but it will definitely contribute a meaningful chunk for someone who is already fight training. It’s a simple and yet very difficult task to work through – not just for fighters. I use dozens and dozens of variants of dozens and dozens of different games to develop and test athletes but also common people. To study the subject of tactical play in depth, join us in one of our events across Europe this summer – we will soon be in Finland, London, Lithuania, Warsaw, Stockholm, Dublin, Vienna, Moscow, Barcelona, Lisbon and more – please follow link in profile to register and join us. #movementculture #id

That right hand just landed over and over

This picture, of a line on Mount Everest, is insane to me. I can’t wrap my mind around climbing like this. Houston traffic is bad enough.

Utterly terrifying. Andrew Richardson, the Heir Apparent to Midnight Mania, sent me this. I watched it over and over.

This also applies to the Mania comments section

Video! This Rogan Endorsement Has Bernie Sanders In Hot…

Fitness tips: how to begin with online yoga