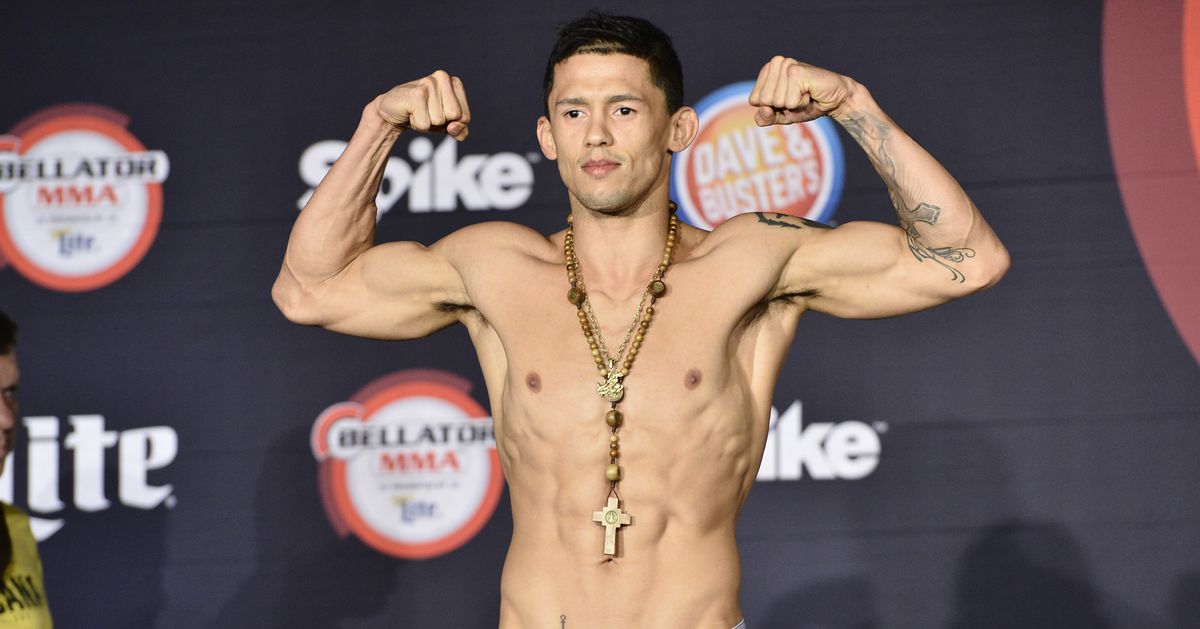 Bellator 222: “MacDonald vs. Gracie” takes place at Madison Square Garden in New York, N.Y., this weekend (Fri., June 14, 2019), streaming exclusively on DAZN. Headlining at the historic Garden are Welterweight champion Rory MacDonald (20-5-1) and undefeated Brazilian jiu-jitsu wizard Neiman Gracie (9-0), as each attempts to advance to the finals of the Welterweight Grand Prix.

Earlier in the night, former Bantamweight champion Eduardo Dantas (21-6) will move up to Featherweight for a bout against rising star Juan Archuleta (22-1). “The Spaniard” Archuleta has won 17 straight fights dating back to 2015, including besting Ricky Bandejas in January, the same man who once knocked off an undefeated James Gallagher. “Dudu” Dantas has, therefore, set himself up a double challenge in this fight. Not only must Dantas make a successful transition to 145 pounds, but he also has to become the first fighter to figure out how to beat “The Spaniard” in the last four years.

Dantas recently spoke with MMAmania.com about this intriguing fight at The Garden and what’s next for him with a win. Full disclosure: owing to time and availability, this interview was done via translated e-mails.

Eduardo, you were successful in your last fight at 135 pounds against Toby Misech at Bellator 215. What prompted the decision to move up to 145 pounds for this fight?

“I got a call from Bellator a month before this fight card that helped me (make the decision). It is a great opportunity, and I love to meet opportunities with preparation. My time has come.”

Archuleta is on a 17-fight win streak. Did you expect such a difficult opponent for your first fight in the weight class when you took it on short notice?

“I do not see it that way, I see it as a great opportunity to get me to the belt.”

Speaking of the belt, fellow Brazilian fighter Patricio “Pitbull” Freire is the Featherweight and Lightweight champion. What do you think of him winning and holding both belts?

“Pitbull is a beast! This is his moment. I love this guy. I also know that sooner or later, we will meet.”

If you do get an opportunity to meet him down the line, where would you prefer a world title fight of that magnitude to take place?

“Rio de Janeiro would be ideal for Bellator to (hold the fight and) enter with everything (they do) in Brazil.”

Darrion Caldwell also wants to fight “Pitbull,” but he currently holds the title he took from you. How do you feel about him at this time?

“I’m going to get the Bantamweight title again.”

So you have aspirations to be a dual-weight champion yourself. What about A.J. McKee, though? He also seems to be in line for Freire.

“He is a great opponent, he can also play (for) the title. It (his ranking) comes from great victories.”

What is your estimation of Juan “The Spaniard” Archuleta leading into Friday’s fight?

“Juan is a very tough athlete and plays with the rules under his arm. I have everything in my favor, reach, height, I’m faster. Where the fight is, I will be dominating.”

Speaking of speed, you were well known for your lightning quick feet and hands as a Bantamweight champion. Are you afraid you’ll lose a step going up in weight?

“I’m (even) faster at Featherweight — the fans (should) get excited.”

What about your current contract? Should those fans expect you to be around or will you shop yourself to other organizations?

“(I have) maybe nine months (left). It’s always good to negotiate with Bellator.”

Does that mean we can expect you to enter the $1 million Featherweight tournament for Bellator this fall?

“I’m going to win this fight (with Archuleta), but I’m not thinking about this tournament.”

Fair enough. How do you feel about fighting at a great venue like Madison Square Garden?

“(I’m) very happy. Dude, I came from the favela in Rio de Janeiro, and being in Madison Square Garden (now) motivates me. June 14th is my night. Do not blink.”

Finally, any thoughts on sharing the card with a Brazilian legend like Lyoto Machida?

“Lyoto is a great athlete. I’m very grateful to be on the card.”

Thank you Mr. Dantas and have a great fight with Juan Archuleta on Friday!