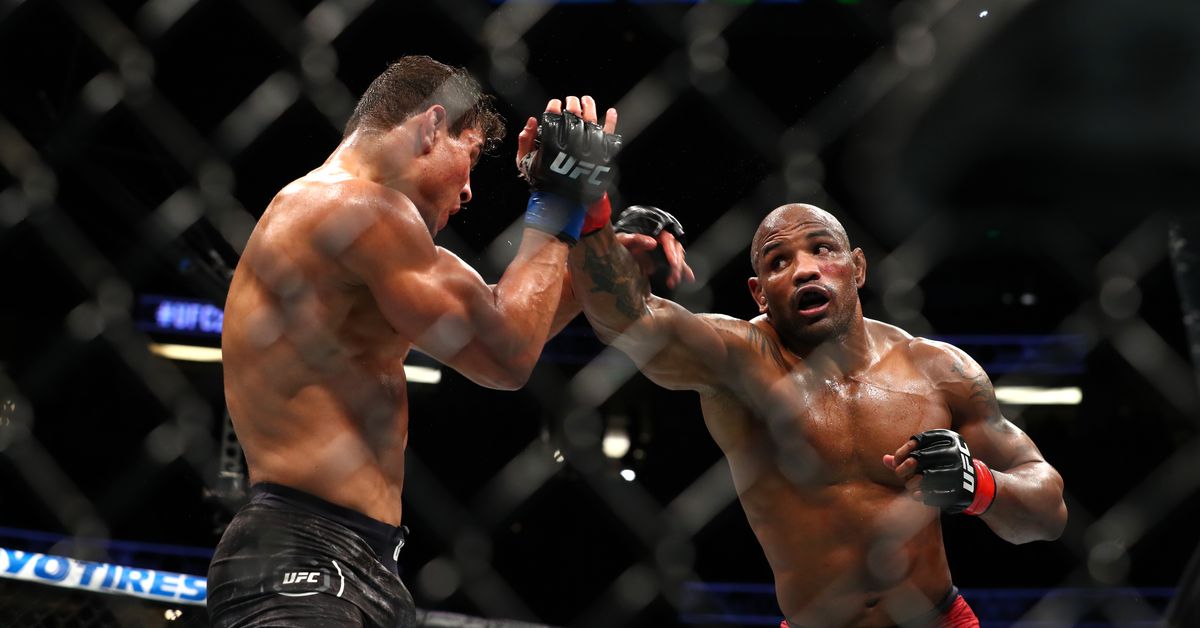 Paulo Costa and Yoel Romero’s bout at UFC 241 this past Saturday was one for the ages. The “Fight of the Night” worthy brawl saw both muscle men land monstrous shots, but neither went down, resulting in a close decision win for Costa after 15 minutes of combat.

As is often the case with Yoel Romero bouts, there is controversy afterward. Post-fight, Costa accused Romero of utilizing ‘dirty’ tactics. Let’s break down his pair of accusations (transcription courtesy of MMAFighting):

“He’s a nice guy, but he’s dirty. In the first round, when I make a hook in his face, he went down then got up very quickly, and I say man I will knock him out in the first round because he feel my punch, my first punch, and I started hunting him in the octagon. And when I close to knock him out, he point on something, anywhere, I don’t know. Like look there Paulo, and I lose concentration, because he point something, maybe his mouth piece fall.”

On this instance, I have little sympathy for “The Eraser.” The rules say to “protect yourself at all times,” and it’s a fighter’s job to remain focused despite any potential distractions. His second point may carry more weight, however:

“The second thing, my knee not hit his balls. My knee hit his stomach, and he said, ‘Oh, you hit my balls,’ and he jumped back, and the referee (said) stop, stop. I don’t know him deep, but he’s a nice guy, he looks like a nice guy, but his kind of fight is not clean.

In this case, it was really hard to tell from the replay video. The knee potentially clipped the cup on the way up to the stomach, but much of the force seemed to land to the mid-section. In all likelihood, Romero’s drop to the mat afterward was likely a bit of a show to draw a rest period.

Costa should really consider himself lucky, as this is all pretty mild considering Romero’s history. The Cuban is a master of gamesmanship: the art of pushing the line and excelling in grey areas of the rules and spot. Some might call that cheating. Either way, Romero’s use of a tactical cage grab (against “Jacare” Souza) or adding excessive Vaseline between rounds to buy more time (against Tim Kennedy) were far more obvious and fight-altering moments.

Still, none of Romero’s gamesmanship has cost him in any way. If you’re not cheating, you’re not trying!

This applies to mothers as well (hi Mom!).

Ladies who are getting into mma with their significant other. Do not (I REPEAT) DO NOT SCREAM like a wild cat ! People can hear you on TV.

I haven’t yet decided if this is the worst or best promo I’ve ever seen?

Cool fight art will always have a place on Midnight Mania.

Watching Saenchai move around is always fun, and the second pic is perfectly timed!

The fence is a bad place to take a break…

This is the textbook definition of “right on the button.”

Midnight Music: It’s easy and understandable to write-off modern country music as a pop garbage. For the most part, that’s correct — much of what comes out of Nashville these days is hip-hop stripped of all the interesting aspects and aimed at white people afraid of black music. Sturgill Simpson, however, is a fantastic country singer-songwriter soon to release another album. Accordingly, I re-listened to his excellent 2016 LP A Sailor’s Guide to Earth.

Deontay Wilder says bleeding ear did not affect him in Tyson…