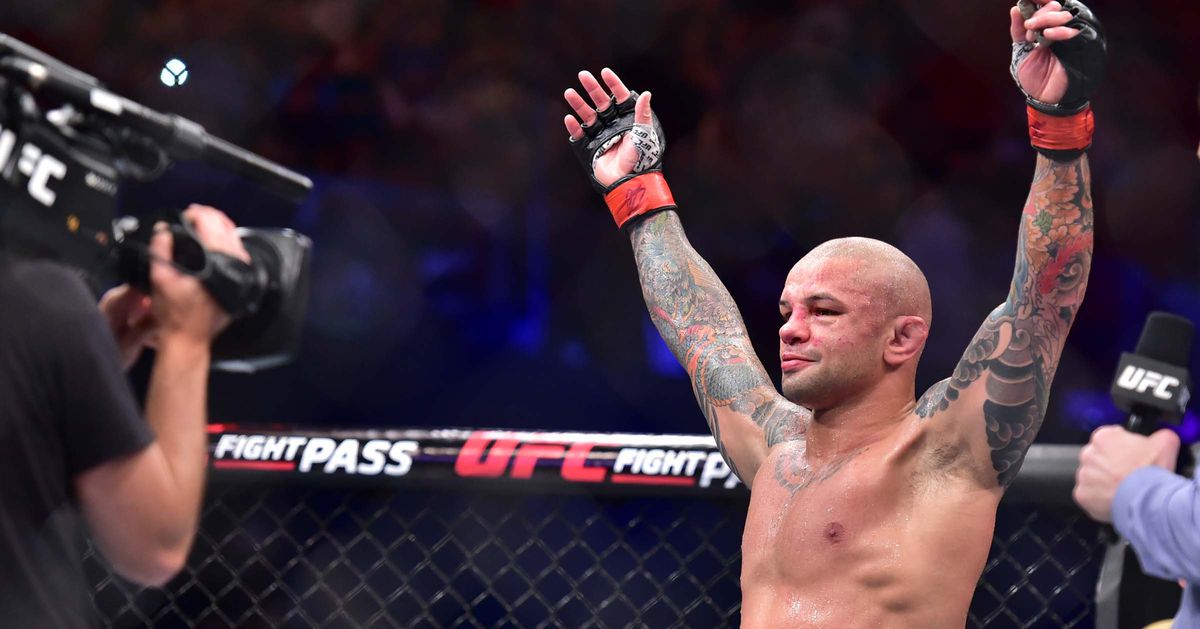 One of the Heavyweight division’s rising action stars will look to force viewers to remember his name this Saturday (Dec. 7, 2019) when Jairzinho Rozenstruik steps up on short notice against the venerable Alistair Overeem. Capital One Arena in Washington, D.C., will also host a pivotal women’s Strawweight clash between Marina Rodriguez and Cynthia Calvillo, as well as a dynamite Bantamweight battle pitting prospects Cody Stamman and Song Yadong against each other.

Four “Prelims” undercard bouts join UFC on ESPN 7’s main card (check out the ESPN+ batch here). So let’s see what the Worldwide Leader in Sports has to offer this weekend:

The former scourge of the Welterweight division, Thiago Alves (23-14), now finds himself just 2-5 in his last seven fights, only one of those two wins coming without controversy. His current 1-3 skid includes a bogus decision victory over Max Griffin and, most recently, a loss to Argentine brawler Laureano Staropoli in Rio de Janeiro.

He’ll give up five inches of height and reach to “The Dirty Bird.”

Tim Means (28-11-1) has had his own string of recent rough luck, including a narrow decision loss to Belal Muhammad and a robbery decision loss to Sergio Moraes soon after. He got back on track with a 78-second demolition of Ricky Rainey and looked dominant against Niko Price his next time out, but ran headlong into a right hand for a stunning knockout defeat.

Nineteen of his professional wins have come by form of knockout.

There was a time when Alves could have run roughshod over Means. In fact, after “The Pitbull’s” second loss to Jon Fitch, he developed a remarkably effective wrestling attack to compensate for the decline of his destructive striking. Unfortunately, we haven’t seen him really commit or succeed with his takedowns in a while, and without them, he’s at the mercy of a taller, rangier and more polished striker.

There is the question mark of how Means deals with the first true knockout loss of his career, of course. Alves is still game enough to eke out a decision if “The Dirty Bird” comes out gun shy. While that’s a legitimate possibility, odds are Means picks apart Alves behind his jab for a comfortable win.

Billy Quarantillo (12-2) knocked out Brandon Ricetti in the opening round of The Ultimate Fighter (TUF) 22 to earn a spot on Team Uriah Faber, but ran into eventual finalist Saul Rogers in the Round of 16. A 5-1 run brought him to “Contender Series,” where he knocked out the favored Kamuela Kirk to earn a contract in July.

He sports two-inch advantages in both height and reach.

Jacob Kilburn (8-2) came up short in his 2018 “Contender Series” bid, tapping to grappling specialist Bobby Moffett early in the second round. After almost one year on the sidelines, he picked up a pair of quick knockouts under the Island Fight banner to extend his run to 5-1.

Quarantillo was in for a whoopin’ against Fishgold, who would have had a field day with the former’s shoddy takedown defense. In Kilburn, he gets a far more willing striker with the same mix of wild aggression, fancy kicks and porous defense that are Quarantillo’s calling cards. This is a sleeper pick for “Fight of the Night” and figures to be an insane brawl while it lasts.

The key difference between the two is their respective motors. Kilburn lost a chunk of his dynamism after 1.5 rounds of mayhem with Elvin Brito, while Quarantillo seemingly gets stronger as the minutes go by. Unless Kilburn catches Quarantillo with that spinning back fist he’s fond of, Quarantillo beats his fading foe into submission sometime in the third.

Bryce Mitchell (11-0) — Daniel Cormier’s second pick on TUF 27 — battled his way to the Featherweight semifinals before tapping to eventual winner Brad Katona. He has since emerged as one of the show’s most successful alumni, defeating No. 1 pick Tyler Diamond at the Finale and “Contender Series” vet Bobby Moffett soon after.

He’ll have three inches of height and two inches of reach on “Robo.”

Matt Sayles (8-2) put a controversial loss to George Hickman behind him with a destructive performance on “Contender Series,” nabbing himself a contract at the expense of undefeated Yazan Hajeh. Though his debut against Sheymon Moraes didn’t go as planned, he got in the UFC win column last May by choking out Kyle Nelson.

He has scored six (technical) knockouts as a professional, five of them in the first round.

Sayles is a quality prospect with huge power, but the Nelson fight revealed some lingering wrestling issues that could become very problematic very quickly. Mitchell is big, relentless and durable enough to take Sayles’ best punch and drag him into an uncomfortable grappling battle.

If Sayles has the prospect chops I thought he did, he might have enough oomph in his right hand to break even a tank like Mitchell. Considering the way he was essentially saved by Nelson fading down the stretch, though, that’s not a possibility to have faith in. Mitchell walks through some serious fire to wrangle Sayles to the mat and take over from there.

It’s been 13 years since Matt Wiman’s (16-8) infamous Octagon debut against Spencer Fisher, but the “Handsome” one is still trucking at the age of 36. In more recent news, a 2014 decision loss to Isaac Valle-Flagg gave way to a 4.5-year layoff, which ended in June when Luis Pena pounded him out.

Though the taller of the two, he’ll give up 3.5 inches of reach.

A strong run in promotions like Cage Fury and Ring of Honor led to Joe Solecki (8-2) joining the latest season of “Contender Series” in July. Solecki, who’d gotten his first decision victory one fight prior, got back to his finishing ways with a first-round submission of James Wallace.

He has submitted six professional opponents and knocked out one other.

The Matt Wiman of the early ‘10s probably had the goods to maul Solecki. Between his wrestling and submission defense, “Handsome” probably would have torn him up from top position like he did Cole Miller. The current Matt Wiman, however, got comprehensively demolished in the wrestling by Pena, who is a far lesser takedown artist than Solecki. Nothing from that most recent effort suggests he can keep Solecki from taking him down, moving to the back, and hunting rear-naked chokes with impunity.

The one thing Wiman has going for him is that Solecki isn’t much of a ground-and-pounder, so he won’t take anywhere near the beating he did against “Violent Bob Ross.” His airtight jiu-jitsu won’t be enough to save him from long stretches of control, though. Solecki plays backpack for 15 dominant minutes.

Remember that MMAmania.com will deliver LIVE round-by-round, blow-by-blow coverage of the entire UFC on ESPN 7 fight card this weekend, starting with the ESPN+ “Prelims” that are scheduled to begin at 6 p.m. ET, then remaining undercard portion that will air on ESPN proper at 7 p.m. ET (main card begins at 9 p.m. ET on ESPN).

To check out the latest and greatest UFC on ESPN 7: “Overeem vs. Rozenstruik” news and notes be sure to hit up our comprehensive event archive right here.