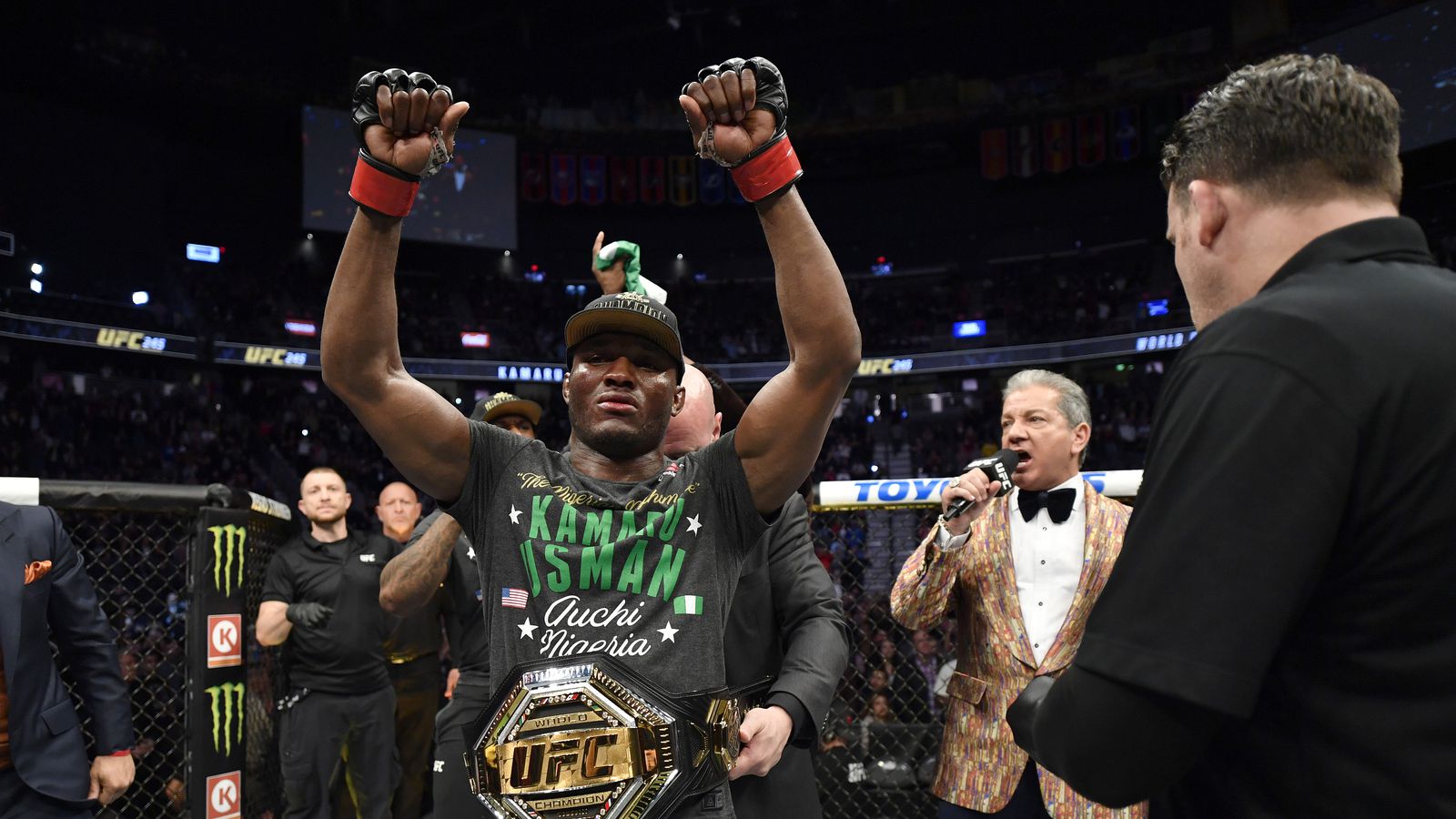 Ultimate Fighting Championship (UFC) was back at it again last night (Sat. Dec. 14, 2019), as UFC 245 went down inside T-Mobile Arena in Las Vegas, Nevada. In the main event, Kamaru Usman and Colby Coviington went to war in a thrilling five-round fight which saw “The Nigerian Nightmare” retain his title by knocking out “Chaos” in the final minute of the fight on ESPN+ PPV (see it).

In the co-headlining act, Alexander Volkanovski stunned Max Holloway after five rounds of action to take his Featherweight title (recap). And in the third title fight, Amanda Nunes retained her Bantamweight strap after a tough five-round bout against Germaine de Randamie (see it).

It wasn’t easy by any stretch of the imagination, but Usman pulled off a late technical knockout (TKO) win over his bitter rival, Colby Covington, to retain his Welterweight title. And it’s a good thing, too, because the way the judges were scoring last night he could’ve been on the verge of losing his strap. Nevertheless, “The Nigerian Nightmare” hung tough and dug very deep to finish a very-game Covington who proved that despite his nauseating schtick, the man can fight and hang with the best of the best. Kamaru moves to 16-1, 11-0 UFC, but more importantly, he has bragging rights over “Chaos.” With Colby behind him, Kamaru can look forward to bigger and better things, including a massive title fight against Jorge Masvidal.

In what was a back-and-forth fight, “The Great” handed Holloway his first loss at 145 pounds in six years. Alex never allowed “Blessed” to implement his game and back him down as he usually does to his foes, staying in the pocket to go strike for strike against the champ. Indeed, Volkanovski was determined to not take any unnecessary steps backwards and proved that the big stage was not going to deter him from reaching his dreams. Volkanovski is now 8-0 inside the Octagon, and the win sets him up for bigger fights — and bigger paydays — moving forward. That said, he did promise Max an instant rematch prior to the fight, so it remains to be seen if he lives up to it. For now, Alex can sit back and enjoy his huge win, which will be celebrated in Australia for days to come.

Let me start off by saying that Colby was game from the jump, taking it too the champion from the opening bell, stunning him on a few occasions and testing his cardio all night. Even when he apparently broke his jaw, Colby still kept going at a tremendous pace. So Covington didn’t earn the “biggest loser” spot for his performance, but more for what he lost. “Chaos” was seemingly neck and neck with Usman on the judges, which means he could have very well been on his way to scoring an upset had he not been finished, making his loss a tougher pill to swallow. Furthermore, he will no longer have the right to carry around a belt with him everywhere he goes. I mean, he can, but I don’t think even “Chaos” would do such a thing after the defeat. And as far as that pay raise he was hoping to get, he can kiss it good bye, for now, as the loss won’t endear him to Dana White and Co., or give him the leverage he was hoping for. But again, this takes absolutely nothing away from his performance, who wasn’t too thrilled with the stoppage afterwards.