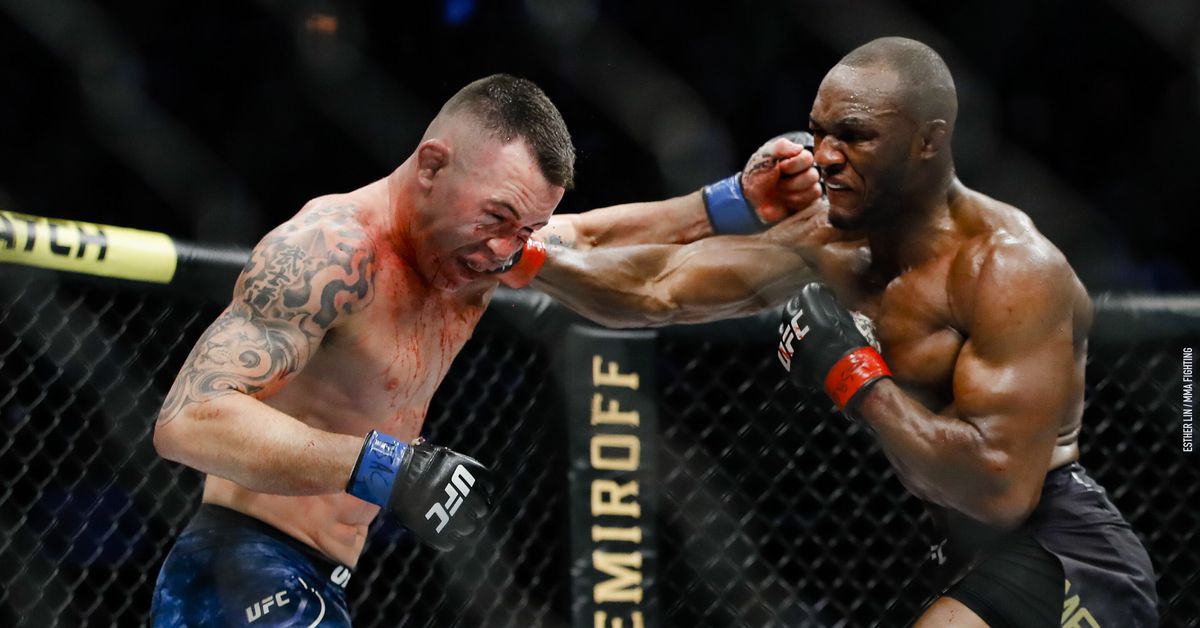 If you told me coming into UFC 245 that Kamaru Usman vs. Colby Covington was going to be the best championship fight on the card, I’d have called you crazy. Yet here we are, at 2:30AM EST, and that is the reality we exist in.

Not only did Usman and Covington out-wow Amanda Nunes and Max Holloway, their fight kept me on the edge of my seat for the entire 25 minutes. And yes, part of that is because we’ve all bought into Colby Covington’s shtick. That’s not to say we actually believe it’s real … just that we now feel one way or another about him enough to be heavily invested in the outcomes of his fight. And boy was I invested in hoping he’d lose.

Kamaru Usman put Colby Covington away with just 50 seconds left in the fifth round after Covington’s self-diagnosed broken jaw finally quit, leaving the MAGA proponent covering up on the canvas until the ref stepped in. A bit early? For a championship fight with less than a minute to go, I’d say yes. But it turns out Colby didn’t get robbed of a decision win by the move: scorecards had the fight 48-46 Usman, 48-46 Covington, 47-47 even coming into the fifth round. And Usman would have won that fifth round. So while I’ll still happily argue the blood and guts position that you don’t stop a close title fight like that, it’s purely academic and doesn’t really affect things here too much.

Unless, of course, your scorecard had Colby Covington clearly in the lead before the referee robbed him of the win. And hey, unlike most people I saw on Twitter following the fight, I’m not even going to call anyone who feels that way delusional. I spent the entire fight in a state of dread thinking ‘Dear God, Colby Covington is winning this thing,’ so maybe I weighed his successes heavier than Usman’s. There must be a number of fans out there like me, and then there’s the actual Covington fans from the tribe of Trump or Pepe or just pro-wrestling. They certainly aren’t going to accept this loss as legitimate. In a world where McGregor Stans can delude themselves about the Khabib loss, Covington’s defeat tonight could be seen as the Montreal Screwjob of MMA.

Or the whole thing could fizzle out until Covington’s next fight, which might be a while based on his potential injuries and fractured relationship with the UFC. And isn’t that the way it always seems to be with Colby? When he and Kamaru Usman were finally booked to fight, everyone braced themselves for the kind of ugly build up that makes you despair the state of the world in 2019. But while things certainly weren’t classy, the fight didn’t rip the UFC’s fanbase apart over political or racial lines. In the end it was just another fight between a heel and a babyface, tale as old as time.

Still, it always feels like Covington is playing with fire, and the more visibility he gets the more likely things are to burn out of control. This goes past all the political stuff (although to be clear as a Canadian I find a lot of that disturbing too). The overall negativity is just too much. Glenn Robinson’s daughters shouldn’t have to ask you to leave their dead father out of your feckless promotion. Maybe don’t make jokes about Matt Hughes’ life being destroyed after his truck was hit by a train? Every fight with Colby tends to generate at least two or three moments that are just so absolutely gross and past any line of decency that they make the sport a darker, meaner place.

Which is too bad, because Covington’s performance at UFC 245 was undeniably impressive, as was his grit pushing through that jaw injury. He earned my begrudging respect halfway through round four, and if it wasn’t for all the endless toxic behavior outside the Octagon, tonight would have made me a fan. But there’s just way too much baggage that comes with him.

I don’t look forward to Colby Covington fights. This fight was great. I’m glad it’s over. And hopefully after this weekend we won’t have to think about him again for a long while.