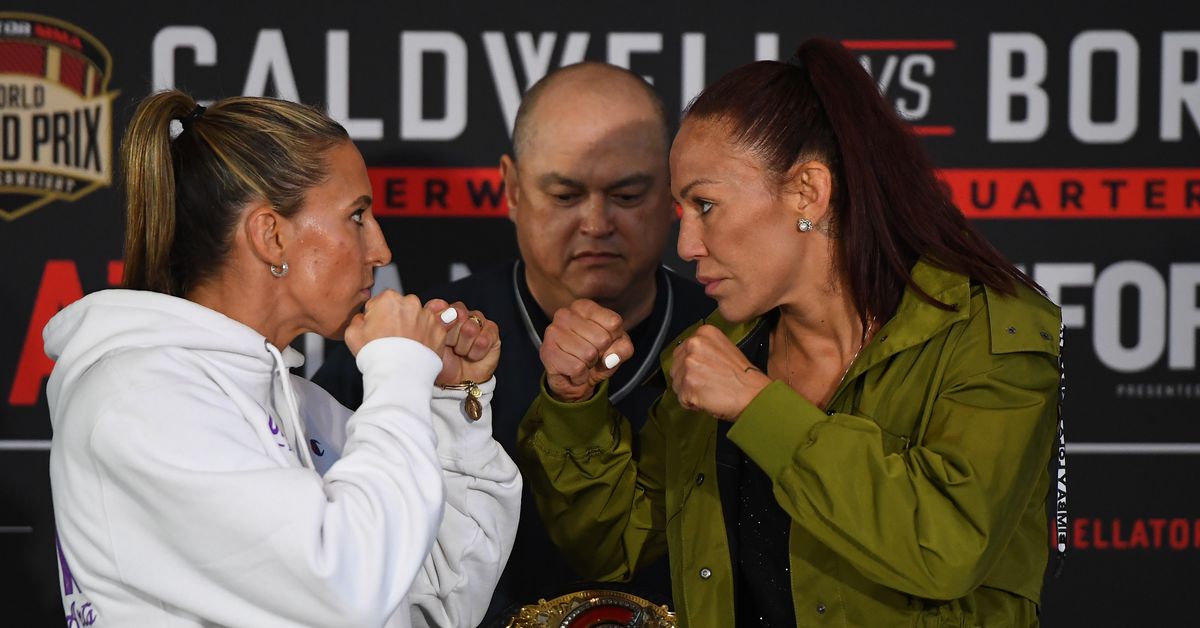 Bellator 238 “Budd vs. Cyborg” took place Saturday, Jan. 25, 2020 at The Forum in Inglewood, California. Featherweight world champion Julia Budd (13-2) took on the most fearsome striker in the history of women’s MMA in Cris Cyborg (21-2, 1 NC).

Cyborg rushed Budd early firing body shots and looking for a clinch, but Budd was able to overpower her in close quarters and put Cyborg’s back on the fence. Cyborg would break, then rush, then end up on the fence again. Budd got on top when Cyborg slipped on a kick but accidentally grazed her in the head with a knee. Mike Beltran stopped the action but didn’t deduct a point since Cyborg seemed uninjured. She fired off ferocious shots after the restart to win the first round and dominated the second frame with clinch work and knees.

The third round was 50/50 until Cyborg overpowered her with a right hand, catching the leg and taking her down in the process. She stood up and then jumped to side control, throwing elbows to the body and a ground and pound flurry late to take her third round.

The fourth and final round was the one where Cyborg’s striking finally broke Budd. She crushed the distance between them and lands a right hand to the body that folds Budd in half a second later and Beltran rushed in to stop the action as Budd couldn’t defend.

The official time was 1:14 via TKO for the new Bellator Featherweight champion. After Michael C. Williams made it official she spoke to “Big” John McCarthy.

“Thank you for everyone coming here, Cyborg Nation. I say thank you God for having this opportunity. He’s amazing. I wish the best for you guys. I feel very happy. I train very hard for this title. I respect Julia so much. She remain a long time undefeated. I would like Scott to make a grand prix, it’s my dream, like the Chute Boxe style in Japan.”

The crafty Caldwell got a takedown and took the back when Borics tried to get back up, hitting him with elbows until he made a mental mistake and gave up his neck for the rear naked choke at 2:20. Caldwell did a backflip to celebrate but then gave the distraught Borics a hug before the result was made official. “Big” John McCarthy was his next stop.

“Man, all the credit goes to Jacob Benny, Ben Jones, Brandon, honestly, this is my night, this is my tournament. I’ve got a few things to say. For one — Shaquille O’Neal I challenge you to a one-on-one. T-Wood you can’t rap, I got bars. I see this man (A.J. McKee) standing over my shoulder. You want some? Come get some!”

Bellator newcomer Sergio Pettis (18-5) would have his hands full with Alfred Khashakyan (11-4) at 135 lbs. given the latter had won his last three fights by knockouts.

Pettis gave up height and size to Khashakyan but not reach (69”) nor power, as he smashed his foe with a right hand then poured it on with heavy rights on the ground until he trapped Khashakyan in a guillotine choke for the technical submission at exactly three minutes of round one. Pettis spoke to John McCarthy next.

“Hey man, thank you Bellator fans. My first time in L.A. so I had to show out. Whattup West coast? I knew it was over, I knew he was hurt, I went in there with a killer mentality today. I’ve had a lot of decisions I wanted something new, almost had the knockout, got out the submission. I just got my black belt that signifies it. Thank you coach.”

Flyweight boxing champion and undefeated MMA fighter Ava Knight (1-0) would face a pro whose husband joined her on the main card in Emilee King (3-3).

Unfortunately when it comes to MMA no amount of world titles in boxing can prepare you for a relentless ground game, and King transitioned from one submission attempt to another until she got a rear naked choke at 2:18 of Round 1. Emilee King spoke to “Big” John McCarthy after the victory was made official.

“Hi Knoxville! It felt good but first I want to say all glory to God, thank you to all my teammates at home, and my husband is up next — yay! I had to trust in my coaches, trust in my skills, you come in the cage by yourself but you don’t get there by yourself. The other submissions weren’t there but that last one was like ‘I’ll wait this one out.’”

His wife’s success did not transition over to his bout as he was outgunned by the precision striking of Daniels. He’d knock King down and let the referee stand him back up, then countered a leg lock set up with vicious ground and pound for the stoppage at 3:07 of Round 1. Daniels spoke to John McCarthy.

“I felt amazing John. It’s always good to see you suited and booted sir. I was just making him stay in my area. It’s the evolution of my fighting game in the MMA world. I feel absolutely amazing. Day after day I’m continuing to evolve my game and show everybody who I am, the greatest of all time, but still put God over all things.”

Ryan Bader spoke to Mike Goldberg about a just announced card for SAP Center in San Jose on May 9th where he’ll defend the Light Heavyweight title against Vadim Nemkov.

“I came in, won the title at 205, got asked to come up to the Heavyweight tournament and ended up winning that belt. I’m a 205’er though and I’ve been that my whole career. I always knew I was going to come back down. I wouldn’t have held up that belt if I wasn’t going back down. Now it’s time to defend the Light Heavyweight title again. I did a test cut to 213, I felt great, and now I’m at 225-230 so I know I can get down there easy. Obviously I can get down there, I’ve been doing it my whole life.”

Rounding out the card was a “consolation bracket” of sorts from Bellator 228 pairing Juan Archuleta (23-2) against Henry Corrales (17-4). Archuleta controlled the first round by forcing the smaller Corrales to chase him down on the outside, stepping in and out of the range with precision and making Corrales miss more than he hit. Archuleta edged out the round but a late flurry left The Forum aching for more exciting action.

The next two rounds were more of the same, with Inglewood and even referee Blake Grice imploring the fighters to engage more. In the third round Corrales finally managed to tag Archuleta with a few hard shots but it was too little too late in a unanimous 29-28 decision loss. No post-fight interview followed.