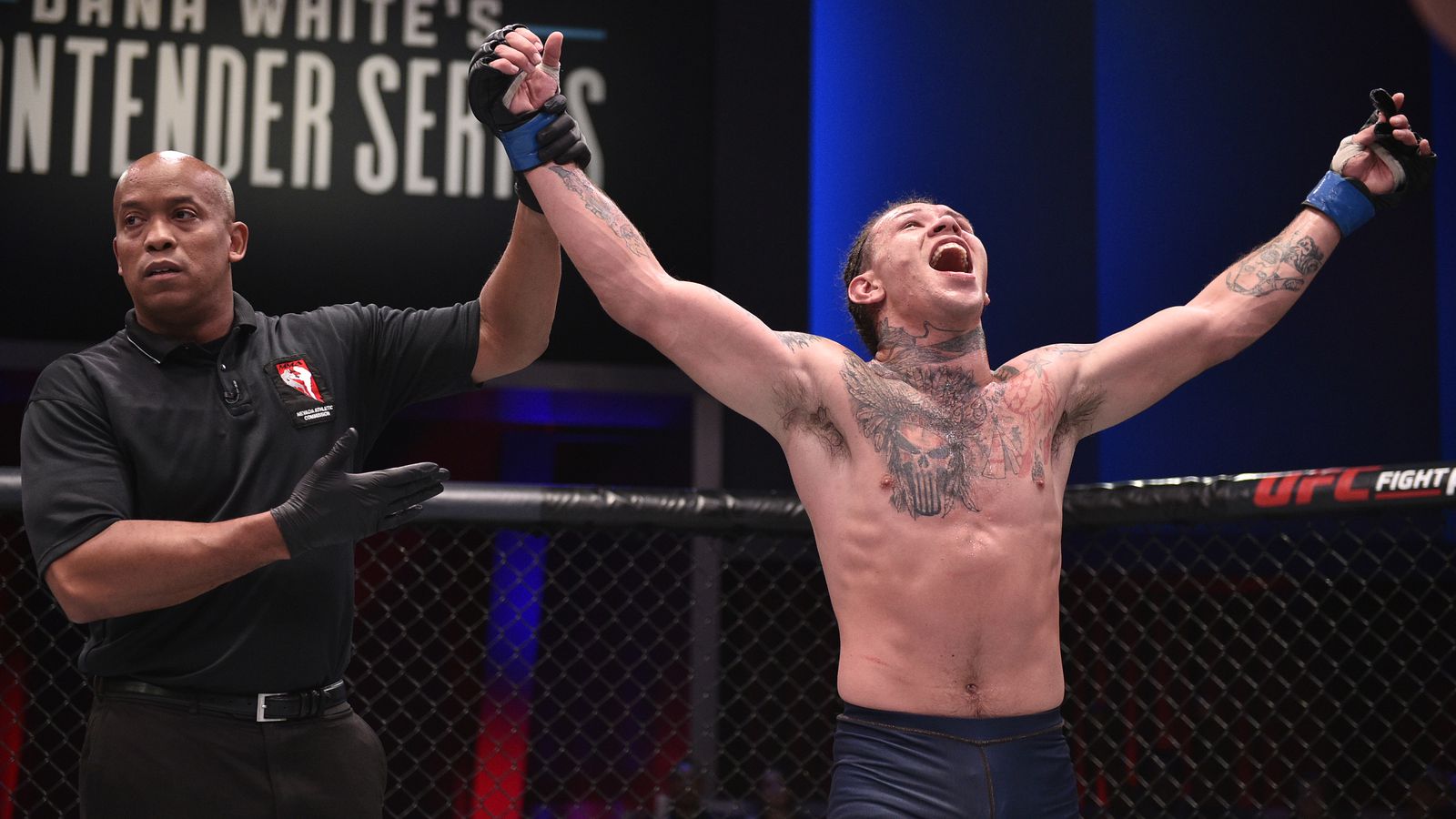 No huge names on ESPN+ this weekend (Sat., Feb. 15, 2020), but we’ve got several strong match ups to look forward to inside Santa Ana Star Center in Rio Rancho, N.M., not to mention some new faces. On this edition of “New Blood,” the series where I start warming up to Fight Pass’s redesign, we look at a fresh trio of “Contender Series” veterans, two of whom had very different experiences on the show than the third. As usual, everyone’s bouts from said program are on Fight Pass.

But before that, I’d like to make an apology for the lack of “New Blood” last week. I was out of the country from Jan. 26 to Feb. 7, so I submitted my weekly articles before I left. At the time I left there were no scheduled debuts on UFC 247 — Kalinn Williams had not yet replaced Dhiego Lima against Alex Morono and the Youssef Zalal-Austin Lingo fight hadn’t been booked.

Unbeaten in mixed martial arts (MMA) since 2016, Weaver brought a six-fight win streak into “Contender Series,” moving from Lightweight to Welterweight for two of his wins in Island Fight. He was supposed to face Leon Shahbazyan on “Contender Series,” only for the Glendale FC-trained product to withdraw and leave “Chata Tuska” to beat Devin Smyth by decision two months later.

He pulled out of a planned Octagon debut opposite Thomas Gifford in Oct. 2019.

Persistent pressure is the name of Weaver’s game. Though a fairly big Lightweight at 6’0,” he’s got fast, crisp southpaw boxing predicated on rapid 1-2s and 3-2s. He does a remarkable good job of pulling out of range of incoming fire despite his upright chin, going right back to his advance afterward, and is happy to rip the body if given the opportunity. When he’s got his man hurt, it’s an endless flurry of right hooks and heavy straight lefts, and while that stout range management tends to falter as he overcommits, his chin is generally stout enough to survive his indiscretions.

His grappling is generally strong both offensively and defensively. He showed some solid takedown chops against Hill, flurrying his way into one and working on the ropes to secure another, and the Smyth fight was basically an extended audition for his takedown defense. Even when Smyth did manage to drag him to the mat, Weaver did a great job of using the fence to stand and pummeling his way into more advantageous clinch positions. Of note was his ability to stay on his feet even when Smyth set up his shots with rapid level change and hard shots upstairs.

As far as weaknesses, he’s trigger-happy with his guillotine, which has cost him position in the past. In addition, as mentioned, he tends to leave his chin untucked, which is fine when he’s got the presence of mind to fade back; however, it’s a liability in all-offense mode or when he’s stuck against the fence. Plus, he doesn’t hit that hard or kick much, and while you don’t have to have a kicking game, it’s damn useful.

Opponent: He meets Rodrigo “Kazula” Vargas, who got wrestled to death by Alex da Silva last time out. Weaver can win this easily if he leans on his takedowns, but he’s also skillful and durable enough to get the “W” on the feet should he decide. Either way, expect a comfortable win for the Octagon newcomer.

Four consecutive stoppage wins earned Rodriguez a spot on “Contender Series,” where well-timed takedowns carried him to a decision victory over Rico Farrington. Though the effort didn’t earn him a contract, leaving him to pick up a knockout win on the regional circuit last December, he answered the call when Ramazan Emeev withdrew from his match this upcoming Saturday.

Rodriguez definitely fights like someone with little interest in going to the judges. He has a flicking, noncommittal jab and some naked kicks, which he targeted low against the towering Farrington and high against the shorter Ivan Castillo, but the pièce de résistance is an overhand left to which he commits every bit of bodyweight he can muster. While it’s got some thump, it’s an all-or-nothing play; his footwork and balance dissolve when he throws it, leaving him wide open to return fire and making it difficult for him to follow up well against a mobile opponent.

To make matters worse, the Farrington fight showed Rodriguez’s tendency to just pursue in a straight line rather than slip shots or angle his way in. Farrington found considerable success keeping Rodriguez out of the pocket by keeping his jab in his face.

One thing Rodriguez does well but not enough is wrestle. He scored a pair of round-stealing takedowns against Farrington, then moved to mount and did some decent damage when he bothered to shoot midway through the third instead of at the end. He’s shown solid passing and good balance to posture up for ground-and-pound once he reaches a dominant position. I’d honestly like to see him dial back the brawling and focus more on this part of his game.

If he doesn’t, well, he’ll have a short Octagon run. Barring some very fortunate left hands or very favorable matchmaking, I don’t see him lasting longer than three or four fights in the world’s largest fight promotion.

Opponent: Tim Means has the power and technique to brutalize Rodriguez for his myriad striking flaws, and his defensive grappling is good enough that “D-Rod” can’t use his ground game as an ace in the hole. Rough debut incoming.

Young, a former King of the Cage Bantamweight Champion, got her “Contender Series” shot in Aug. 2019, only to lose to Sarah Alpar via second-round submission. She returned to action less than a month later, reaching the semifinals of Invicta’s one-night Phoenix Series tournament before running afoul of Miranda Maverick, and made another quick turnaround to defeat Maiju Suotama in Nov. 2019.

She replaces Nicco Montano, who injured her MCL (details), on less than one week’s notice.

Young’s got some range for the weight, standing 5’7” with a 67-inch reach, and she fights to maximize it on the feet. She’s got a stiff jab that she mixes nicely with hooks and up-jabs for variety, alongside a hard right cross to complete the 1-2. The announcers in her recent fights stated that she’s fond of lead-leg kicks, and while she didn’t use them in the tape I saw, she was up against some determined takedown artists, so I’m willing to assume that’s something she uses when it’s safe. Should opponents get inside her reach, she’s also shown some nasty knees.

Her key issue on the feet lies in maintaining range. Her head tends to follow her right hand towards her opponent, leaving her open for counters or clinches; the 5’3” Alpar managed to tag her repeatedly despite facing a four-inch reach disadvantage. In addition, she backed to the fence and punched without moving her head or legs after getting clipped, which is a great way to get clocked by a shorter fighter.

Her wrestling, in which she has a solid background tends toward the defensive, and she generally does a good job of stopping the initial shot. When Suotama started running out of steam and struggling to drive through her hips, Young casually sprawled on her and did some damage from there. She also showed good ground-and-pound against Suotama when she ended up on top, using her height to get leverage for heavy punches.

The problems arise when opponents look to chain wrestle and stay on her as she works her way up. Three times I’ve seen her taken down near the fence and three times I’ve seen her give up her back in the exact same way while trying to stand. Persistent wrestlers are going to have a field day, especially considering the aforementioned range issues.

Young’s capable enough on the feet to get a couple of UFC wins, especially considering the dire shallowness of the 125-pound division, but don’t expect her to go terribly far.

Opponent: She’s moving back up to 135 pounds to face Macy Chiasson, and for all the vulnerability Chiasson showed in her fight with Lina Lansberg, Young’s screwed. Even without taking into account the massive size difference, she doesn’t have much to stop Chiasson from either battering her against the fence or muscling her to the mat and, well, battering her against it. A Young win would be among the biggest upsets so far this year.

Remember that MMAmania.com will deliver LIVE round-by-round, blow-by-blow coverage of the entire UFC Fight Night 1667 fight card this weekend RIGHT HERE, starting with the ESPN+“Prelims” that are scheduled to begin at 5 p.m. ET, then the main card portion that will also stream on ESPN+ at 8 p.m. ET.

To check out the latest and greatest UFC Fight Night 167: “Anderson vs. Blachowicz 2” news and notes be sure to hit up our comprehensive event archive right here.