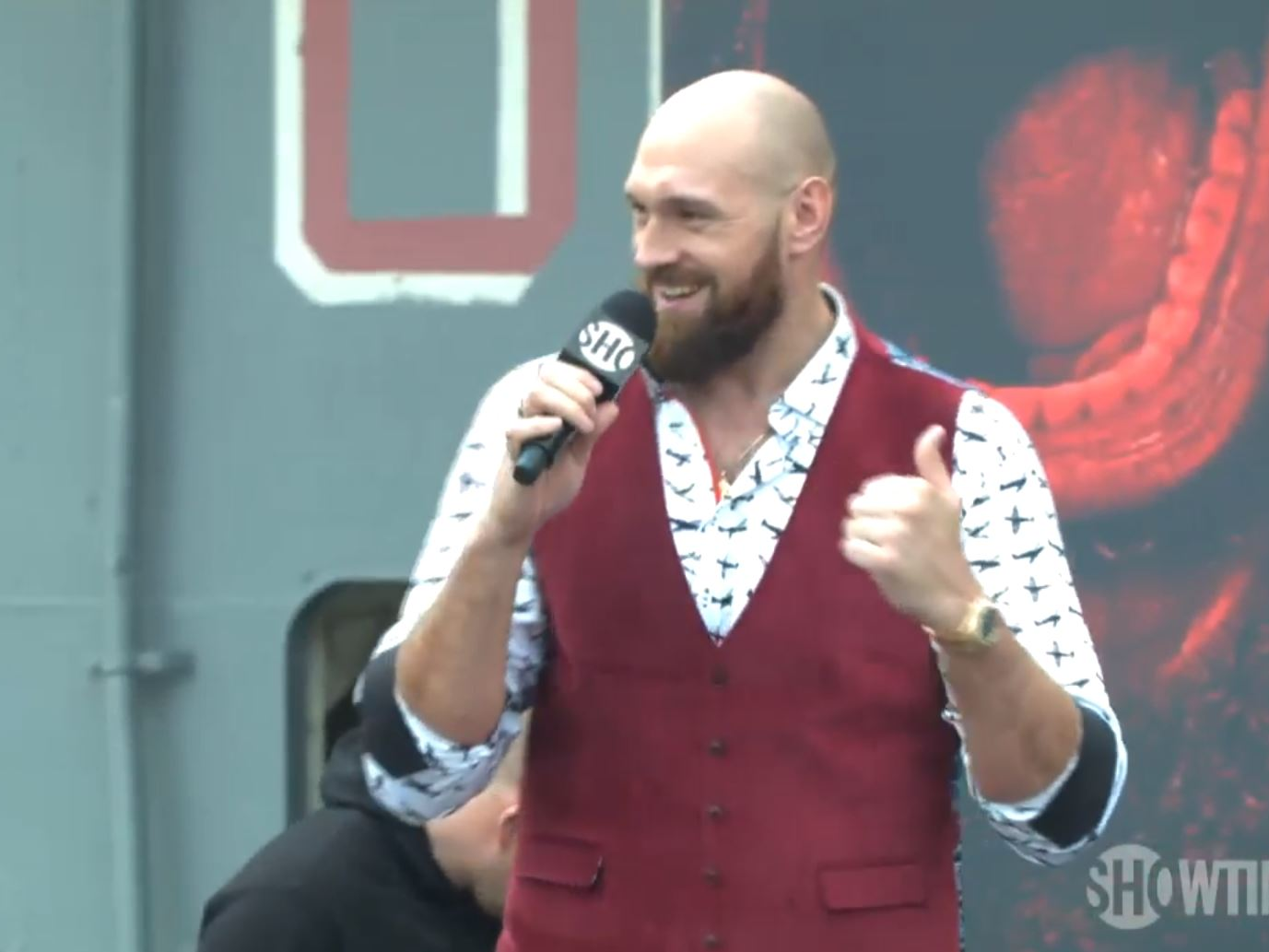 Tyson Fury and Deontay Wilder went head to head for the second time this week with a press conference in New York.

Spoiler alert: They both promised to knock each other out.

Relive the press conference by watching the above video, and scroll down for all of our witty comments preserved here forever.

The pair will finally be allowed to hit one another on 1 December, in Los Angeles.

Tyson Fury: “Last note, I’m going to knock this bum spark out. And you heard it here first.”

They’re both booted off stage, with those in attendance loudly singing in support of the Brit.

They’re trying to take questions from the press but Tyson is busy pulling up Deontay’s trousers to reveal his ankles. “Skinny little ankles like a child” is the verdict.

Wilder now squaring up to Fury, again, only for the latter to dance around him bragging about his superior movement.

Some unseemly banter about erections and ejaculate now, but this is a family blog and I’m not going to stoop as low as to type all that muck out.

Tyson asks if he wants a slugfest.

“I’m a crazy man. I want a war with this little plum. I want to break his ribs. I’m going to make this bum quit. Does he even think they give lineal heavyweight championships away? This man has never fought a champion. And this idiot thinks he’s going to beat something.

You all know he works for me right? He’s a dosser, carries my bags around.”

Tyson encouraging the crowd to sing “THERE’S ONLY ONE, TYSON FURY”. Bit embarrassing for Wilder, this is his home crowd after all.

Deontay starts singing too but nobody joins in.

Deontay shouts “I PROMISE I’M GOING TO KNOCK YOU OUT” and then rubs his forehead all over Tyson’s face. It’s all getting a bit Mills and Boon. Steamy.

Uh oh, they’re squaring up. Tyson shouting at Deontay to take his sunnies off. Now he’s singing, looks a bit like they’re going to kiss. That would be lovely.

Tyson asked about his legacy.

“To win would be a dream come true. But when I win I’m going to let him keep his belts. I don’t want that belt. I want the Tyson Fury limited edition WBC belt.”

Deontay asked why he took this fight.

“I dared him to come back for this very moment. I want him to have confidence and high energy. His face will get smashed up and his body will be on the pavement. He’s so nervous right now.

“And I’m watching my figure man. Let me see your body.”

Tyson: “We all know I’ve got a fat stomach but it’s going to look worse when I knock you out.”

Tyson asked about his confidence.

“I want to thank everybody for turning up. And even Deontay knows to sit down in the presence of greatness. He can’t box, he’s knocked bums out, he fights tomato cans who can’t fight back. He’s not going to land one of those windmills on my chin.

“His arse is going to fall out. How am I going to let this skinny little spaghetti hoop man beat me? I didn’t come here to be embarrassed by this little runt.”

Deontay: “People want to see knockouts and I deliver that each and every time. I promise you I’m going to knock out the gypsy king.

Deontay asked about his legacy.

“This fight means everything to the division. This division was in a bad place. People thought it was boring with not enough great fighters. Today’s era is different. We have me and we have Tyson Fury, guys with big personalities. We have bought this sport back to life.”

Time for acknowledgements. Will skip this bit if you don’t mind, ta.

“The buzz around a big heavyweight fight is unique. These are two huge figures literally and figuratively. It’s a fascinating clash of personalities and styles.”

Stephen Espinoza next up on the mic. Somebody in the crowd calls him a weasel. Lol.

What happened at the first press conference?

Fury accused Wilder of running scared and even claimed the WBC heavyweight champion is an awe of him, writes Declan Warrington.

Fury said: “He hasn’t got what he says he’s got. I see fear in Deontay Wilder, I could sense his heartbeat through his suit.

Fury has been accused of only taking such a dangerous fight, just the third of his comeback, for the significant purse he will be paid.

The powerful Wilder has stopped each of his previous 39 opponents, but Fury also believes that the American is wary that will not be enough.

“I don’t need anymore fights,” he said, having previously revealed he would have preferred a further warm-up before December, which could define his career.

“I don’t need one more fight. If it’s going to be his easiest fight then he should knock me out in one round, shouldn’t he? With one punch.

“(Wladimir) Klitschko was a proven puncher who banged me right in the chin – it didn’t do anything. He was catching me throughout the fight with big shots – it didn’t do a thing.

“Everyone who’s a massive puncher can’t take one back, because they load up with everything, leave themselves wide open, and wallop. All of a sudden they’re looking up at the stars.

Fury had a similarly-aggressive exchange with Klitschko at the first press conference to promote the fight he unexpectedly won in November 2015.

It was later largely felt that he had got under the then IBF, WBA and WBO champion’s skin, but Wilder said: “Guys try to get into my head because my mind’s so strong.

“He thinks that by talking like he did with Klitschko, and getting inside his head, it’s going to be the same thing, but I’m a different person. You can’t do that with me.”

Asked about a rumoured rematch clause in his contract, in the event of a Fury victory, and if that meant a rematch could take place in the UK, he responded: “There’s a lot of things in the contract. Anything could happen – I’m going to fight over here eventually, one day, whether it’s Fury, whether it’s (Anthony) Joshua, whether it’s (Dillian) Whyte.”

What’s next for Jan Blachowicz and Corey Anderson after UFC…

Coach: Israel Adesanya will ‘definitely look to move and…

Diego Sanchez and coach slam Joe Rogan and the media after…

ONE: King Of The Jungle To Be A Closed Event