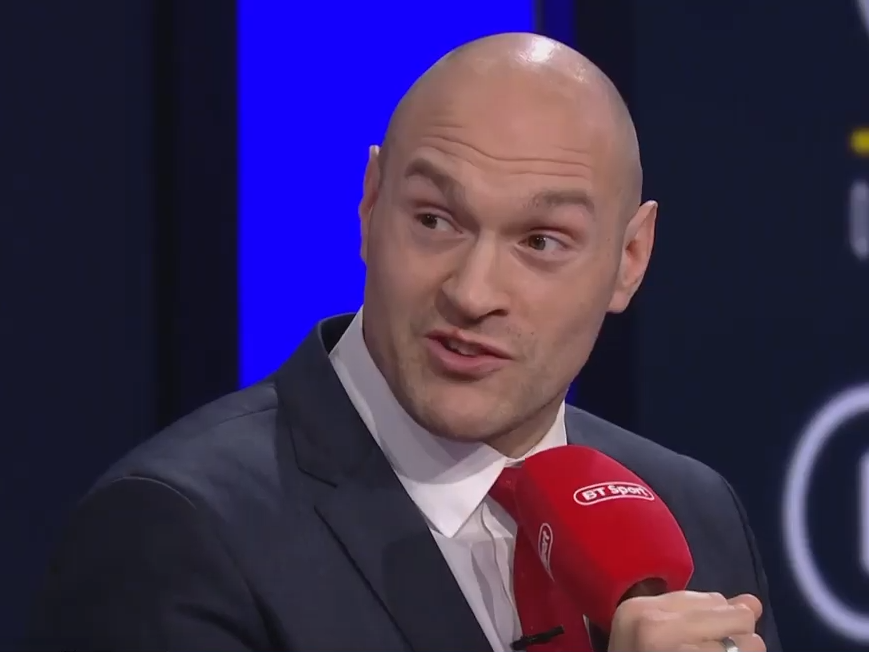 Fury will now fight exclusively on ESPN in the States, in a reported £80m deal, while Wilder has a longstanding relationship with rival network Showtime, bringing negotiations between the two camps to a restart.

Fury confirmed that he would like to make his debut on ESPN before the end of May, and is welcome to all challengers.

Get the best of The Independent

Get the best of The Independent

Relive all the action from the press conference:

We signed for Golovkin twice and that didn’t happen, so we’ve got to make something happen. Callum Smith, DeGale or Eubank, the harder the fight is for Bill, the more you get out of him.

Boxing is one of those sports. Someone can be a superhero for one night, then they get beat the next night and nobody knows them again. It’s about how you present yourself, and I didn’t really do myself any favours in 2018.

I didn’t do anything wrong with the drugs. From the BBBoC eyes, I did nothing wrong. It was only VADA who weren’t happy with what they found. I alleged failed on the Wednesday and passed on the Saturday. The video incident was just getting carried away with myself a bit. I’m putting all that behind me now. I want to get back bigger and better than ever.

I got Tyson Fury who I look up to, to chat to every day, and it gives you that little bit more belief. I’m here, I’m fighting for the super-middleweight world championship. Will I be a better fighter, time will tell.

Am I going to cry if the Joshua fight never happens? No.

Where does Anthony Joshua fit in all this:

We tried to make the fight. It’s a 50-50 fight, they tried to keep all the money. No one approached us to try and make the fight at all… We’re on a bigger platform now with more subscribers. They’re going to have to come to us now.

How much do you burn for the rematch?

To be honest I’m happy with whatever happens in my life. I’m healthy and well sat here on the same night Adonis Stevenson got brain damage. It’s a dangerous sport. I’m very happy just to be sat here fit as a fiddle, as healthy as a trout.

I’m just a fat bald-headed fella who’s naturally gifted I suppose. I’m very proud of what I achieved because, when I was young, the odds of becoming a world champion was astronomical. I’ve been on an amazing journey, and as long as the sun shines there’s going to be some rain too. I’m sat here as a man who’s had glory, fame and a lot of pain too.

I get a lot of support. The support I’ve had over the last few months has been great, it’s been a fantastic journey. Everyone knows what happened by now: I was down and out, 28 stone, addicted to drugs and alcohol. Look at me today, as fit as an adonis, it’s a Cinderella story and I’m living it.

Fury on the Wilder fight:

I trained hard, it was what I wanted, everyone in my team said not to do it. I spoke to Billy Joe Saunders and he said it’s a dare to be great move. Who would have thought after two fights against low-level opposition that I could come back on that level.

Tyson needs to fight. It’s what he’s training all the time for. He wants to be active and he wants to become a big star. This ESPN deal is one of the biggest deals to ever happen to a British sportsman.

If you’re watching Deontay, I’m coming for you and this time you can’t rip me off.

As far as I’m concerned, the fight is more makeable now than ever because we have the biggest boys in the game behind us and I’m only a fighter. I can only fight who they put in front of me. I want the biggest fights., the Joshuas, the Wilders of the world, and everyone else out there too.

Tyson wants it, we all want it, and now we’ve got to make it happen. It’s a different situation now, Showtime’s not the only game in town, it’s changed dramatically and it’s up to us now to sit down and get it over the line.

It puts me right on top where I should be and now they’re going to have to come through me.

ESPN is the biggest sporting network in the world, combined with BT Sports, so I’ll have dual viewers from America and the UK and it gives me an opportunity to be shown to the most people, and be in the position not to be an opponent. They have to come to the Tyson Fury show now.

Here we go then.

It is understood Tyson Fury has signed a promotional deal with ESPN and Bob Arum’s Top Rank, reportedly worth as much as £80m, leaving hopes of a hotly anticipated rematch with Deontay Wilder in doubt.

The pair’s heavyweight blockbuster in December was aired on rival US broadcaster Showtime, who Wilder has worked with exclusively throughout his career.

Please allow a moment for the live blog to load…