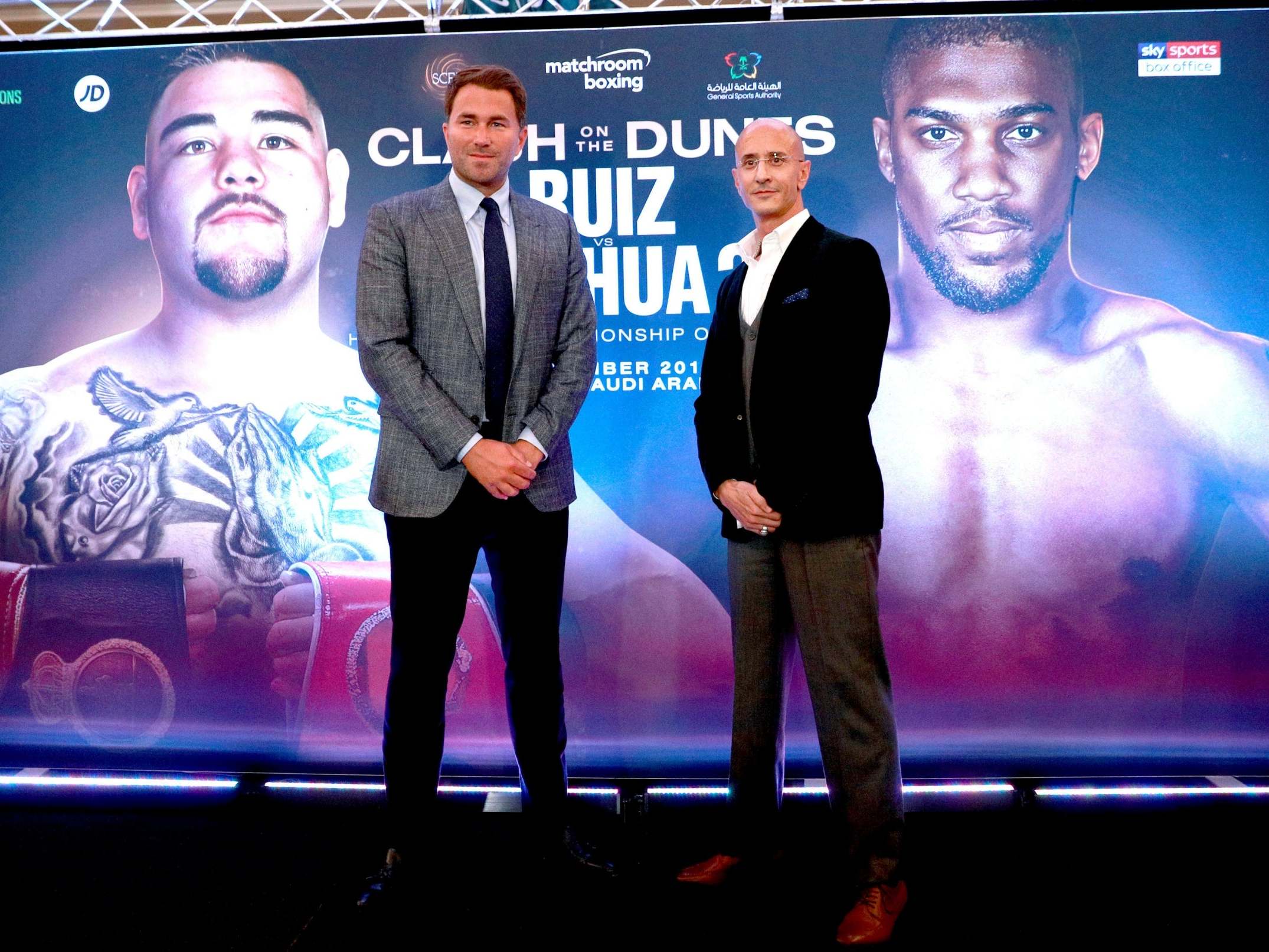 Andy Ruiz Jr has ‘100 per cent signed’ the contract to face Anthony Joshua in their controversial rematch in Saudi Arabia on 7 December, according to promoter Eddie Hearn.

It was announced on Friday that the heavyweight pair would meet in Diriyah, an area just west of the Saudi capital Riyadh, in the winter in a rematch of their memorable June 1 meeting.

In New York’s Madison Square Garden that night Joshua was dropped four times en route to a seventh-round stoppage at the hands of Ruiz, who became the first fighter of Mexican descent to win the world heavyweight title.

It was expected that the pair would meet for the second time back at Madison Square Garden while Cardiff’s Principality Stadium also emerged as a contender to play host for the encounter only for Saudi to trump them both.

However reports at the weekend suggested that Ruiz had not signed any contract relating to the fight which had seemingly left the whole event in doubt.

But Hearn and Omar Khalil, the managing partner of Skill Challenge Entertainment, held a press conference at the part-Saudi-owned Savoy in London to formally confirm that the rematch is headed for the Desert Kingdom – and that Ruiz has already penned his side of the deal.

“He would have taken much less to be honest with you. Once he wins the first fight, every man and his dog from his local gym is telling him he should be getting this and that.

“The deal was very fair, the deal was negotiated and everyone who signed that deal, whether it was Tom Brown, his promoter, whether it’s Ruiz himself, Al Haymon, his management company, they all know their obligations.

“That process was discussed with them and they said they would be a lot more comfortable to go to Saudi Arabia and once that decision was made, the contracts were signed last Wednesday or Thursday, myself and Tom Brown emailed the governing bodies to let them know the date of the fight, the venue for the fight and that process is confirmed with the governing bodies.”

And, on the eve of the second Ashes test match just down the road at Lord’s, former Essex cricketer Hearn played all questions regarding the many human rights issues in Saudi with a straight bat.

Amnesty International criticised the choice of Saudi as host due to human rights violations, the ongoing conflict with the Yemen on the southern border of the country and the murder of journalist Jamal Khashoggi.

But when asked whether Hearn, as a promoter of sport, had any personal reservations about staging an event in the region, he said: “When we made the decision, I knew that not every response would be positive, I knew there would be criticism and controversy.

“I’m a boxing promoter. Sometimes the criticism and the curiosity will lead to an event of an extraordinary magnitude.

“In that respect, no-one really knows what to expect in Saudi Arabia for this event, other than the people involved in it, who know what’s coming, who know the vision, who know the arena that’s being built and who know the infrastructure.

“I’m that confident in it and that’s what made me decide to go ahead with it. And the support of Anthony Joshua to say “we believe in this as well”.

“I’m very calm because it’s a decision made by myself, the Anthony Joshua team, the business. We have to weigh everything, we have to look at the infrastructure, the logistics and our commercial predecessors who have been in the territory, and to speak to our partners and look at the vision of what they are going to do.”

It has also been claimed that the process for fans hoping to visit Saudi for the fight, which will take place at a custom-built, 12,000, open-air venue, will be easier than ever before.

Khalil said: “When you buy a ticket you will automatically receive a visa which last until 30 days after the event, so you can enjoy the event and then spend 30 days to enjoy the cities, sightseeing. That includes women.”

Hearn added: “If you buy a ticket you get a visa. It’s not difficult to go there – it’s a six-hour flight. We want to make sure there are as many Brits and international fans as possible.”