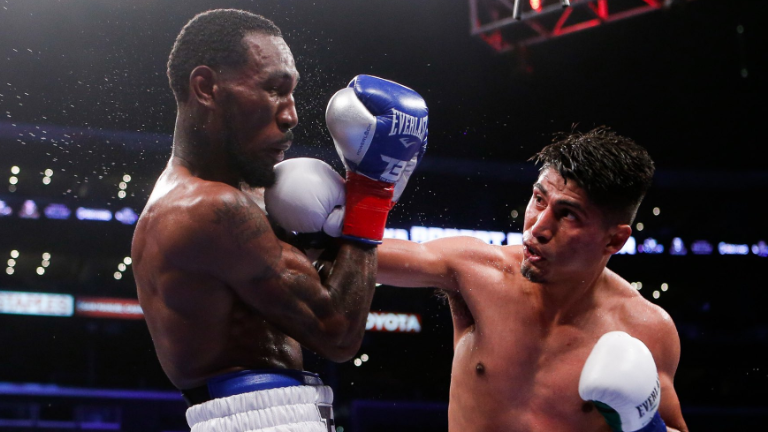 Even though Mikey Garcia suffered the first loss of his pro career in the biggest fight of his career this past April, the former multi-division world champion may be in for the biggest windfall of his career.

In an interview with Boxing Scene, Garcia’s trainer and older brother, Robert, claims that Al Haymon, Bob Arum, Oscar De La Hoya, and Eddie Hearn have all made offers for his services.

“Mikey does not have a contract with anybody,” said Robert Garcia. “He’s pretty much a free agent. That’s why Matchroom has been making him offers. What Matchroom has offered is huge. It’s an offer that’s hard to say ‘no’ to.”

With only one fight at 147 pounds interesting the Garcias, that being against Danny Garcia (no relation), their focus is a return at junior welterweight.

“Spence had an answer to everything Mikey tried,” Robert said of his brother’s loss to Errol Spence this past April. “But there’s also other fights. I would love Mikey to fight [Vasyl] Lomachenko and in the future someone like Terence Crawford. The Lomachenko fight I would like for sure, if it was up to me.”

While it is unsurprising that these promoters came to the table to talk with the California native, Bob Arum, Garcia’s former promoter was a shocking name to see listed alongside Haymon, De La Hoya, and Hearn, following a legal battle that kept Garcia out of the ring for several years.

Arum as recently as this year blasted Garcia in the media over the acrimonious end of their relationship, but now with money on the table, Top Rank is ready to talk.

“F*** bad blood. What are you nuts?” Arum said earlier this year. “For me as a promoter, it’s the Benjamins for Christ’s sake. It’s a big fight. It’s a fight everybody wants. I don’t have to love [Mikey]. I would take a lot of joy in Loma beating the shit out of Mikey.”

“Mikey is in a good position right now because he gets to hear everybody. He’s got quite a few options,” said Robert Garcia of his brother’s position in the open market. “I know that when he makes the decision, it’s going to be the best one out there for him.”